Apple CEO Tim Cook is in Paris today ahead of a meeting with the French president Emmanuel Macron at 4:15 CEST. Before that meeting happens, Cook has a full itinerary for his day and the CEO has been documenting parts of his travels on Twitter.

Cook's first Tweet noted his visitation to Eldim, a company based in Normandy that specializes in creating advanced optical metrology tools. Eldim is a component supplier of the upcoming iPhone X, providing Apple with critical components of the iPhone X's Face ID biometric security system. 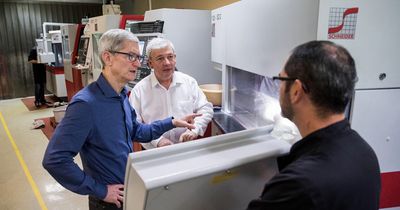 Specifically, Eldim is said to be responsible for the eye detection abilities of Face ID -- a crucial factor in Apple's new software, which can detect when a user's eyes are open (unlocking the iPhone X) or closed (keeping the smartphone locked). Eldim CEO Thierry Leroux called the collaboration with Apple "an incredible adventure." Leroux further stated that, "for us it was a bit like sending someone to the moon." Tim Cook was said to have responded with a congratulations and telling the company and its 42 employees, "it's great what you did for us!" (via Mac Generation and Ouest-France).

While in Normandy, Cook visited the Normandy American Cemetery and Memorial, which honors the American lives that were lost in Europe during World War II.

At Normandy, honoring those who made the ultimate sacrifice. “Think not only upon their passing. Remember the glory of their spirit.” pic.twitter.com/Unq6NXoe5y — Tim Cook (@tim_cook) October 9, 2017

Cook also made a surprise visit to a startup called "My Little Paris" where he shared a roast chicken with employees. My Little Paris specializes in recommending sites and attractions to see around the city. Originating as a weekly newsletter created by Fany Péchiodat and sent to her friends and family, the original idea has since evolved into a $42 million startup.

Next up should be Cook's meeting with Macron. The topics of discussion for this meeting are being kept secret, but the two men are largely expected to talk about the issue of corporate tax law in France. In August, France and Germany announced preparations to stop tech companies like Apple from exploiting tax loopholes in their respective countries, with Macron leading the crackdown on international tech companies in France.

Cook's visit to France in 2017 follows a troublesome period of months for Apple back in 2016, when the European Commission ruled that Apple received illegal state aid from Ireland and ordered the company to pay $14.5 billion in back taxes. Apple appealed the decision in December of 2016 by arguing the European Commission made "fundamental errors" in its ruling, but the Cupertino company has noted that it expects the case to continue for several years.

In the wake of these reports, Cook called the tax avoidance claims "total political crap," writing an open letter that stated Apple has become "the largest taxpayer in the world," and that the company "follows the law and we pay all the taxes we owe."

Update: Cook also visited the offices of "CoachGuitar," an app that teaches users how to play the guitar.

Très impressionné par l’expérience @CoachGuitar. Congratulations on 6M downloads! We can’t wait to see what you do next. pic.twitter.com/O7RIjusuzh — Tim Cook (@tim_cook) October 9, 2017

Note: Due to the political nature of the discussion regarding this topic, the discussion thread is located in our Politics, Religion, Social Issues forum. All forum members and site visitors are welcome to read and follow the thread, but posting is limited to forum members with at least 100 posts.
Tags: Tim Cook, France
[ 77 comments ]

Get to work Tim.

Jesus Christ, can you guys give it a rest?

I swear to God, Cook could find a cure for cancer and you guys would find yet another reason to s*** on him. As an Apple stock holder, he’s doing just fine.
Score: 26 Votes (Like | Disagree)

GrumpyMom
Oh goodness I need more coffee. I completely misread the headline and thought the iPhone parts supplier was called “Normandy Cemetery.” Goodness. Gave me quite a start.

I can’t imagine the emotional impact visiting that site in person must have. I hope for a chance to visit it myself someday. Well done to Tim Cook for paying his respects there.
Score: 15 Votes (Like | Disagree)

I have visited Normandy and I can tell you it is a very humbling experience, as is when you visit Dachau in Germany..... A lot of good people lost their lives, so we could live a better life...

I can imagine the feeling. I remember when I first visited the Vietnam War memorial in DC. In those days people were very vocal in their criticism of how different it was from traditional memorials. But when I saw all those names I was...there are no words for how I felt.

Especially as I looked next to me at my dad who managed to come back alive. Though truthfully the man who was deployed there a few months after I was born never really came back. I realized that comparing how he was in letters he wrote to my mom early in his deployment and how his personality was after he came back. But I did get someone back.

And each of those names on the Vietnam War memorial and each of those crosses in Normandy Cemetery represent not just one life lost but all the lives of all the people who loved and needed and wanted desperately for that soldier to come back to them and who had to adjust to life without them. I think that’s part of what we feel when we behold places like this: the weight of all those lives lost and all those lives changed as a result of loss.
Score: 13 Votes (Like | Disagree)

Oh goodness I need more coffee. I completely misread the headline and thought the iPhone parts supplier was called “Normandy Cemetery.” Goodness. Gave me quite a start.

I can’t imagine the emotional impact visiting that site in person must have. I hope for a chance to visit it myself someday. Well done to Tim Cook for paying his respects there.

I have visited Normandy and I can tell you it is a very humbling experience, as is when you visit Dachau in Germany..... A lot of good people lost their lives, so we could live a better life...
Score: 9 Votes (Like | Disagree)

I can’t imagine the emotional impact visiting that site in person must have. I hope for a chance to visit it myself someday. Well done to Tim Cook for paying his respects there.

I had the same thought when I visited Arlington cemetery. It’s crazy what’s happening today in US.
Score: 9 Votes (Like | Disagree)

meaning-matters
This is great. Nice that Mr. Tim Cook shares the story.
Score: 9 Votes (Like | Disagree)
Read All Comments