Nearly two weeks after being unveiled at an event in New York City, and with a week and a half still to go before it launches to customers on September 15, Samsung's Galaxy Note 8 smartphone has received its first batch of reviews posted online today. Many publications marked the Note 8's large 6.3-inch "Infinity Display" as a step forward for Samsung, compared the smartphone's "Live Focus" bokeh effect mode to Portrait Mode on the iPhone 7 Plus, and agreed that the lack of an explosive battery made the Note 8 a solid contender in the smartphone market.

Most reviews touched on comparing the Note 8's new dual rear camera system to that of the iPhone 7 Plus, and Engadget found that each smartphone's bokeh effect largely provides the same finished products, although Samsung's device has the edge in features. Unlike the iPhone 7 Plus, the Note 8 lets you change the blurring effect both before and after the picture has been taken, so that if the effect is too enhanced, it's easy to dial back a UI toggle and find a happy-medium spot where the Live Effect looks better. 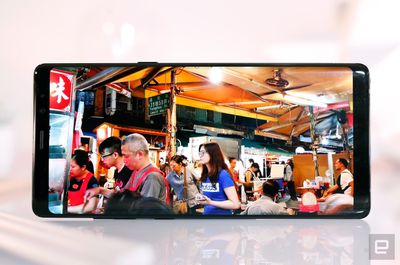 Images via Engadget
On the other hand, in the camera's UI and in the rest of the Note 8's operating system, Engadget noted that anyone who purchases a Note 8 will have to struggle with "a little software strangeness" in the Android smartphone.


Honestly, my biggest gripes have more to do with the camera interface than the cameras themselves. Let's say you're trying to zoom in on a subject. By default, you can tap a button to switch between 1x and 2x zoom modes, but it disappears for a while after you tap on the screen to lock focus and exposure. You can still pinch to zoom in and out, but it would've been nice if the shortcut button showed up again sooner. Shooting in Live Focus mode also offers close-up and wide-angle views of your photo, and you can switch between them in your gallery.

Strangely, there doesn't seem to be a way to save the view you didn't select as a separate photo, even though earlier demo units did it just fine. There's definitely a little software strangeness going on here, and while it's never outright frustrating, Samsung could have stood to polish these apps further.

PC World called the Note 8 "the best phone Samsung has ever made, bar none," praising the smartphone's display, fast wireless charging, and 6GB of RAM. The site said that the new Samsung smartphone is "at least as fast as any Android phone" that it has used, as well as the iPhone 7 Plus.

PC World ran an extensive battery test, and came to the conclusion that while the Note 8's battery is smaller than that of the Note 7 and Galaxy S8+, "the difference was pretty negligible." That's particularly emphasized considering that the Note 7's larger battery caused Samsung to recall the entire lineup last year.

In response, the Note 8’s battery is just 3,300mAh, which is smaller than the 3,500mAh batteries in both the Note 7 and the S8+. I’m no engineer, but my guess is that the S Pen slot, the extra rear camera, and an abundance of caution necessitated the downgrade. But fear not, because in my real-world testing, the difference was pretty negligible.

The Note 8 easily lasted through a full day of heavy use, and benchmarks hit the 9-hour mark, running circles around the Note 7 and even besting the Galaxy S8+. Samsung has clearly spent considerable effort optimizing the Note 8’s battery for the chip and the OS, so there’s no need to risk another disaster by squeezing in a too-large battery just to fill out a spec sheet. Simply put, the battery on the Note 8 shouldn’t be a concern, whether you’re worried about it lasting or exploding.

The site liked the three biometric unlocking methods available on the Note 8, including finger, eye, and face scanning. On the downside, most publications -- including PC World -- still question Samsung's decision to keep the fingerprint scanner on the right side of the rear camera system.

While The New York Times called the Note 8's display "the best screen" currently available for a smartphone, the publication lamented most of the device's security measures, calling facial and iris scanning "marketing gimmicks," as well as pointing out smart AI assistant Bixby's downfalls.

That brings us to what stinks about the Note 8. Some of the biometrics, including the ability to unlock your phone by scanning your face or irises, are so poorly executed that they feel like marketing gimmicks as opposed to actual security features.

At the end of the setup, Bixby explicitly says it is not perfect and it is working to improve all the time. So why should anyone use it? Nobody wants their time wasted by an assistant who is insecure and incompetent.

There are numerous other reviews floating around online for the Galaxy Note 8, all of which also comment on the smartphone's premium price point, which starts at around $930 and rises depending on storage capacity and carrier. Check out more reviews from the following sites: The Verge, TechCrunch, Wired, Quartz, TIME, Gizmodo, Mashable, and The Independent.


While comparisons are drawn to the current generation of iPhone devices, we're now exactly one week out from Apple's long-awaited debut of the so-called iPhone 8, iPhone 7s, and iPhone 7s Plus. The company confirmed the September 12 event last week with an invitation that said, "Let's meet at our place." The event will be the first held at the Steve Jobs Theater at the company's new Apple Park campus in Cupertino, California.
Tags: Samsung, Galaxy Note 8
[ 245 comments ]

richpjr
Glad to hear it getting praised - competition is good for all of us.
Score: 13 Votes (Like | Disagree)

Samsung has no design.

Are you kidding? The Galaxy S8 is the most beautifully designed phone I've seen yet. Compared to the rumoured iPhone 8 design with that fat notch on the top of the screen, the S8 still wins hands down in terms of design.
Score: 13 Votes (Like | Disagree)

farewelwilliams
still the worst position for a fingerprint sensor ever
Score: 12 Votes (Like | Disagree)
Read All Comments