At its "Unpacked" event in New York City today, Samsung unveiled the all-new Galaxy Note 8 smartphone, following months of speculation about the device's August debut. The event began with a recap video of the Note line's history, including user testimonies following the Note 7's fire-catching scandal and how they continued to support Samsung during the recall.

Looking forward at the new device, the Galaxy Note 8 has a 6.3-inch Quad HD+ Super AMOLED "Infinity Display," with an edge-to-edge screen that represents the largest screen ever on any Note device. The display has an 18.5:9 aspect ratio, which allows users to see more content than ever before, according to Samsung. This includes access to a new multitasking feature called "App Pair," which lets users create custom pairs of their favorite apps on the Edge side panel, simultaneously launching two apps to interact with them at once. 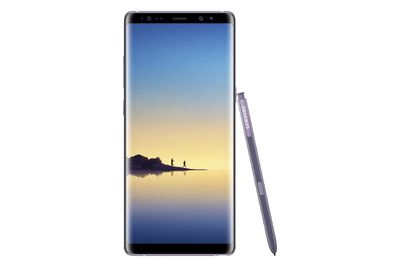 “We appreciate the relentless passion of the Note community. They’ve been a constant inspiration to us, and we designed the new Note for them,” said DJ Koh, president of Mobile Communications Business, Samsung Electronics. “From the Infinity Display to the enhanced S Pen, to the powerful Dual Camera, Note8 lets people do things they never thought were possible.”

The Galaxy Note 8 comes with a new and enhanced S Pen with a finer tip and improved pressure sensitivity. When using the S Pen, users can send "Live Messages" to handwrite text messages -- and add in special effects -- within the text message app. An enhanced screen-off mode lets users quickly jot down notes when the smartphone is turned off, and then save the note to view later.

On the photography side of things, the Galaxy Note 8 has one 8MP front-facing camera and two 12MP rear cameras, and includes optical image stabilization on both of the rear cameras. The rear-facing cameras include one wide-angle f/1.7 lens and one telephoto f/2.4 lens, while the front camera has an aperture of f/1.7.

A "Live Focus" mode lets users take a picture and control the depth of field of everything surrounding the main subject of the image, so users can adjust the bokeh effect before and after the photo is taken.

Expanding the ecosystem of the Note smartphone line, Samsung also introduced "Samsung DeX," which lets the smartphone communicate with a user's PC to seamlessly transfer between working on the go and at home or in an office.

A few websites have already gotten to go hands-on with the Galaxy Note 8, including The Verge, Engadget, CNET, and USA Today. Many sites pointed out the similarities of the device's dual-lens camera system to that of the iPhone 7 Plus, with Engadget noting, "Samsung has a camera setup excellent enough to make iPhone owners consider switching."

Those interested will be able to pre-order the Galaxy Note 8 starting tomorrow, August 24, and the smartphone will then go on sale September 15. In the United States, the device will be available in Midnight Black and Orchid Gray for carrier and Unlocked by Samsung versions, and customers will be able to purchase it at all of the major carriers, as well as Samsung.com, Best Buy, Target and Walmart.

According to a Verizon press release, the Samsung Galaxy Note 8 will cost $40/month for 24 months, or $960 at retail. The Verge reports that the smartphone will cost $930 at T-Mobile and $950 at AT&T.

For any original Note 7 owners, CNET noted that Samsung will be offering a discount on Note 8 devices: purchasing the smartphone through Samsung.com will allow previous Note 7 users to receive an instant trade-in credit of up to $425 when upgrading a current phone to Note 8. In addition, anyone at all who purchases a Note 8 between August 24 and September 24, 2017 has the chance to get either a free Samsung Gear 360 camera or a free Galaxy Foundation kit with a 128GB memory card and fast wireless charger.

For even more information on the Samsung Galaxy Note 8, check out the company's website.

nviz22
Great specs on paper, nice looking device. However, with Samsung's software, you're in for a rough experience because they are inconsistent with software updates and bog down over time.
Score: 34 Votes (Like | Disagree)

cracksoup
Yeah no thanks. The iPhone 6 has literally better RAM management with 1GB of RAM than Sammy has with 6GB of RAM. It's embarrassing at this point. Looks good though.
Score: 27 Votes (Like | Disagree)

Yeah no thanks. The iPhone 6 has literally better RAM management with 1GB of RAM than Sammy has with 6GB of RAM. It's embarrassing at this point. Looks good though.

dannys1
Mobile phones are quite boring at this point aren't they.
Score: 18 Votes (Like | Disagree)
Read All Comments