Ahead of the iPhone 8's predicted September announcement date, supply chain reports over the past few days have indicated a ramp up of 3D sensing components that are predicted to be destined for augmented reality and biometric security applications in 2017's high-end iPhone 8. In a research note by BlueFin Research Partners, "winners" for iPhone 8 component production are said to include Finisar and Lumentum for 3D sensing modules and Broadcom for wireless charging components (via Barron's).

Reports began building last week when iPhone camera component supplier Largan Precision confirmed that it will ship lenses for 3D sensing modules in the second half of 2017, while refraining from directly mentioning Apple and iPhone 8. In a recent quarterly earnings report, supplier Finisar made remarks that heavily suggested it will be "one of two or three suppliers" of vertical-cavity surface-emitting lasers (VCSEL) in the iPhone 8, according to LoupVentures. 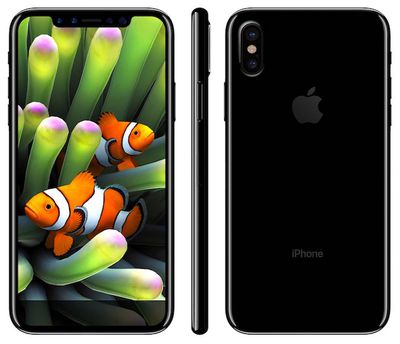 iPhone 8 rendering by Benjamin Geskin
Such technology could be implemented into the iPhone 8's rumored 3D sensing module and help "enrich the augmented reality experience" in the next-generation iPhone. Apple and CEO Tim Cook earlier this month detailed plans to back AR and its potential as an indispensable future technology with the reveal of ARKit, a developer platform that will provide the building blocks for consumer AR iPhone apps.

Likewise, Lumentum has announced that it expects to see volume shipments for its VCSEL lasers begin in the second half of 2017, timed with the annual production ramp up of iPhone manufacturing.

On last nights earnings call, Finisar management did not mention Apple by name, but they highlighted they expect to see volume VCSEL orders in their second fiscal quarter, which is the October quarter end of this calendar year. The company anticipates shipping “millions” of units during the quarter, but management also went on to say they anticipate unit shipments to be in the “10s of millions” in future quarters, which gives us further confidence 3D sensing and AR applications will be one of the focus features in the next generation of iPhones. In May of this year, Lumentum was the first VCSEL supplier to announce they anticipate volume shipments to begin in the second half of 2017.

We also want to highlight Finisar acknowledged they are shipping VCSEL lasers to multiple customers, but one customer (aka Apple) is accounting for the majority of total demand. We believe Finisar and others supplying VCSEL lasers are supply constraint and shipping everything they can manufacture. We believe Apple has secured a high percentage of all VCSEL lasers created, which we view as a large competitive advantage and will make Apple a leading AR player in the smartphone space.

LoupVentures further suggested that the significantly updated iPhone 8 will have a front-facing, low-end VCSEL laser and a rear-facing, high-end VCSEL laser, meaning that AR applications could take advantage of either camera. A long-running rumor for the iPhone 8 has been a dual-lens rear camera that could provide increased separation between the two lenses and allow for a greater difference in perspective, helping fuel better AR experiences. A front-facing dual-lens camera has been suggested as a possibility in the new iPhone as well.

In estimating the iPhone 8's cost, the site believes that Apple will add around $100 onto the cost of the smartphone specifically due to incorporating 3D sensing modules. That price comes to around $950 (with no storage tier size references), and largely falling into line with the new iPhone's predicted "premium" status.

In total, reports surrounding iPhone 8 component manufacturing have been increasing recently, with Apple said to be dominating the NAND memory chip supply chain and increasing shortages for an already strained section of component supplies.

NinjaHERO
Laser Iphone, mounted on a shark. I'm starting to see where they're going here. I like it. ;-)
Score: 7 Votes (Like | Disagree)

Amazing Iceman
There's more spying on Apple than on Russia or the U.S. :D
Score: 3 Votes (Like | Disagree)

iReality85
I hope that fish wallpaper makes a return.

In fact, I'd like to see all the wallpapers from iPhone - iPhone 7 remastered in HD, for the iPhone 8.
Score: 2 Votes (Like | Disagree)

Or people who want a day off but need to have a personal disaster happen to get one approved. "Honest, boss, I was on my way to work when Godzilla swallowed my car! Yes, with me in it! Look what's behind me! Big Lizard gut! Depending on his digestive tract I may not be in tomorrow either. "

I'd use it to take a picture of rooms in my house right within five minutes after they're cleaned and tidied. Then in subsequent video calls, I can show myself standing in a tidy virtual version of my house and not the reality of the chaos kids and pets can bring ten minutes after the house has been cleaned. Really, five minutes of perfection is all I can ever get. If I can preserve that five minutes in virtual reality, the iPhone 8 will have justified its stratospheric price.

Initially, I had zero interest in the new iPhone. But as more information is leaked, I have a feeling I'll be hyped up on caffeine frantically pawing at the screen on preorder night, regardless of the state of my budget at the time.
Score: 2 Votes (Like | Disagree)

This is what I expect.

I don't really think it'll be called the 8. Look at the iPad lineup... Mac lineup, etc.

But the 7, as itself, or with a 7S variant is going to stick around. Apple has LOTS of manufacturing in place for it. They will continue to milk the form-factor, ID, and chassis.

It TOTALLY wouldn't surprise me if the 8/pro totally vanishes and only get the typical 7S, I would LOL my ass off.

There's no way that we're only getting a 7S. The 7 is pretty much the same design as the 6/6S (minus a few changes of course).

The design, screen, cameras etc of this phone are all different.

It's going to have a new name. There might be a 7S AND iPhone Pro/2017/"iPhone", but definitely not just a 7S. Unless they call it a 7S, but has a different design.
Score: 1 Votes (Like | Disagree)

Thursday January 27, 2022 11:33 am PST by Juli Clover
With the iOS 15.4 update that was introduced today, Apple has added support for Emoji 14, introducing a selection of new emoji like melting face, biting lip, heart hands, and more. There are 37 new emoji and 75 skin tone additions in Emoji 14, resulting in a total of 112 characters. New faces include melting face, saluting face, face with open eyes and hand over mouth, face with peeking eye, ...
Read Full Article • 66 comments