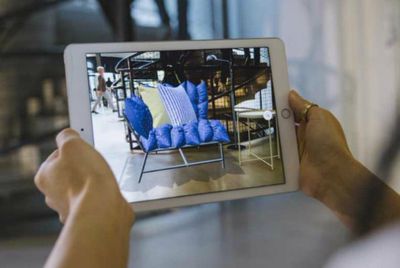 Image via Digital.di
When it launches, the app will let customers choose which IKEA product they want and then use an iPhone or iPad powered by ARKit to see how the IKEA furniture looks in their own home before it's purchased. IKEA has been doing this for years now, including an early version which required users to scan pages of an IKEA catalogue to view AR furniture, but the company said that Apple's platform will greatly increase the consistency and quality of the experience.

Valdsgaard said that the app will support between 500 and 600 IKEA products at launch with more being added afterwards. The augmented reality experience will even directly play into the development and launch of new products, as Valdsgaard explained that the company plans to first debut new pieces of furniture in the app to give customers a taste of what's coming.

"This will be the first augmented reality app that allows you to make reliable buying decisions," said Michael Valdsgaard, digital transformation manager at Inter Ikea Systems, the company that owns the brand Ikea.

Going forward, it will play a key role in new product lines. "When we launch new products, they will be first in the AR app."

Selling furniture directly within the app is a possibility as well, but isn't the company's focus for the first iteration of the software. Valdsgaard said, "Ideally, you could put a sofa in your home with the help of the app, and then with one click add it in the shopping cart on the site. But we have a tight deadline."

Several teams are working on the technology behind the augmented reality app, including one "innovation team" of 150 people located in Älmhult, Sweden -- where the first IKEA opened -- as well as a twenty-person team specifically responsible for the 3D modeling of furniture. The ARKit-powered IKEA app is expected to launch this fall, following the iOS 11 update.

SteveJobs2.0
Practical implementation such as this will demonstrate the true possibilities to the masses far more than Snapchat. Then again, I forget that we are living in the year 2017 AK (anno Kardashianso).
Score: 9 Votes (Like | Disagree)

jrmckins
Who will be the first to photoshop unassembled furniture into that photo?
Score: 5 Votes (Like | Disagree)

Who will be the first to photoshop unassembled furniture into that photo?

Ugh me I guess

Quu
This is game changing. Being able to see how things will look when I'm browsing would open up a whole new way to shop for furniture.
Score: 4 Votes (Like | Disagree)

dannys1
This for me is the killer application of VR for people who aren't interested in gaming.

The only downside I see is you'd need the empty space in the room to see how it'd look. Eg you can't see how a new sofa will look whilst your old one is still there (unless Apple is working on recognising objects in the room with ML and attempting to replace them/covee them with AR, it might need dual depth lenses)