Saturday May 6, 2017 3:07 pm PDT by Joe Rossignol
Apple's rumored "iPhone 8" with an OLED display and wireless charging will continue to have Touch ID, but there is a "high chance" it will be on the back of the smartphone, says Hong Kong-based equity research firm CLSA. 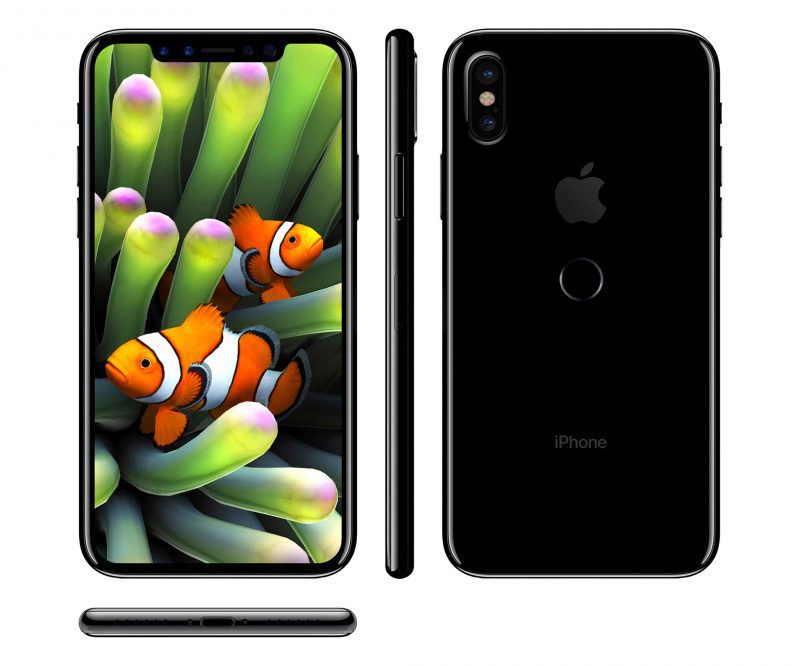 An excerpt from a research note distributed this week by CLSA analysts Sebastian Hou and Brian Chen:

iPhone to ditch fingerprint sensor? We don’t think so.
Both Samsung and Apple tried to enable in-display fingerprint sensing on full-screen OLED phones in 2017, but their optical tech seems immature and the major iPhone 8 bottleneck. Some thus speculate the fingerprint sensor will be removed and replaced by 3D sensing. Our latest supply chain checks indicate the iPhone 8 will still have the sensor given security, user-friendliness, and a need for payments infrastructure, but there is a high chance it will be on the back like Samsung's Galaxy S8.

CLSA created a diagram showing Touch ID placed slightly below the Apple logo on the back of the iPhone.

Samsung included a fingerprint sensor on the back of the Galaxy S8, but some reviews found it to be awkwardly positioned next to the camera. Apple placing Touch ID lower down could make it easier to reach. 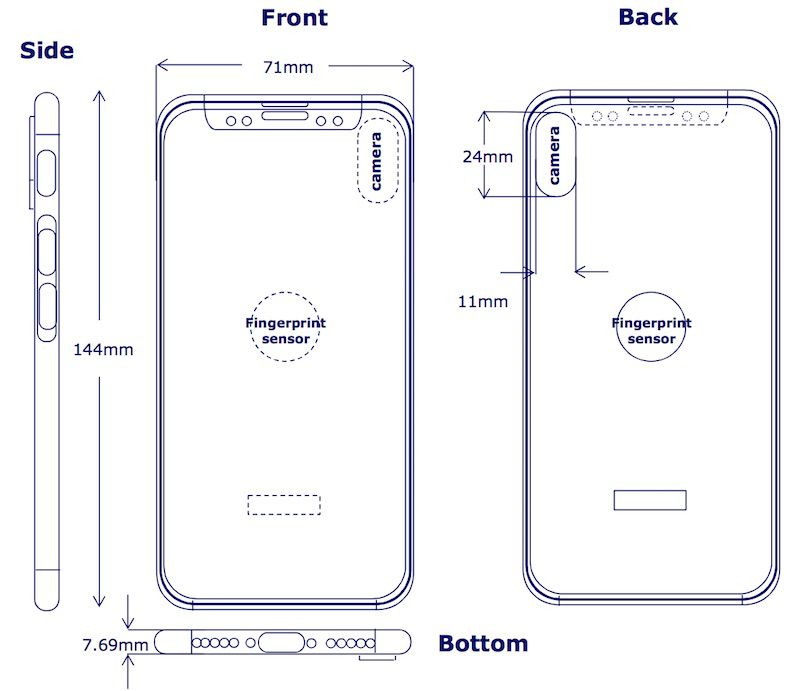 The diagram also shows a vertically-aligned dual-lens camera, a widely rumored iPhone 8 feature seen in previous renders. There also appear to be additional modules next to the front-facing camera, likely for rumored 3D sensing and facial recognition functionality. Other features shown are identical to the iPhone 7.

Touch ID on the back of the iPhone 8 appears to be a fallback solution given Apple's struggles to integrate the fingerprint sensor underneath the smartphone's display effectively enough for mass production. Leaked renders suggest Apple has explored a rear Touch ID sensor on at least one iPhone 8 prototype.

Other manufacturing challenges may push iPhone 8 production behind schedule by at least one or two months, possibly delaying shipments until October or November. Nevertheless, most analysts still think Apple will announce the iPhone 8 in September alongside the so-called iPhone 7s and iPhone 7s Plus.

While some Apple fans will quip that "this same rumor surfaces every year," oft-reliable analyst Ming-Chi Kuo of KGI Securities implied this year's shortage could be much more "severe" than in previous years.

britabroad
From a practical standpoint, touch ID on the back just doesn't work. For one, you won't be able to unlock the phone while it's sitting on your desk, which immediately takes away 50% of your unlock options. Also, a case would have to have a cutout on the rear to accommodate, adding to the phone's vulnerability. Then there's the issue with car mounts - I often unlock while it's clipped into its dash mount to access the maps. (While stationary, of course). All seems like a step back.
Rating: 60 Votes

Loge
Putting the Touch ID on the back just to get an elongated screen with a ridiculous aspect ratio makes no sense whatsoever.
Rating: 33 Votes

bluespark
Well, look at the bright side. If the Touch ID sensor is on the back, then at least we won't have to worry about an iPhone shortage....
Rating: 32 Votes

AJ5790
Last week rumors persosted that it would be in the screen. This week it's different. No one knows. I keep telling myself to just ignore all this... it's not working.
Rating: 24 Votes

Quu
I really don't like the idea of it on the back. Feels like an admission of failure on their part if they do that.
Rating: 22 Votes

WRChris
This years iPhone is the best iPhone since iPhone, but Touch ID is around back so next year we can upgrade people to a phone with Touch ID on the front.

Is it just me or do small bezels look equally as awful as "big" bezels? Top and bottom bezels look stupid with no side bezels as well. I would like to see small bezels all the way around the screen(or completely bezeless), I think it would look much more uniform.
Rating: 18 Votes

Applebot1
Epic fail if true. However just don't see it myself.
Rating: 17 Votes

Mlrollin91
I will not buy it. I've had every single generation iPhone since the iPhone 3G. This would be my 10th iPhone. If it's on the back, it's worthless to me.
Rating: 17 Votes

otternonsense
You're all being cute, acting so surprised. I also yearn to see Apple's design & engineering take its time until they get a front TouchID right rather than slap together another parity product (like last year's iPhone 6SS) just so they stick to the now-mandatory annual September announcement to pander to Wall Street.

That's what Jobs would do. Obsess, get the product right, and only then round up an event.

WTF do you expect from Cook? Like we haven't all been watching the same clockwork streak of lethargic, self-congratulatory events and slow buildup of a nonsensical product portfolio for the past 5 years. The promise of a mythical "pipeline" delivered us three iPhone 6's, three iPhone 5's (oops SE), the entire Mac line in tatters, an iPad that still won't outgrow its oversized-iPhone infancy, an "AI" that came first to market and its only evolution was the icon art. A watch and a TV that are still "getting there". All of those powered by the buggiest OSX and iOS releases in recent memory.

What do you expect? Mold-breaking designs? Surprises? One-more-things? Do you think Cook cares about any of that? His directives are clearly margin building, service growth and reputation management. I personally don't expect anything cooler, exciting or more innovative than a fourth revision of the iPhone 6. And mind you, it will still sell like crazy.
Rating: 14 Votes