Monday January 9, 2017 11:00 am PST by Joe Rossignol
Ahead of the annual North American International Auto Show in Detroit, which opens to the public on Saturday, a number of automakers have debuted new CarPlay-supported vehicles, including models with first-time compatibility from Audi, Honda, and General Motors brands Chevrolet and GMC. 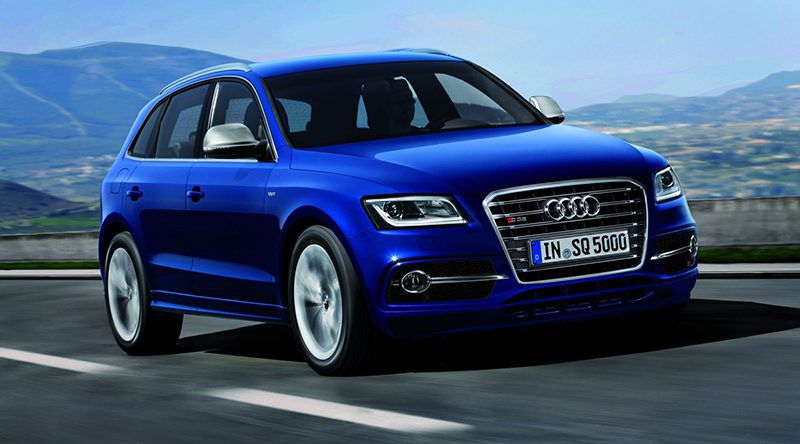 Audi today announced the 2018 SQ5 crossover supports both CarPlay and Android Auto, a first for the SQ5, while the Audi A5 and S5 Cabriolet with CarPlay support are also making their North American debuts at the show. The latter two models were first announced alongside the Los Angeles Auto Show in November.

Other first-time CarPlay vehicles debuting in Detroit this week include the 2018 Chevrolet Traverse, 2018 Honda Odyssey, and 2018 GMC Terrain Denali. The new 2018 Ford F-150 and 2018 Volvo V90 both support CarPlay as well, but previous model years of these vehicles were compatible as well.

The new 5 Series by BMW, the only automaker to offer wireless CarPlay in new vehicles, will be on display. Last week, Alpine announced the first aftermarket CarPlay receiver, model number iLX-107, that will be available in February for a suggested price of $900. It features a 7-inch capacitive touchscreen.

While the 2017 Maxima supports CarPlay, Nissan confirmed to us that the 2017 Rogue Sport is not compatible with Apple's software at this time. The 2018 Camry and 2018 Lexus LS debuting at the show are also incompatible, as Toyota and its luxury brand Lexus have chosen competing platforms over CarPlay.

CarPlay is available in over 200 vehicle models worldwide, providing hands-free or eyes-free access to common iPhone apps such as Maps, Messages, Music, Phone, and Podcasts, and select third-party apps such as Spotify. Apple maintains a CarPlay vehicles list on its website, although it is not always instantly up to date.

Once again, I am currently driving in a 2017 BMW M240i with wireless Carplay. Further, CarPlay currently sucks. That is all.

I don't know what you're comparing it to, but the CarPlay in my 2017 Escape is (while not perfect) better than any interface I've ever used in a car. There's lots of room for improvement, sure, but I'll take it over any proprietary system any day of the week.
Rating: 9 Votes

mwinterr
Once again, I am currently driving in a 2017 BMW M240i with wireless Carplay. Further, CarPlay currently sucks. That is all.
Rating: 7 Votes


Sounds like someone that hasn't really used it. I use it twice daily and love it...especially when I'm travelling and am in a rental yet keep the same familiar interface.
Rating: 3 Votes

philfry
I don't understand the dislike for CarPlay. I have it in my Civic EX-T and I enjoy using it.
Rating: 3 Votes

calzon65
Three days I go I received delivery of my new 2017 BMW 430xi. One of my motivations to purchase the car was because of BMW’s recent offering of Apple CarPlay, but after playing with BMW’s Bluetooth integration/software and CarPlay, I am very disappointed with CarPlay.

When I purchased the car, I had to decide at that time to purchase CarPlay because I was told the option could not be added after delivery. The option was only about $350 so I opted to purchase CarPlay because I love my iPhone and wanted to have what I assumed was the best possible iPhone integration. I owned a BMW 530xi prior to this BMW which did not have CarPlay and had only limited Bluetooth integration (e.g., only hands free calling and contact synchronization). Since I didn't have any other type of integration with my iPhone on my previous BMW, I was looking for a change.

As I mentioned above the look and feel of the latest BMW software has nice color tones and a consistent look and feel throughout with excellent integration/coordination to the physical buttons on the center console (i.e., Menu, Navigation, Communication, Media, etc.) that surround their iDrive wheel. I would prefer a touchscreen to the mechanical iDrive wheel, but I admit it’s not that bad and I’m used to it from my previous BMW.

When I switch from one of the BMW screens to the CarPlay screen, the look and feel of CarPlay really jumps out as horrible in my opinion. The quality of the icons, the color scheme, the shading (or lack thereof) looks like something created by a 5-year-old. I realize Apple wants and probably needs to create a standard look & feel for CarPlay across all makes/models of cars, but when you jump into the CarPlay screen it’s a shock. This is probably more prevalent from car manufacturers that have spent many years and significant resources perfecting their Bluetooth device integration and have mature/refined software.

I will add that CarPlay does have messaging integration, BMW does not, and it appears CarPlay might have integration to other applications not provided by BMW. I have a feeling the Germans probably draw the line at messaging integration because they probably want us to concentrate on driving (a good thing) or maybe Apple refuses to allow third-party integration with their messaging application. I will add that CarPlay does not let you mess around with messaging while driving, so I don’t want to imply that Apple’s CarPlay promotes unsafe driving, it does not.

For example, the BMW mapping system automatically changes from a “day mode” to a “night mode” when appropriate. That means at night the BMW maps go into a very dark back ground with streets colored (illuminated) versus a light (or white) background and dark lines for streets during the day. The CarPlay maps remain in a kind of “day mode” (e.g., white background with dark lines for streets) even at night. So, you have this massive white light shining in your eyes and illuminating the whole cabin that screws with your night vision (yea yea yea I know, what about oncoming headlights, street lights, etc. effecting night vision). My other major complaint is that the CarPlay maps only use half of the large BMW display compared to the BMW maps that use the whole display. I could go on about the CarPlay mapping system but I’m not going to develop a side-by-side comparison, I will say that the actual map quality of the BMW maps is far more detailed than the CarPlay (iPhone) maps, and the Apple CarPlay mapping solution is not even in the same league as the BMW navigation system.

Starflyer
I had the pleasure of using CarPlay in a vehicle I rented a few months ago and I loved it. So much so that my next vehicle purchase will have to include it. (looking at you Nissan/Infiniti)
Rating: 2 Votes

AngerDanger
But they'll still need to release a jailbreak before you can be truly productive with CarPlay:

bytethese
Sad to say, but my next car lease/purchase will be based on availability of Carplay. I have an Acura now so it puzzles me that Honda cars have it, yet Acura does not. I'm now seriously looking at the Ford Explorer, possibly Honda Pilot if it will suit my needs. :)
Rating: 2 Votes

Lol they have more serious problems to get out of the way first
Rating: 2 Votes