Apple today added a banner to its United States website, iTunes Store, and App Store asking customers to provide donations to individuals affected by the recent devastation from Hurricane Matthew. Like its usual relief efforts, all donations collected will go to the American Red Cross. 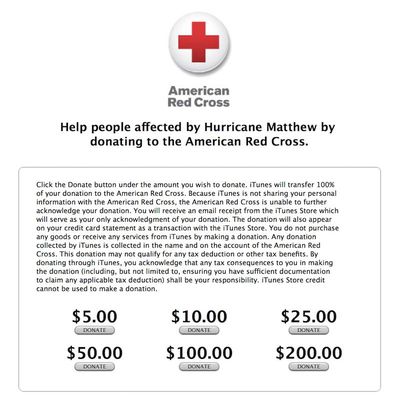 Hurricane Matthew made landfall late last week, hitting the southeast coast of the United States and going on to ravage states like Florida, Georgia, South Carolina, and North Carolina. As of yesterday, more than 2 million businesses and homes were without power, and over 3,000 people have been placed in safety shelters.

Our thoughts are with all those affected by #HurricaneMatthew. Support relief efforts by donating to @RedCross at https://t.co/2b9MLALy4L — Tim Cook (@tim_cook) October 10, 2016

Following natural disasters, Apple normally puts out a call for disaster relief across its various storefronts. In the past, Apple collected Red Cross relief funds for the August floodings in Louisiana, the 2016 fires in Alberta, the 2015 Nepal earthquake, the refugee and migration crisis in the Mediterranean sea, the 2013 Philippines typhoon, and more.
Tags: App Store, iTunes, Red Cross
Related Forum: Mac Apps
[ 52 comments ]

stevet
Except, your donations will not go directly towards the disaster, they go into a fund. And not all the money that comes in goes the that relief effort.
Score: 20 Votes (Like | Disagree)

Crash0veride
Please donate to one of these instead for more meaningful impact: 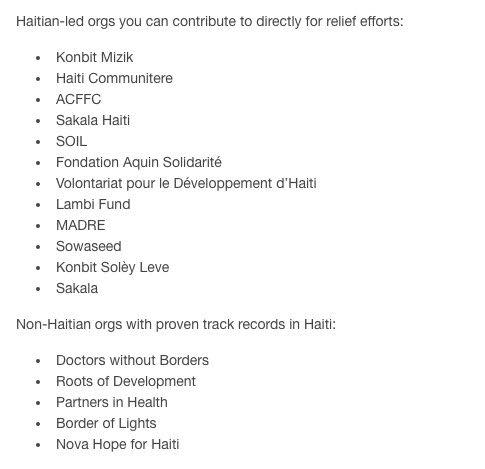 If you just want to feel good about yourself please donate to the American Red Cross
Score: 16 Votes (Like | Disagree)

Please donate to one of these instead for more meaningful impact:

Exactly! The American Red Cross is a terrible place to give your money. Don't give your donation to a wasteful middle man.

Except, your donations will not go directly towards the disaster, they go into a fund. And not all the money that comes in goes the that relief effort.

Plus you don't get a receipt, Apple gets that for tax purposes. Sneaky
Score: 7 Votes (Like | Disagree)

Apple could also help with their multi billion dollar fortune.

And you could sell your house and give the proceeds to Haiti. Or are you just one of those types who likes to tell everyone else what they should do with their money and wags their finger when you think they have too much of it?
Score: 6 Votes (Like | Disagree)

Except, your donations will not go directly towards the disaster, they go into a fund. And not all the money that comes in goes the that relief effort.

Unfortunately, you are correct. Many of the funds collected for Haiti in the past (Red Cross and "Hope for Haiti") never reached Haitians or built the houses they supposed to (I think maybe 4 houses were built).
Score: 6 Votes (Like | Disagree)
Read All Comments