Less than one month before Apple is expected to announce the iPhone 7 and iPhone 7 Plus, Chinese repair shop GeekBar has shared the first photo of what appears to be the next-generation A10 chip destined for the smartphones on Weibo. The number of pins appears to be consistent with the A9 chip's 64-bit LPDDR4 interface.

While the photo could easily be faked, the chipset is labeled with a 1628 date code, corresponding with mid-July production. Additionally, GeekBar has accurately leaked components for unreleased Apple products in the past, including the iPhone 6s display assembly and iPhone 6 schematics showing a 128GB storage option. 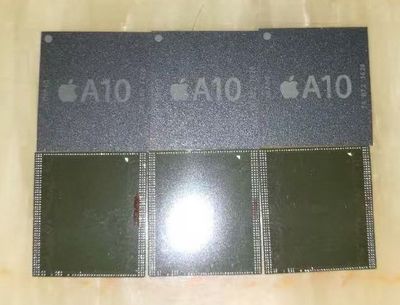 What is pictured here is not the complete A10 chip and may be the RAM layer that is stacked on top of the A10 wafer as one system-on-a-chip, rather than the processor itself. Apple A-series chips are typically labeled on all four edges, suggesting this chipset is in a mid-production state.

Last year, TSMC-built A9 chips were found to outperform Samsung-built A9 chips in early iPhone 6s battery benchmarks, but subsequent tests showed less significant impacts that Apple later said amounted to only a 2-3% difference in "real world" battery life. Samsung is not expected to be an A10 chip supplier.

dannyyankou
I never understood the value of seeing what the chip looks like. It looks the same as all the other ones except there's a 10 instead of 9.
Score: 31 Votes (Like | Disagree)

sniffies
OMG, it's so gorgeous and sexy, makes me drool. Can't wait for iPhone 7.
Score: 13 Votes (Like | Disagree)

So basically we've seen everything inside and out. I guess the packaging is next?

The only thing left for the keynote day is Tim's faux-excited excitement of how excited he is for the exciting things ahead.
Score: 11 Votes (Like | Disagree)

I never understood the value of seeing what the chip looks like. It looks the same as all the other ones except there's a 10 instead of 9.

I agree. when they start offering the chips in gold, rose gold, etc, then I'll be a little more excited.
Score: 7 Votes (Like | Disagree)

CarpalMac
LOOK AT THE BEZEL ON THAT THING!!!