The news that Apple dual sourced its A9 chips for the iPhone 6s and iPhone 6s Plus has been a point of discussion over the past few weeks, especially when new battery tests on the phones pointed towards the TSMC chips outperforming those made by Samsung. Following the news, several YouTubers have begun creating videos to compare the dual sourced chips in both battery-straining tests and basic real-world scenarios.

In the first video, Austin Evans compared identical models of the iPhone 6s -- one with the Samsung chip and one with the TSMC chip -- and calibrated their screens so they had the exact same brightness. After running the GeekBench 3 battery test until they both ran down to 50 percent battery life, Evans discovered that the TSMC iPhone 6s lasted fifty minutes longer than the Samsung version, "resulting in a nearly 1.5 times difference in battery life." Thermal imaging also showed the Samsung device running hotter than the TSMC version.

Evans also ran a lighter battery test, playing the same hour-long YouTube video on each device to see how a more day-to-day scenario would affect each chip. In the end, he saw only a one percentage point difference in battery drain, noting that while heavy-use cases could see the TSMC chips come out on top, highlighting the differences between benchmarks and real-world usage.


The next video is from Jonathan Morrison, who compared each chip by running a 30-minute timelapse with all the same settings and brightness running on each device. After the test, the Samsung iPhone 6s was down to 84 percent battery, while the TSMC version came in on top with 89 percent remaining. Morrison continued testing the battery strength of each chip with a ten-minute 4k video test, exporting the video file in iMovie, and finishing off by running GeekBench 3. At the end of the full set of tests, the iPhone with the Samsung chip was at 55 percent battery while the TSMC device was at 62 percent.
The takeaway from Morrison and Evans' videos today seems to be that while intense cases like synthetic Geekbench tests designed to push devices to their limits revealed as high as a 22% difference in battery life between devices using the two chips, real-world impacts may be much smaller depending on the mix of activities. In these specific usage patterns shown above, battery life differences between the two processors ranged from 6% to 11%.
Tags: Samsung, TSMC, A9
Related Forum: iPhone
[ 302 comments ]

randyj
Maybe the VW programmers helped TSMC with the code so it would report better numbers when it was being benchmarked...
Score: 43 Votes (Like | Disagree)

mattopotamus
Am I the only one that thinks the difference between 62% and 55% is pretty big? There are plenty of heavy users out there.
Score: 22 Votes (Like | Disagree)

Markoth
I prefer the one with the smily face, personally.
Score: 19 Votes (Like | Disagree)

And this could all be due to slight variances in manufacturing between the two phones outside of the chips. A true, valid, and scientific test would need a larger sample size.

In the end, I just don't understand the stress people are getting into over this minor issue. It is definitely not worthy of a "gate" label.

It's basically a sport these days to feel victimized by corporations. This just gives people an excuse to. You'd think people would have better things to do, but I suppose not.
Score: 15 Votes (Like | Disagree)

Just thought I'd point this out. In the last article showing the parity between battery life tests, one of the phones had an Active SIM and the other phone had No SIM and did not have Airplane mode on, which made it drain more than it normally would have. 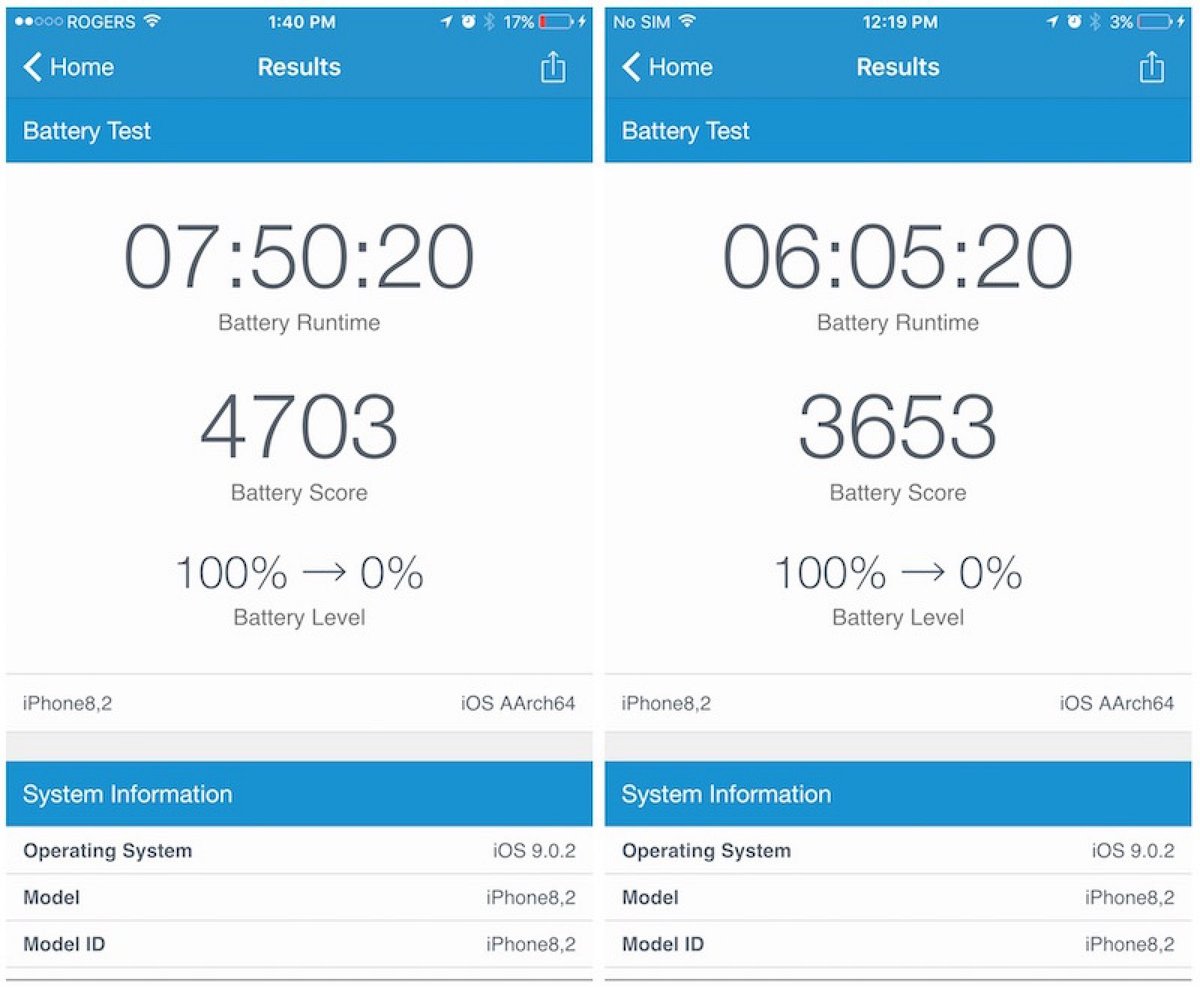 Why would the one with no sim drain faster? It's not constantly connecting to the cell towers because it doesn't have a SIM, right?
Score: 15 Votes (Like | Disagree)

OldSchoolMacGuy
Real life use is negligible. Just as I said previously. Nothing but click bait to get some people heated.
Score: 13 Votes (Like | Disagree)
Read All Comments