The success of Pokemon Go has had many real-world ramifications recently, including cautionary tales of car accidents, thieves using the game to stage robberies, and Nintendo's shares jumping 25%, or $7.5 billion, in days. The new augmented reality game is also driving business to local restaurants and bars, according to a new report from Bloomberg. 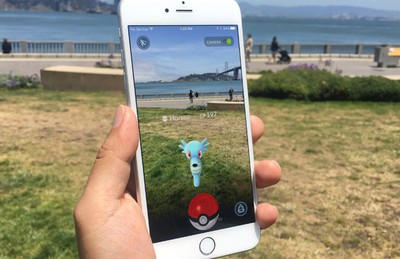 Food and drink sales spiked by about 30 percent compared to a typical weekend, according to [L'Inizio's Pizzar Bar] manager Sean Benedetti. It was part luck—the game chooses which public locations to imbue with special significance in its virtual world—but there was also savvy strategy. Benedetti, 29, spent about $10 on "Lure Modules," an in-game purchase that attracts Pokémon to a specified location. Players soon picked up on the fact that L’inizio’s was well worth visiting. “People are coming out of the woodwork because of this game,” he said.

Pacific Standard co-owner Ryan Kahl told Bloomberg that while the game has increased foot traffic in his Brooklyn-based bar, he hasn't yet seen the traffic translate into business. "We had one guy run to the back because he had a rare Pokemon," he said. "It's been a little weird." However, Kahl said he had not tried to see if using "Lure Modules" would make a difference, noting that he's hoping it gets hot enough that adventuring players need to refuel.

Some businesses have taken to hanging up signs alerting players how it does or does not support the game. Pacific Standard, for example, hung up a sign saying "Pokemon are for paying customers ONLY!", although Kahl says it was a joke. A Dairy Queen in Texas also put up a similar sign. Other businesses, however, have alerted customers to in-store discounts for meeting certain parameters within a game, like using a "Lure Module" or being a part of one of the game's teams.

Other locations, like Internet Archive's Washington office, have found themselves unable to financially take advantage of the attention. Many of the game's gyms are churches or other public establishments, and former churches and establishments can still be crowned as gyms. The group eventually put up a sign letting players know that they were welcome to battle at the gym, but to not disturb their staff, according to Bloomberg. Designer Boon Sheridan, who lives in a former church, has seen his home transformed into a gym.

Living in an old church means many things. Today it means my house is a Pokémon Go gym. This should be fascinating. — Boon Sheridan (@boonerang) July 9, 2016

Nintendo, Niantic and The Pokemon Company plan to make improvements to Pokemon Go, including the ability to trade Pokemon with other players. While business owners indicated to Bloomberg that they'd be interested in working with the companies to promote their businesses through the game, it's unclear if Nintendo is open to that idea.

Pokemon Go is available in the App Store for free [Direct Link] for users in the United States, Australia and New Zealand. The game is expected to roll out to the United Kingdom and other countries in the near future after server issues are sorted out.

Am I the only one tired of hearing about this stupid game? I feel like this should be on Touch Arcade or something.

Yeah why should we care about the biggest game smash perhaps in the history of iOS devices and the worldwide effects on company value, commerce, and interest in entirely new ways to play something when we can just talk about camera cutouts for a phone that is months away?!
Score: 15 Votes (Like | Disagree)

PowerBook-G5
Am I the only one tired of hearing about this stupid game? I feel like this should be on Touch Arcade or something.
Score: 9 Votes (Like | Disagree)

Seems fine to me, despite being largely ignorant of Pokemon and no desire to learn more.
Score: 7 Votes (Like | Disagree)

Seems fine to me, despite being largely ignorant of Pokemon and no desire to learn more.

You forgot "people complaining about new thing because it s new and different: check"
Score: 6 Votes (Like | Disagree)

840quadra
Because I was curious, gave it a try. Pales in comparison to Ingress, which helps you learn interesting landmarks in your area, and just provides much, much, more depth. But, getting people to go outside, is a great feature of both!
Score: 5 Votes (Like | Disagree)

RadioGaGa1984
I literally laughed out loud

Yeah why should we care about the biggest game smash perhaps in the history of iOS devices and the worldwide effects on company value, commerce, and interest in entirely new ways to play something when we can just talk about camera cutouts for a phone that is months away?!