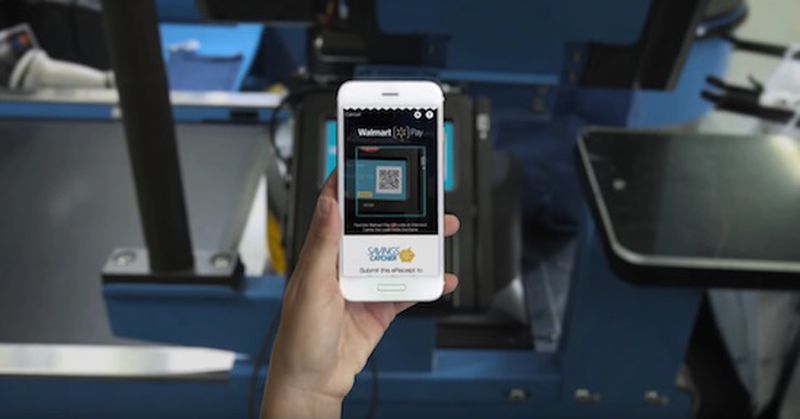 Walmart Pay is built into the Walmart app [Direct Link] for iOS and Android and works at any checkout lane with any major credit, debit, pre-paid, or Walmart gift card.

The payments solution is based upon a QR code checkout process that involves opening the Walmart app, selecting Walmart Pay, activating the camera, scanning the code displayed at the register, and waiting for the cashier to finish bagging your items. An electronic receipt is automatically sent to the app.


Walmart Pay's widespread adoption at some 1,500 stores in fifteen more states, following statewide launches in Arkansas and Texas last month, further suggests that Walmart will not be adopting Apple Pay for at least the foreseeable future. Walmart Pay's nationwide rollout is expected to be completed in 2016.

The word in late 2015 from Walmart senior vice president of services Daniel Eckert was that Walmart Pay allows "for integration of other mobile wallets in the future," providing at least some hope that the retailer may eventually accept rival payment services such as Apple Pay, Android Pay, and Samsung Pay at its stores.

Walmart is among a handful of retailers that have refused to support Apple Pay since its American launch in October 2014. The retailer was originally committed to the Merchant Customer Exchange (MCX) consortium and its now indefinitely postponed payments service CurrentC before launching Walmart Pay.

Walmart's resistance to Apple Pay persists even as other former holdouts such as Best Buy and Rite Aid have reversed course and begun accepting the iPhone-based payments service at their U.S. stores. Walmart rival Target, meanwhile, is developing a QR code-based mobile wallet solution of its own.

The Walmart app [Direct Link] is free on the App Store for iPhone and Apple Watch.

TurboPGT!
These are just examples of projects that were already green-lighted and budgeted ahead of Apple Pay's announcement.

They all know that its just a matter of time. Walmart was hoping to cut out VISA and everyone else and take back their 3%, but its not going to happen.

Target should be ashamed. They've already suffered a breach that compromised cards for many customers. An appropriate response to that should have been to run in the direction of Apple Pay as fast as they could.
[doublepost=1466690771][/doublepost]

I've been to a Walmart, you wouldn't want to be flashing an expensive phone around there anyway.

macintologist
Does anyone use this turd?
Rating: 17 Votes

Davelfc
I've been to a Walmart, you wouldn't want to be flashing an expensive phone around there anyway.
Rating: 17 Votes

So much faster than Apple Pay. Really looking forward to trying it.

So much faster than Apple Pay. Really looking forward to trying it.

John Mcgregor
So much faster than Apple Pay. Really looking forward to trying it.
Rating: 9 Votes

Loge
Reminds me of the time when certain stores would only take their own charge cards and not accept standard credit cards.
Rating: 9 Votes

mantan
I know the knee jerk MR reaction is to bash Walmart.

But I get what Walmart and Target are doing. Tracking consumer data is really important to them. They are going to pursue alternative electronic payments that try to let them do this while still being secure...the market will ultimately decide what's best.

Other than Starbucks, consumers have been hesitant to embrace the idea of loading an app with a QR code as a regular method of payment.
Rating: 8 Votes