The Merchant Consortium Exchange, aka MCX, today told beta testers that it is suspending its CurrentC beta test on June 28 and postponing all further releases of the payments platform.

The news was delivered in an email sent to all Columbus, Ohio beta testers and shared by The Consumerist. On June 28, when the beta test ends, MCX plans to disable all active accounts and end customer access. 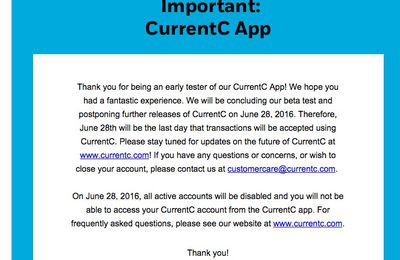 MCX has also announced the news on the CurrentC website, complete with an FAQ for customers that says MCX has "not yet determined the future timing of CurrentC" but will provide further details in the future addressing whether or not the project will be continuing.

Last month, MCX CEO Brian Mooney announced plans to postpone the rollout of the CurrentC payments platform following feedback from the beta test. At the same time, he said MCX would downscale and lay off 30 employees as part of an effort to transition from a consumer-facing product to building business partnerships with financial institutions.

MCX, a consortium of merchants like Walmart, Best Buy, CVS, Rite Aid, Target, Lowe's, and more, has been working on implementing the CurrentC platform since 2012. It was once believed CurrentC could be a major Apple Pay competitor given the number of retailers backing the effort, but interest appears to have fizzled out.

CurrentC required customers to open an app and scan a QR code to make a payment, a convoluted system described as offering minimal benefit to consumers. Its implementation was not as simple as Apple Pay or other payment options from Google and Samsung, which may explain why development did not move beyond a beta testing phase.

Many MCX members now accept Apple Pay despite some early resistance due to exclusivity agreements, and Walmart, one of the main CurrentC backers, has developed its own payments service and Apple Pay competitor called Walmart Pay.

ZacNicholson
Everyone knew it was a failure from the start
Score: 46 Votes (Like | Disagree)

OldSchoolMacGuy
Really sucks for the one guy that used it.
Score: 33 Votes (Like | Disagree)

ActionableMango
John Gruber did a wonderful translation of the corporate doublespeak into plain English:
http://daringfireball.net/2016/05/translation_mcx

Utilizing unique feedback from the marketplace and our Columbus pilot, MCX has made a decision to concentrate more heavily in the immediate term on other aspects of our business including working with financial institutions, like our partnership with Chase, to enable and scale mobile payment solutions.

[INDENT]CurrentC is a complete and utter failure.

As part of this transition, MCX will postpone a nationwide rollout of its CurrentC application.

Carmenia83
I can't believe this far along and we're still fighting over payment systems. Even places that DO accept Apple Pay are a pain in the ass half the time. A couple weeks ago at a Dunkin Donuts I used my watch to pay for my purchase and the register spit out a receipt indicating it was paid for. The cashier refused to give me the receipt and immediately called a supervisor to the register who told me I had to use a different payment method because they don't accept Apple Pay "because it doesn't work." I showed them on my watch they the transaction went through and pointed out that the receipt said it was paid. The supervisor continued to try to tell me I hadn't paid for anything and she got on the phone to call the stores owner. I opened the Chase app on my phone and showed her when she got off the phone that the transaction was already pending on my credit card. She still insisted that they didn't get paid but gave me my coffee anyway and informed me that they don't accept Apple Pay and told me to have a nice day. I threw it in the trash and told her I'll get one somewhere else with the line of people behind me watching.
Score: 25 Votes (Like | Disagree)

hlevolve
Good riddance... Now hopefully walmart pay will fail and these retailers will move to apple pay and the other NFC payment options like they should have done in the first place.
Score: 18 Votes (Like | Disagree)
Read All Comments