The idea behind Breathe is to help Apple Watch owners better manage everyday stress, and works by prompting users to take a short time out to focus their attention on the simple act of breathing.

By default, Breathe serves up a one-minute session which guides the user through seven breaths. The duration can be extended to up to five minutes by rotating the Digital Crown, while breathing can be slowed to four breaths per minute, or increased to ten per minute. 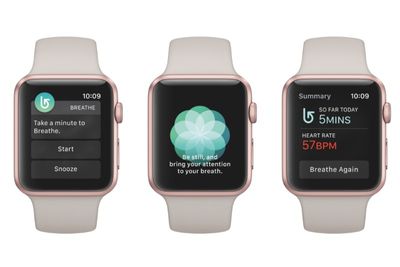 As the session begins, the app asks the user to "Be still, and bring your attention to your breath". A mandala-like series of concentric circles then begin to expand and contract on the watch screen as a visual guide for the user to adjust the rate of their breath.

What's not obvious from demos is that the app also makes use of the Apple Watch's haptic feedback, by initiating a delicate tapping rhythm on the wrist that begins fast and gradually fades at the top of each breath, as a subtle cue to exhale.

The use of haptic feedback also means the user can close their eyes as the session takes place, while the intensity of the feedback can be adjusted in the app settings.

When the session comes to an end, the user's recorded heart-rate during the session is shown, as is the total number of minutes that have been spent using the app that day. An option to retake the session and "Breathe again" also appears on screen.

The default setting for the app is to prompt a session every four hours, but prompts can be snoozed and their frequency can also be changed in the app's settings.

Additionally, a Breathe complication can be added to watch faces, allowing users to start a session with a simple tap whenever they choose.


During the Keynote, Apple did not cite any scientific evidence to back up its claims that bringing attention to the breath can help decrease stress and alleviate anxiety. However, research does exist to support the claim.

Breath-based meditation has been shown to reduce activity in the brain's "default mode network" (DMN), an area implicated in mind-wandering and the sense of self. Increased activity in this "resting state" network is known to be associated with conditions such as depression and anxiety.

Recent neuroimaging studies have also shown that daily meditation alters the functional and structural plasticity of the brain, and can increase cortical thickness in specific brain regions associated with attention-based tasks.

The Breathe app is part of watchOS 3, which will be released as a free upgrade this fall.

This seems like the type of thing a company comes up with when they've run out of ideas for anything new, IMHO.

A company comes up with a new idea because its run out of new ideas? I think commenters go more nutty every year. You can predict to a t the responses every year along the lines of, Apple is doomed, this wouldn't have happened if Steve jobs was around, I won't buy this unless they do xyz and want everyone to know, Apple should stop changing things so quickly, Apple should change things more quickly, its simply hilarious since all the commenters are android trolls or Apple customers who end up buying the product anyway just so they have something to complain about. Gotta love it.
Score: 13 Votes (Like | Disagree)

Oh boy. I love Apple as a tech company. But I am not a big fan of eastern spirituality. This breathe app is a step in the wrong direction imho. Luckily it can be disabled, but I don't like the fact that Apple tries to dump such things on me. Wearing the Apple watch is a personal choice. If the Watch will be associated with this, I'll have to consider wearing my good old Certina instead. It would be much wiser to add this app as an optional downloadable, not a core part of the OS.

Meditation doesn't have to equate with spirituality. Science guys such as Sam Harris, Steven Pinker, Jonathan Haidt, Michael Shermer all recommend meditation practice. One doesn't even have to assume the lotus position. The Buddhist symbol for the human mind is the chattering monkey, which is just great. And there's fascinating research showing the positive benefits of shutting up the monkey mind.
Score: 10 Votes (Like | Disagree)

The on-screen instructions are boring. I suggest you try the app with Prodigy's Breathe. :D
Score: 10 Votes (Like | Disagree)

stiligFox
Man, the more I read this thread, where the heck is all this hate coming from? Just turn the darn thing off if you don't want to use it. It's not hurting anyone?
Score: 7 Votes (Like | Disagree)

I thought it was a gimmick , guess I'll just wait to try it out.

No, deep breathing, mindfulness and the various kinds of meditation are not gimmicks. Lots of technically minded people would benefit from some of this as part of their daily routing to be frank.
Score: 7 Votes (Like | Disagree)
Read All Comments