Apple used its WWDC 2016 keynote on Monday to unveil macOS 'Sierra', the successor to its OS X 10.11 El Capitan operating system for the Mac, promising window tab support across multiple apps, copy and paste between devices, Siri integration, and more.

The announcement of a change in naming convention also means that Apple now has a consistent naming structure across all its software platforms: iOS, macOS, tvOS, and watchOS. 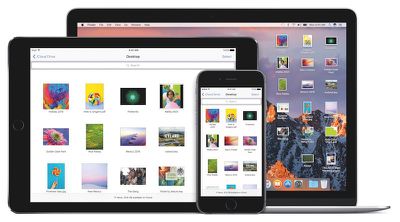 Apart from Siri's introduction to the Mac desktop, Apple focused on a handful of new Continuity-themed features exclusive to macOS Sierra, one being the ability to access files on the desktop and in the Documents folder on any Mac, iOS device, or even a PC.

Sierra will allow users to access these files on an iPhone and iPad via the iCloud Drive app, through iCloud.com, or using the iCloud for Windows app. And if a user logs into a second Mac, their files will be automatically available on the Desktop and in the Documents folder, exactly where they were saved.

Another Continuity feature coming with macOS is 'Universal Clipboard', which enhances the traditional copy and paste functionality by enabling users to automatically copy text, photos, and more from an iPhone or iPad, and instantly paste them on a Mac.

In addition, a new security feature in macOS Sierra called 'Auto Unlock' allows Apple Watch wearers to gain access to their locked Mac simply by walking into its vicinity, whereby they become automatically logged into the desktop.

Apple is also extending the tabs feature in Safari to all apps that support multiple windows, including Maps, Mail, Pages, Numbers, Keynote, and TextEdit, as well as compatible third-party apps.

For example, tabs in Maps will mean users can browse multiple locations without losing their place, while tabs in Pages should allow users to copy and paste between Pages in fullscreen mode, or jump between multiple email drafts in Mail.

Sierra also brings the Picture-in-Picture feature found in iOS 9.3 to the Mac, making it possible to float video from Safari or iTunes in a window on the desktop while working on something else. Video windows will be resizable, draggable, and able to be pinned to the corner of the screen.

Meanwhile, the Photos app is getting a new intelligent Memories feature, which automatically creates curated collections of special occasions like birthdays, weddings, and vacations using people, object, and location recognition.

Bolstered by the new recognition technology, the People feature will automatically group photos into Albums based on who is in them, while Places will display photos on a world map so users can see where they were taken.

Additional features coming with macOS Sierra include: Optimized Storage, which frees up space when a Mac starts getting full by storing infrequently used items in iCloud; an enhanced Messages app, bringing the desktop version in line with all the new features exclusive to iOS 10; and an updated version of Apple Music in iTunes, which is likely to reflect changes to the iOS 10 Music app.

macOS Sierra is available to developers for testing today. Apple says a public beta will be launched in July, while the final public release is coming in the fall.

Dilster3k
Some nifty handy features... But waiting an entire year for this? Bit disappointing.
Score: 24 Votes (Like | Disagree)

definitive
that looked like a very underwhelming update... hope they at least provide native drivers for newer nvidia gpu's.
Score: 22 Votes (Like | Disagree)

VMukhtarov
How about this?
The Apple File System (APFS) is the next-generation file system designed to scale from an Apple Watch to a Mac Pro. APFS is optimized for Flash/SSD storage, and engineered with encryption as a primary feature.
Score: 17 Votes (Like | Disagree)

Free? You buy it together with a Mac computer.
Score: 16 Votes (Like | Disagree)

blaichch
It seems like they're going to release a new file system:

Saturday February 4, 2023 10:05 am PST by Eric Slivka
Online retailer TigerDirect has slashed pricing on the M1 iPad Air in several colors, offering the base 64GB configuration for just $313.99 in Purple and Pink. Note: MacRumors is an affiliate partner with TigerDirect. When you click a link and make a purchase, we may receive a small payment, which helps us keep the site running. That's a savings of 48% compared to Apple's normal $599.00...
Read Full Article • 535 comments

Friday February 3, 2023 1:28 pm PST by Juli Clover
Today is the official launch day for the second-generation HomePod that was introduced in January, and we picked one up to compare it to the original HomePod that Apple discontinued in 2021. Subscribe to the MacRumors YouTube channel for more videos. Design wise, the second-generation HomePod looks a lot like the first-generation model, featuring the same rounded design and acoustic mesh...
Read Full Article • 176 comments