iPhone 7 and the Audiophile Case For Lightning Headphones

According to some rumors, Apple's iPhone 7 and iPhone 7 Plus will not include a headphone jack, requiring headphones to connect to the devices using a Lightning connector.

Last month, MacRumors considered the case for and against Lightning headphones by comparing the audio performance of existing brands at three different price points: the $45 Brightech earphones, the $300 Philips Fidelio M2L headphones, and the $800 Audeze El-8 headphones.

In our tests, all of the Lightning-connected headphones, from the $45 pair to the $800 pair, sounded better than comparable headphones connected to an iPhone using the 3.5mm jack.

Yesterday, The Verge took a closer look at the brand in our highest price bracket, the Audeze El-8, alongside the company's Sine headphones, and argued its own reasons for why adopting Lightning for audio should be considered a welcome and essential advance for serious listeners. 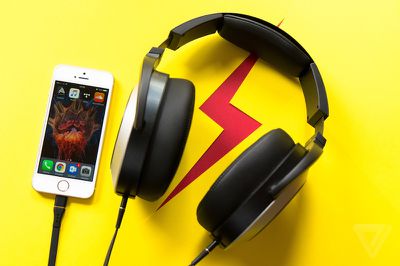 The review makes the general case that Lightning headphones have the potential to hand crucial audio reproduction tasks back to the headphone maker, relegating the iPhone to the role of simple digital source. For high-end listening enthusiasts, this is said to be a potential game-changer, although the impact on an iPhone 7's battery life obviously remains unclear.

In purely sonic terms, The Verge notes how the Audeze audiophile cans sound "dramatically better when exploiting the all-digital connection with their so-called Cipher Lightning cable", which houses its own digital signal processor, digital-to-analog converter (DAC), and headphone amplifier.

The review continues in a breakdown of general arguments for using Lightning for serious listening enjoyment, the first being better hi-fi portability. This is based on the idea that the integrated smartphone DACs and amps which traditional 3.5mm jack headphones rely on are inferior to dedicated external components.

Given that the latter are usually bulky and inconvenient in their own right, if Lightning headphones can integrate these components into the connector cable, the trade-off should be far superior sound quality.

Audeze takes care of that by integrating those components within its Cipher cable. From the outside, the Cipher module looks like an enlarged remote control, but on the inside it performs an almost magical transformation.

The second argument for Lightning is more power: the reviewer notes that the iPhone's integrated circuitry is among the best on the market, but it still lacks the power to drive high-end cans to their full potential.

Maximum volume directly from the iPhone is quite mediocre, pushing the EL-8 to no more than 70 percent of their capacity through the standard 3.5mm jack. Swap in the Cipher cable, however, and the EL-8 transforms into a super powerful set of cans. It's loud even before you hit Apple's warnings about continuous playback at high volumes, and it's straight up bad for your hearing at its max.

The article also highlights the fact that the Audeze iOS app gives exceptional control over headphone frequency response, and saves user settings in the firmware housed in the Cipher cable.

With two customizable presets per headphone, that means you only have to make your adjustments on one iOS device, and then your pair of EL-8 or Sine will carry those preferences with them to the next Lightning-connected device.

I love the granularity of Audeze's EQ adjustments — which span all audio sources, whether your sound is coming from Tidal, YouTube, or the default Music app — as they can be made in 1dB increments across 10 frequencies.

Finally, The Verge argues that the growing trend towards more digital and less analog "make(s) the classic 3.5mm jack redundant" and positions Lightning alongside wireless protocols as the future drivers of audio innovation.

I can get more convenient audio if I drop the wires, or I can get better audio if I go digital via Lightning. With upgradeable firmware and new sensors being built in, headphones are changing in function just as they're changing in connectivity. If you want to buy the headphones of the future, don't cling on to the connector of the past.

Sure, there'll be an adaptation period where adapters will be necessary, but over time Apple's Lightning and the more universal USB-C standard will take over from the 3.5mm connector. LeEco has already started the trend by eschewing the old jack in its latest phones, and others are sure to follow.

The iPhone 7 is expected to be launched in September, when we should find out just what's in store for audio enthusiasts and regular listeners alike. You can read The Verge's original article here, and be sure to catch MacRumors' video, Lightning Headphones: Are They Better or Just an Inconvenience?

Davmeister
Yep. This makes perfect sense for the majority of users, right?

Monkeydude
Talking about audiophile is just ridiculous. 90% of the iPhone users listen to mp3 with the delivered mediocre (at best) Apple earbuds. iTunes does not sell lossless music (and if they did, you couldn't save more than 3 songs on the 16gb devices). So please do not play the "audiophile" card.
p.s. How many people do you know, who own 800$ headphones (and listen to their music from an iPhone with it)
Score: 35 Votes (Like | Disagree)

joeblow7777
Here's a thought; current iPhones have a lightning port AND a headphone jack. Is there any reason why Apple can't keep both but pack bluetooth or lightning earbuds with the phone if that's the standard they want to promote? By all means, advance audio technology, but there's no need to make it an all or nothing transition. Legacy ports and backwards compatibility are almost always welcome features in technology. Best of both worlds.
Score: 25 Votes (Like | Disagree)

Porco
I think this 'case for lightning headphones' is weak, and fundamentally dishonest, because you're essentially making comparisons between DACs/amps, not headphones.

Spend enough money on an external DAC and guess what: it sounds better than the cheaper internal one Apple uses. This is not news people!

But buy integrated lightning headphones and you are lumbered with some proprietary headphones that work only with iOS devices.

Alternatively, buy a lightning DAC with a 3.5mm headphone jack and continue using high quality headphones of your choice. Like you could do already.

There is nothing in the case argued that can't be done NOW with current iOS devices and the lightning port, if you want to (as the examples prove!). The choice of buying a better DAC/amp for the iPhone is a good one to have, whether integrated into the headphones or not. But it isn't an argument for dropping the built-in headphone jack, which is what I find misleading about it.

Removing the option of using the built-in headphone jack would only be for Apple's benefit - not consumers, many of whom are not going to want to spend the increased cost on headphones with integrated DACs that they can only use on one manufacturer's devices - they will buy bargain-basement adapters that sound no better than the iPhone's DAC, only now they will have to carry an adapter or buy superfluous proprietary headphones they never wanted to.

By all means extol the benefits of having the option for external DACs and amps for audiophiles. But don't imply Apple is doing the world in general a favour if it removes the bog-standard 3.5mm headphone jack from its devices and forces what is now a great option into being literally the only way to use wired headphones with a new iPhone.
Score: 24 Votes (Like | Disagree)

jpn
the article is looking for some kind of way Lightning is better than 3.5 for audio.
and it doesn't find any,
Score: 23 Votes (Like | Disagree)

MRxROBOT
USB-C is a welcome step forward from 3.5mm, but the thought of Apple moving to Lightning headphones is ridiculous.
Score: 22 Votes (Like | Disagree)
Read All Comments