'Star Wars: The Force Awakens' Coming to iTunes on April 1

Disney today announced that the newest film in the popular Star Wars saga, Star Wars: The Force Awakens, will be available on iTunes, Disney Movies Anywhere, and other Digital HD sources on Friday, April 1, several days ahead of a planned April 5 Blu-ray and DVD release. 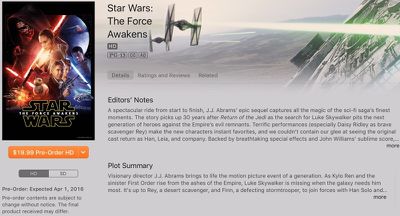 Digital bonus features will vary by retailer, but may include behind-the-scenes interviews and details on the making of the film, the building of the BB-8 droid, deleted scenes, and more. Apple and Disney have not specified which features will be included with the iTunes version of the movie.

- Secrets of The Force Awakens: A Cinematic Journey - For the first time, discover the complete story behind the making of The Force Awakens, revealed through in-depth footage and exclusive interviews with the actors and filmmakers in this feature documentary
- The Story Awakens: The Table Read - Cast members familiar and new reflect on the memorable day they all first came together to read the movie's script
- Building BB-8 - See how the filmmakers brought the newest droid to the screen, creating an instant fan favorite in the Star Wars universe
- Crafting Creatures - Watch movie magic as the filmmakers bring a cast of new creatures to life
- Blueprint of a Battle: The Snow Fight - Go deeper into the epic, climactic lightsaber battle between Rey and Kylo Ren
- John Williams: The Seventh Symphony - The legendary composer shares personal insights of his work on Star Wars and The Force Awakens
- ILM: The Visual Magic of The Force - An insider's look into the remarkable digital artistry of the movie's visual effects.
- Force For Change - Heroes come in all shapes and sizes. See how the Star Wars: Force for Change initiative has united Star Wars fans all over the globe to help others.

carrrrrlos
Would have been an epic May 4th release.
Score: 16 Votes (Like | Disagree)

Lancetx
I'll still wait until April 5th and get the BD/DVD/iTunes HD retail combo package for the same price.
Score: 11 Votes (Like | Disagree)

I want to buy the combo pack (BluRay/DVD/Digital Copy), but the packaging doesn't say if it's the iTunes copy.

I stream my movies. I don't buy DVDs or BD. In fact, I haven't even owned a DVD player for over 10 years. I rent almost all movies I watch, and the ones I buy I get through iTunes.

You have my deepest condolences :p
Score: 3 Votes (Like | Disagree)

Jsameds
Disc based for my favourites, streaming for everything else. Dat's just how I roll.

citi
Wow, that was super fast for a movie as successful as this. Not complaining though. Day one purchase.
Score: 3 Votes (Like | Disagree)
Read All Comments