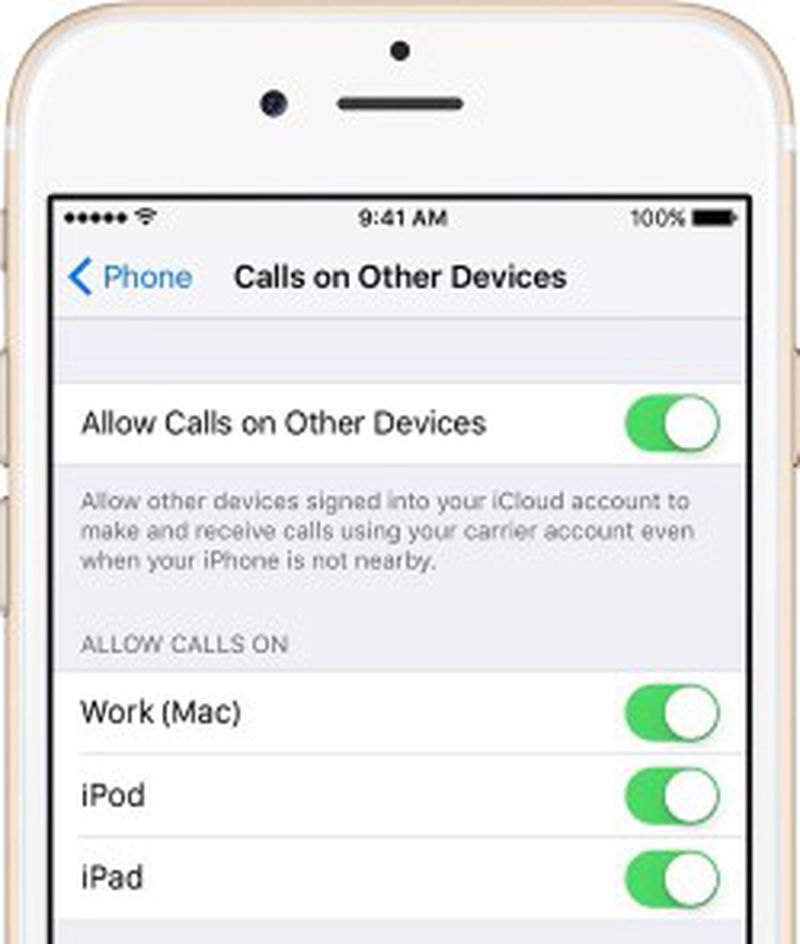 Alongside the launch of iOS 9.1, Sprint has implemented an enhanced Wi-Fi calling feature for its users, allowing them to make and receive calls on multiple iOS and Mac devices over Wi-Fi or a cellular connection.

Prior to today, it was possible for Sprint users to make and receive calls from iPads and Macs using an iPhone's cellular connection, but that functionality did not extend to calls placed over Wi-Fi when cellular signal was low.

The iOS call forwarding feature implemented with iOS 8 that allowed users to make and receive calls from multiple devices required Wi-Fi calling to be turned off, but that is no longer the case. Calls placed or received on devices other than an iPhone will now work over a cellular connection and when connected to Wi-Fi with Wi-Fi calling in use.

Receiving calls on multiple devices with the call forwarding feature also required devices to be on the same Wi-Fi network as an iPhone, but with enhanced Wi-Fi calling, that's no longer necessary. In fact, an iPad or a Mac can still receive a call when an iPhone is in another location entirely or turned off.

Sprint users can access the new enhanced Wi-Fi calling feature by downloading iOS 9.1, watchOS 2, or OS X 10.11.1 on their devices and making sure Wi-Fi calling is enabled on an iPhone by going to Settings --> Phone --> Wi-Fi Calling. Other devices can be set up to receive calls by going to Settings --> FaceTime --> Calls from iPhone. All devices must use the same Apple ID and they must be signed into iCloud.

avanpelt
Sprint is now able to allow users to make a regular phone call from a Mac or an iPad even when the iPhone is turned off? How'd they manage to do that?

Oh wait, I get it. The calls hardly go through with the phone so if you just turn the phone off, you have the same experience on your iPad and Mac, as well. ;)
Rating: 2 Votes

I know you have to pretend you're wearing clothes, Emperor. But we all know your network has its really crappy spots, also. Some of them in major cities. Your public arrogance about the superiority of your network would be hilarious, if it weren't so infuriating.
Rating: 1 Votes

So TLDR version of this article = The carrier wars continue lol

I definitely know that's what they think, but it still makes them compete and match at the very least what AT&T is doing pretty much continuously (and vice versa with AT&T matching them), which is why this is quite odd given that AT&T has enabled this already and is enhancing it (not to mention the rest of the top carriers), and Verizon isn't even really giving an update related to it, let alone actually doing something about it.
Rating: 1 Votes

markgpearse
I have this with tmobile. It's really exciting when I'm working at my iMac, with my Apple Watch on my wrist and my iPhone nearby and my iPad not much further way and a call comes in...
Rating: 1 Votes

I know you have to pretend you're wearing clothes, Emperor. But we all know your network has its really crappy spots, also. Some of them in major cities. Your public arrogance about the superiority of your network would be hilarious, if it weren't so infuriating.

Seriously. I don't get how Verizon is so far behind not just one service that has it, but basically all the top ones that it competes against that have it now and are enhancing and improving it.
Rating: 1 Votes

Good call on that.

Do you mean this article or an actual FAQ/Specs on an Apple help page?

If it's on Apples actual site again I say odd and get your head in the game Apple...

Sorry, yes specs on Apple support page says 5c or higher is capable but they leave it up to the carrier
https://support.apple.com/en-us/HT203032 reads
To place a Wi-Fi call, you need an iPhone on one of these carriers:

iPhone 5c and later are capable of Wi-Fi Calling. Check with your carrier on which models are supported.
Rating: 1 Votes

SuperCachetes
Whoa. Sprint has something I'm actually envious of? This is truly the end.
Rating: 1 Votes

Seriously. I don't get how Verizon is so far behind not just one service that has it, but basically all the top ones that it competes against that have it now and are enhancing and improving it.

They said by mid 2015. I'd be surprised if they even roll it out. It's embarrassing how long they took to enable simultaneous voice and data on the iPhone.
Rating: 1 Votes
[ Read All Comments ]