Samsung and TSMC Begin Production of A9 Chips for 'iPhone 6s'

Apple manufacturing partners Samsung and TSMC have started volume production of A9 chips for the so-called "iPhone 6s," according to DigiTimes. The report claims Apple requested last-minute changes to the chip layout, requiring both chipmakers to rework wafers, but the modifications are not expected to impact the release schedule of the next-generation iPhone.

Apple's iPhone 6, iPhone 6 Plus and new iPod touch are powered by the A8 chip
TSMC will reportedly begin mass production of A9 chips based on a 16nm process in the fourth quarter of 2015, and is also expected to manufacture fingerprint sensors and audio chips on a contract basis for future iPhones. Conflicting reports have surfaced over the past several months suggesting that Samsung, TSMC or a combination of the two would be responsible for A9 chip production.

DigiTimes has a mixed track record at reporting on Apple's upcoming plans, but it does have close connections with the overseas supply chain, and A9 chip production in July is reasonable with less than two months until the next iPhone is expected to launch. Apple will reportedly order a record-breaking 85-90 million "iPhone 6s" units from suppliers by the end of 2015.

The much-rumored "iPhone 6s" and "iPhone 6s Plus" are expected to be announced in September and could feature the same 4.7-inch and 5.5-inch screen sizes, an A9 processor with 2GB of RAM, Force Touch, a faster Qualcomm LTE chip, an improved 12-megapixel rear-facing camera and 7000 Series aluminum. The overall design of the smartphones will likely be nearly identical to the iPhone 6 and iPhone 6 Plus.

The overall design of the smartphones will likely be nearly identical to the iPhone 6 and iPhone 6 Plus.

Nearly identical… except for increased thickness to fix the protruding camera, please?

If this is too much, could it at least rest flat on a table with something like my ingenious redesign:

This is a ludicrous thing to say. Developers are nowhere near maximising the potential of the current iPhone hardware
Score: 10 Votes (Like | Disagree)

I don't want to sound rude, but do you have any clue what you are talking about? Have you develop, written or optimise any kind of application, code or game before or had any kind of experience with the matter and the dynamics of multi-threaded workloads and how you can efficiently leverage several processing cores?

Because quite frankly it doesn't seem so from your post. Even triple-A games on desktop operating systems are able to utilise more than one to two threads efficiently. Some games expand their workload over four-threads, but what they do is split the workload they would normally use from a single-thread / core and just spread it across available cores dynamically. This will in most cases ensure more headroom for multi-tasking, but it won't use the additional cores in any efficient matter, not at all.

So let's say Grand Theft Auto V requires a single-core from a Intel SandyBridge architecture at about 2,4GHz clock speeds to make things calculate efficient enough to ensure 60 FPS on the CPU side, adding multiple-cores will simply split the load over several cores. So instead of you having your one out of two / four cores being at 100%, you have either two at 50% or four at 25% during gameplay. This is of no real benefit to the game of user-experience other than leaving more freely available resources for other tasks but who really multi-tasks while gaming?

The way multi-threaded workloads and gaming works as of today won't let you actually accelerate your games over multiple cores. So if GTA V did require 2,4GHz Sandy-Bridge architecture to handle the calculations required for 60 FPS on the processing parts of things, you can't simply have a 1,4GHz with two cores and think splitting the workload over twice the amount of cores resolves into having twice the power to run the game.


This is the major reason why we don't see a huge increase of CPU cores on notebooks and desktop systems, because there is no real benefit of having them as consumer workloads is not scaling well over multiple threads. Only in scalable scenarios like servers and rendering workstations and whatnot you will have added benefit of having a lot of CPU cores at your disposal.


And mobile applications are even less multi-thread efficient compared to desktop applications, want you want for your mobile phone is to have the highest possible IPC performance (instructions per cycle) which has nothing to do with the amount of cores you have, but is achieved through efficient architecture and clock speeds.

this is a joke right?

people would be posting how they messed up taking a photo because they mistook the camera placement.

You misinterpreted AngerDanger's post. You see, there are actually four cameras, which all merge together to create a coherent and beautiful image.

Though the initial prototype was a little bulky (see below), it's sorted with this new design. 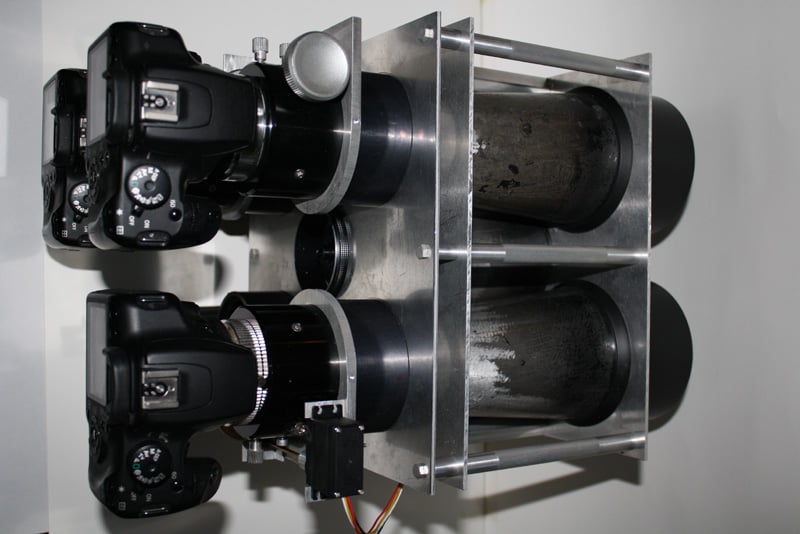 What apps in particular are you talking about? More cores is not always a better thing. When multicore processors first came out, for a long time people were recommending sticking with dual-core for gaming because you wouldn't see a benefit with quad-core (due to lack of software optimisation).

Plus Apple's innovations towards improving single-threaded performance means that when they finally do make the jump, the performance difference will be noticable. Adding more cores or just throwing better specs at a device is such a lazy way to compensate for poor software optimisation.
Score: 6 Votes (Like | Disagree)
Read All Comments