In one of its latest efforts to bolster its mapping capabilities, Apple appears to have acquired Coherent Navigation, a Bay Area GPS-related firm founded in 2008 by engineers from Stanford and Cornell.

One of Coherent Navigation's areas of focus was High Integrity GPS ("iGPS"), a system that combines signals from the traditional mid-earth orbit GPS satellites with those from the low-earth satellites of voice and data provider Iridium to offer greater accuracy and precision, higher signal integrity, and greater jam resistance. Iridium touts iGPS as having the potential to provide location information accurate to within centimeters. 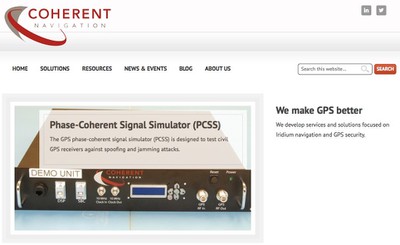 A number of Coherent's key employees recently began working for Apple, including tech veteran and CEO Paul Lego in January and co-founders William Bencze and Brent Ledvina as of last month. Coherent's website has also been taken offline, but on April 30 the name servers for the domain were updated to point to Apple's servers.

It is unclear exactly what the Coherent Navigation team is working on at Apple and whether there was a specific technology Apple was interested in or if it simply wanted to apply the expertise of Coherent's employees to its own projects. Lego simply notes that he is now a member of Apple's Maps team, while Ledvina and Bencze are working in similar location engineering roles.

Coherent Navigation would be just the latest in a long string of mapping-related acquisitions Apple has made over the last several years, including the developers behind Pin Drop, Locationary, WifiSLAM, Hopstop, Embark, and Broadmap. Apple has continued to improve its mapping services since a rough transition away from Google Maps with the release of iOS 6 in 2012, with the company working to add features like transit information and perhaps Street View-like imagery to its services.

Update: Apple has given its standard confirmation statement to The New York Times.

“Apple buys smaller technology companies from time to time, and we generally do not discuss our purpose or plans,” the company said.

No other details on the deal have been released.

AppleSauce007
I predict Apple Maps will totally blow away Google Maps after after the June 10th WWDC announcements. They have been working on this release for about 3 years and have purchased the following companies:

Read about these companies expertise and you will better understand Apple Maps. The Apple Maps platform already beats Google Map in several categories not to mention user interface and architecture.

If Apple bought Coherent, it is for their expertise in working with Iridium's network which allows communication globally when out of cellular range. You can buy an Iridium Go on Amazon for about $800 which will allow you to communicate globally with your cell phone.

Check it out here: https://youtu.be/hcrBE5hkuRU

Check out this Stanford presentation...
http://scpnt.stanford.edu/pnt/PNT09/presentation_slides/12_Bencze_iGPS.pdf
Score: 17 Votes (Like | Disagree)

Richardgm
I wonder if Apple knows that it is the data within the maps that is woefully inadequate?

Apple maps is unusable in the Caribbean and the Middle East.
Score: 14 Votes (Like | Disagree)


That's what I was thinking. A self driving car needs a very detailed map / navigation system.
Score: 13 Votes (Like | Disagree)

gigapocket1
I've seen some big advances in the Maps on my phone.. I still keep Google Maps as a backup.. But its definitely getting better..
My only disappointment is the search.. Some things aren't their.. or lets say I search for iHop.. Well if an iHop is 2 minutes away.. it only shows that iHop. It doesn't allow me to zoom out and see all iHop locations so that I can choose which one I want to go to.. And thats what sucks
Score: 10 Votes (Like | Disagree)

I wonder if Apple knows that it is the data within the maps that is woefully inadequate?

Apple maps is unusable in the Caribbean and the Middle East.


Heaven forbid they continue to develop hardware while the software continues to play catch up, which was always going to take years to improve.

I primarily use GPS in the backcountry where there is no cell service and online maps cannot be used. Any improvement in signal retention is helpful.
Score: 7 Votes (Like | Disagree)


You might be on to something. A self-driving car would need super accurate gps to navigate safely. This company claims that their gps is accurate to the nearest centimeters?!?

On the other hand, with all of these map related acquisitions, Map will be so cool in the future. People are complaining about Apple Map now (I always find it very good for my navigations) and don't look to the future and just simply discard map. I call that short sighted.
Score: 7 Votes (Like | Disagree)
Read All Comments

Sunday August 1, 2021 6:21 am PDT by Sami Fathi
Models of the Apple Watch Series 6 with titanium cases part of the "Apple Watch Edition" collection is currently widely unavailable for pick-up in several of Apple's retail stores in the United States and is unavailable entirely for delivery in major markets. Noted by Bloomberg's Mark Gurman in the latest edition of his "Power On" newsletter, titanium models of the Apple Watch Series 6,...
Read Full Article • 126 comments