Wednesday March 4, 2015 2:53 pm PST by Juli Clover
Apple has opted to delay production on the rumored larger-screened "iPad Pro" due to issues with display panel supply, reports Bloomberg. Manufacturing on the tablet will reportedly begin in September, rather than earlier in the year.

Production of the 12.9-inch-screen iPad is now scheduled to start around September because of delays involving the supply of display panels, said one of the people, who asked not to be identified because the details aren't public. Apple had initially planned to begin making the larger version this quarter, people familiar those plans had said.

This isn't the first time that rumors have hinted at delays for the iPad Pro. Apple was said to be targeting an early 2015 release date for the tablet last year, but those plans were reportedly put on hold. Back in October, The Wall Street Journal said that Apple had opted to delay mass production on the iPad in order to focus on iPhone 6 Plus production, and in November, KGI Securities analyst Ming-Chi Kuo said production could be delayed until Q2 2015 because of difficulties related to the production of display components. With production delayed until September, the tablet could see a release in late 2015. 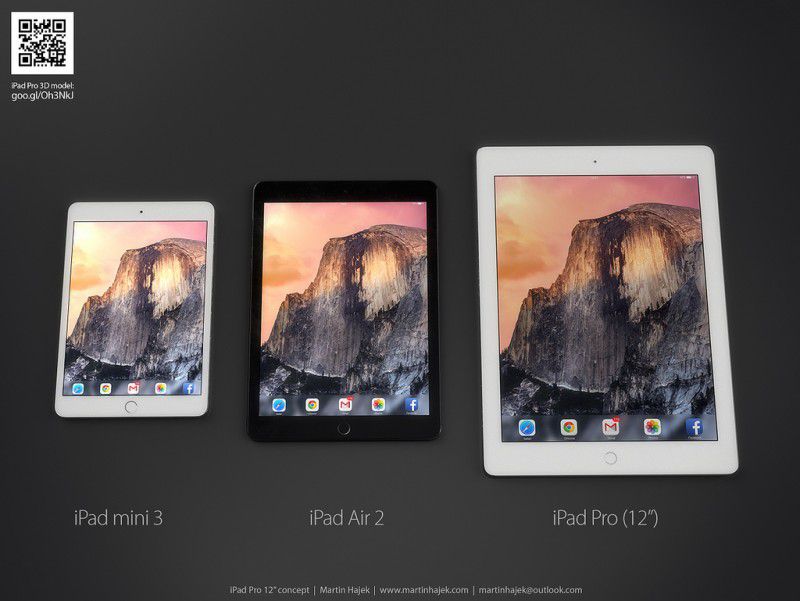 Rendering of the iPad Pro by Martin Hajek

Apple is planning to use the "iPad Pro," as the media calls it, to boost its flagging iPad sales. The tablet is expected to measure in somewhere between 12.2 and 12.9 inches, dwarfing both the 9.7-inch iPad Air 2 and the 7.9-inch iPad mini 3.

It may be targeted at the enterprise market, and rumors have suggested it could sport an "ultra" high-resolution display and stereo speakers at the top and bottom edges of the device for an improved audio experience. It may also ship with an optional stylus accessory.

mpavilion
Looks like it's targeted at the "hella large bezels" market...
Rating: 39 Votes

How about an accurately named iPad Large?


Or iPad Vente for the hipsters.
Rating: 18 Votes

An iPad Pro isn't happening until there's a new iOS with Pro-only features, to help it sell.
Rating: 12 Votes

Tozac
Should really look more like this... Not just an oversized iPad 2/3/4.
Rating: 11 Votes

farewelwilliams
no touch id in the first gen.
Rating: 9 Votes

devilbond
What? A delay? How unlike the iPad Pro...
Rating: 8 Votes

AlexC123
I know this isn't MacFacts.. But seriously, can't some threshold be applied to these utterly unsubstantiated ego trips?!
Rating: 4 Votes


With that said, all the serious work would probably still be done on a Mac.

I work in film. On sets, up to 6 days a week and up to 16 hours a day. In particular my job is that of coordination and record keeping. I have used an iPad and iPhone and only those for a good year and a half. Given that a screw up in my job duties can literally cost hundreds of dollars an hour I'd say its pretty serious

Never really thought it would launch before the next annual iPad refresh. I just hope they move the iPhone annual refresh back to June or July so everything doesn't all come out at the same time. IMO that's why iPad sales are struggling.


iPhone sales aren't going anywhere. They like doing the new iOS and hardware together too much. And they love having the preview at WWDC since that is what developers are all about.

I suspect that the claims of 'struggling' sales are overblown. Sure they aren't likely selling as many and sales numbers aren't rising by leaps and bounds every month. But there are tons of sales. More and more companies and schools grabbing iPads. Heck on the lot where my company has offices we had a sit down in November with no less than 10 other production companies who wanted to know about how we use our iPhones and iPads on set and I know at least 3 of them in the past 2 months decided to buy cause my company has worked with them on stuff.


Steve never said that. Its really getting lame that folks keep using the same misquote.

Go back and watch the keynote. He said 'required' styli were the issue. the phones and PDAs of that time didn't work if you lost the pen. So the iPhone was made such that the only 'stylus' you needed was your finger. Nothing was ever said against using a stylus if you wanted to. heck they even sold them in the stores the first couple of years.
Rating: 3 Votes

brinary001
To me this proves that there will be digitizer support. Why would they be having so much trouble just producing a slightly larger display? They wouldn't.... Unless they were trying to perfect stylus input, which I think (and hope) they are :).

I've been using my iPad for several years now, and I am realizing I really don't like tablets that much. My next purchase will be the latest version of the the MacBook Air. Tablets are too limited for my needs. I think a lot of people agree, and the sales numbers show this.

Surface Pro, yo. The only thing that MIGHT make me deviate away from my Surface addiction is the iPad Pro. But that's only if Apple starts respecting their iPad line more and start making it as more of a computer and not a play thing.
Rating: 3 Votes