Following an influx of rumors surrounding the "iPad Pro" and a possible stylus accessory launching around the same time, well-known 3D modeler and designer Martin Hajek has created a series of concept renderings for each device on his blog. 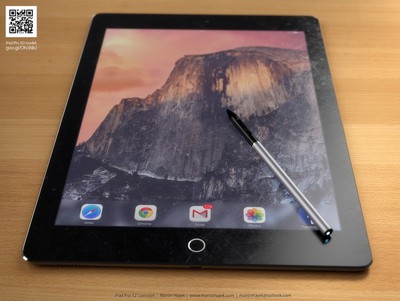 Hajek's models include several details rumored for the iPad Pro, which has been claimed to carry a 12.2 - 12.9 inch display and fall in line with the rounded design of the current iPad Air 2 and iPad Mini 3. The renderings are based on some design drawings that surfaced last November, with Hajek noting the design brings back the larger bezels seen in earlier-generation iPads. Consistent with the schematics and other rumors, he also places speakers on the top and bottom and edges of the device, allowing for stereo sound when used in landscape orientation.

Otherwise, the iPad Pro sticks by most of the current-generation standbys, including volume rockers on the right side of the device, a lock button on the top right, a Lightning charger on its bottom center, and a Touch ID capacitive home button sitting in its normal central position.

Beyond the iPad Pro itself, Hajek also imagines a possibility for Apple's rumored in-house stylus. Borrowing "the design language of the iPad Pro", he added in a capacitive +/- slider for additional operations, and also elements of the Apple Watch as well, including biometric sensors and a digital crown. While the stylus renderings are interesting, a lack of leaks or even specific details about the accessory means the images are not based on any actual information.

The new renderings show off the iPad Pro mostly in the Silver option, though it's likely to receive the other two usual color options of Space Gray and Gold. The latest rumors suggest the iPad Pro may launch sometime in the late spring or early summer of this year. The full suite of renderings featuring the iPad Pro and stylus can be found on Hajek's blog.

Rogifan
How in the world is this newsworthy? These renders aren't based on anything substantial. He just took an iPad 4, made it 12" and added a pen that may or may not look anything like an Apple stylus (assuming one is in the works).
Score: 37 Votes (Like | Disagree)

bushido
whats the point of these ...?

heres a render of the rumored iPhone 12 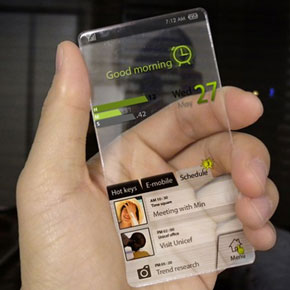 Not much imagination gone into that is there :rolleyes:
Score: 22 Votes (Like | Disagree)

t0mat0
Hope they add "Find My Stylus" to iCloud.
Score: 17 Votes (Like | Disagree)
Read All Comments

Tuesday May 18, 2021 5:39 am PDT by Joe Rossignol
Apple plans to launch new 14-inch and 16-inch MacBook Pro models with an improved iteration of the M1 chip as early as this summer, according to Bloomberg's Mark Gurman. The new chip is said to include a 10-core CPU with eight high-performance cores and two energy-efficient cores, with 16-core or 32-core GPU options. Gurman said the next-generation Apple silicon chip will also support up to...
Read Full Article • 189 comments

Sunday May 16, 2021 4:04 pm PDT by Sami Fathi
Earlier today, Apple Music began teasing a special announcement with the tagline "Get Ready – Music is About to Change Forever." This teaser comes amid a rumor that Apple is preparing to announce the third-generation AirPods alongside a HiFi, or lossless audio streaming tier for Apple Music on Tuesday, May 18. Now, references to "Apple Lossless," "Free Lossless," "Hi-Res Lossless," and...
Read Full Article • 141 comments

Monday May 17, 2021 8:29 am PDT by Joe Rossignol
Apple Music's incoming Spatial Audio with Dolby Atmos and Lossless Audio features will be available in June on devices running iOS 14.6, iPadOS 14.6, macOS 11.4, and tvOS 14.6 or later, according to Apple. Apple said thousands of tracks will be available in Spatial Audio with Dolby Atmos at no additional cost, with more added regularly. Already available on the AirPods Pro, Apple describes...
Read Full Article • 189 comments