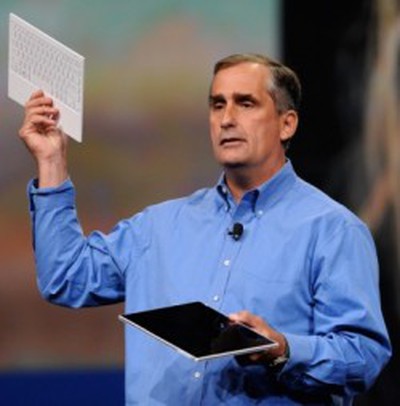 Intel CEO Brian Krzanich appeared today on CNBC’s Squawk Box to talk about the financial future of the technology company. Following discussions about Intel's disappointing Q1 forecast and flat PC sales, CNBC anchor Betsy Quick questioned the executive about rumors that Apple may eventually drop Intel chips from its Mac computers in favor of its own processors.

Unfazed by the questioning, Krzanich toed the company line, revealing no new information about the future of Intel's relationship with Apple and simply calling it a "strong" one.

I just hear the same rumors. Our relationship with Apple is strong and their products are great. Apple is always going to choose the supplier who can provide them the most amount of capability in innovation for them to build on, for them to innovate. They're a company based on innovation. Our job is to continue to deliver parts that have that capability give them that, that are better than our competitors. And then they want to use our parts. So I wake up every morning making sure that across the board, whether it's Apple or Lenovo or Dell or any of our customers -- we have to provide the most competitive part: performance, price, reliability, all of those.


In his latest report, KGI Securities analyst Ming-Chi Kuo offered the prediction that Apple may launch ARM-based Macs in the next few years. In this scenario, Apple would replace the Intel chips it currently uses with custom designed A-series chip, allowing the company to better time processor upgrades with new product launches. Apple last year was forced to delay major product launches across its MacBook Air and MacBook Pro lineup, offering only minor processor bumps due to delays in Intel's Broadwell processors.

Rumors of Apple's interest in ARM-based Macs are not new, with earlier reports suggesting Apple has developed ARM-Based prototypes of the iMac, Mac Mini, and a 13-inch notebook model. If the rumor pans out this time, the switchover to ARM processor would initially target low-end machines that would benefit from the low battery consumption of the ARM-based architecture. Future expansion may be possible as improvements in Apple's A-series processor begin to rival the performance of Intel's entry-level offerings.

joshwenke
It better be strong or my love for Macs won't be.
Score: 50 Votes (Like | Disagree)

... No one needs Windows compatibility (I don't know any Mac owner that uses Windows) and the .25% of Mac users that do can go buy an Intel Mac.


I do, as do many of my coworkers. It is a vital feature that makes a huge difference for me. Your post is ignorant, irrelevent, and incorrect, so it is fortunate that your opinion has no influence on Apple's decision making.
Score: 30 Votes (Like | Disagree)

vmachiel
Good. I don't want ARM in my machine. I want to virtualize, don't want to wait for all new apps (that often never come). O yeah, and ARM is good with power? Only Intel can fab at 14 nm and you can bet they are going to be the first to the next node as well.
Score: 21 Votes (Like | Disagree)

Traverse
Good to hear. When Apple drops Intel, I will most likely have to drop Macs. That would break compatibility with so many OS X apps (and developers would take a great amount of time to recode their apps, assuming they did at all) and it would break Windows compatibility. As much as I like OS X, I occasionally need to use Windows.
Score: 18 Votes (Like | Disagree)

Cloudsurfer
Ofcourse Intel is going to say that. Apple is their customer. Did you expect Intel to say, yeah screw them and their A-chips?

This article taught us nothing.
Score: 17 Votes (Like | Disagree)

GalileoSeven
Count me as one who will have bought his last Mac if this goes through (which, given the complexities of recompiling so much software, seems highly unlikely).......
Score: 17 Votes (Like | Disagree)
Read All Comments