French site MacBidouille revives rumors that Apple is actively developing ARM processor based Macs. According to a source that they describe as reliable, Apple has prototypes of several ARM-based machines, including an iMac, Mac mini, and 13" Notebook with 4-8 64-bit ARM Quad-core processors. 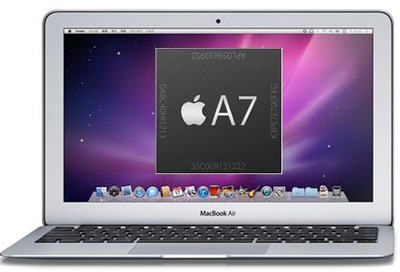 These machines are reportedly far along in development, and come with a new keyboard that incorporates a large-format Magic Trackpad. Apple might even be ready for an announcement but is reportedly hesitant to make the move.

MacBidouille isn't a frequent source of rumors, so its hard to gauge its source's credibility, but rumors of ARM-based Macs have been circulating for years. It seems likely that Apple has prototyped such devices, but many have doubted the feasibility of moving forward with such a plan.

The first inklings of such a plan might have come when Apple threatened to abandon Intel's chips if they didn't work to slash power consumption. While AMD might have been one way to go for Apple, the first rumors of an Apple migration from Intel to ARM processors appeared earlier that year. Later, a report claimed that Apple already had an ARM (A5) powered MacBook Air in their labs back in 2011.

An analysis in 2012 suggested that Apple shifting from Intel to ARM wasn't implausible but it faced several hurdles. The most significant one was Apple's own ARM chips being able to keep a pace with Intel's future roadmap.

Apple, however, has been making great strides in performance in their ARM processors. The A7 is described as desktop class even in an independent analysis. In fact, the A7 chip is currently being underutilized in Apple's iPhone and iPad devices, leaving some of its power untapped.

appleguy123
I really hope that this isn't true.
Score: 61 Votes (Like | Disagree)

Blakeasd
Please no. I can't take another processor transition...
Score: 44 Votes (Like | Disagree)

terraphantm
A big reason I switched to a Apple is because I could dual boot windows (and run it in a VM at basically native speed). As much as I like OSX, most of my work still requires windows, so if they switched to ARM, I'd be switching back to PCs
Score: 28 Votes (Like | Disagree)

It is clear to me that an ARM-based laptop will happen. Timing is everything and will only be introduced when it is ready. In this date and age, it doesn't make sense to have laptops that still get so hot. ARM solves that issue.
Score: 25 Votes (Like | Disagree)

Monday July 6, 2020 6:55 am PDT by Eric Slivka
Amid rumors and hints of a forthcoming update for the iMac, supplies of Apple's current 27-inch iMac continue to dwindle with mid- and high-end stock configurations now seeing shipping estimates pushed back into September. The 27-inch iMac has seen tight supplies and extended shipping estimates for months now, but the situation has been gradually worsening to the point where new buyers can...
Read Full Article • 61 comments

Wednesday July 1, 2020 3:40 am PDT by Tim Hardwick
As expected, Apple's first MacBook Pro with a Retina display is now officially classed as "obsolete" worldwide, just over eight years after its release. In a support document, Apple notes that obsolete products are no longer eligible for hardware service, with "no exceptions." This means that any mid-2012 Retina MacBook Pro 15-inch models still out there that require a battery or other...
Read Full Article • 206 comments