Apple's iPad sales are down for the third straight quarter according to the company's earnings for its fourth fiscal quarter of 2014, selling a total of 12.3 iPads which is down from 14.1 million units in the year-ago quarter. The company has sold 68 million iPads in 2014 and has sold 237.5 million iPads total. The news comes after the company announced its new iPad Air 2 and iPad mini 3 last week at its special media event. 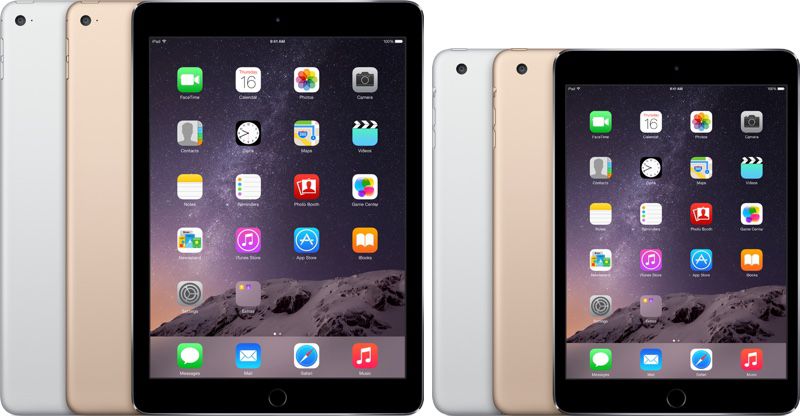 Earlier this year, Apple CEO Tim Cook commented that the drop in iPad sales over the past two quarters was just a "speed bump" for Apple. In the company's third-quarter earnings call, Cook highlighted overall sales of more than 225 million iPads since the device launched in 2010 and suggested the tablet market as a whole was still "in its infancy." The CEO also stated at the time that "significant innovation could be brought to the iPad" ahead of this year's new iPad releases.

The new iPad Air 2 and iPad mini 3 will go on sale this week, although the company focused primarily on the former at its event. The iPad Air features a faster A8X processor, a Touch ID fingerprint sensor, a profile that is just 6.1 mm thick, and a new gapless laminated display that produces sharper images. Meanwhile, the iPad Mini 3 includes a few changes aside from the Touch ID home button and a new gold color option.

Apple is also said to be preparing to launch a new 12.9-inch iPad Pro early next year, although some reports have claimed that mass production of the larger tablet has been put on hold to shift resources towards iPhone 6 plus production. The display of the larger tablet will reportedly near ultra high-definition quality and will likely ship with the faster A8X processor.


Pretty sure he's not talking about those serving as first choice speakers, but it's nice to have them when you need them.

e.g. playing some music in the kitchen whilst you're cooking, no need for high fidelity there, or when you just want to watch the occasional Youtube video together with a friend on the couch or something.

I use my iPad's speaker often enough to want stereo and most importantly: they should be placed somewhere that makes some actual sense.

hexor
Maybe they need to cut their profit margins some. They are also making the product lineup extremely confusing by having so many old models listed now. That is the same mistake Apple started to make before Steve Jobs came back and had to clean house.
Rating: 5 Votes

firestarter
iPad development has been unimaginative over the past couple of iterations - and the platform is stagnating. The only meaningful change we've got is 'thinner'.

- What about improving the sound? Android and Windows tablets offer stereo for media viewing in the landscape view. iPad does not.

- Form factor - as a media consumption device the 4:3 screen is a poor choice, wasting a lot of screen real estate top and bottom of a TV program or movie

- Lockdown - expansion limitations preventing the use of external storage and camera memory cards across third party apps limits the iPad as a creative tool. I've switched to taking a MBA on trips because the iPad just doesn't work well in this space

- Screen and OS design - old, old, old and a poor use of space. Let me pack more icons on a screen and arrange them as I want, for goodness sake!

iPad functionality just isn't looking as attractive compared to lighter laptops with better battery capacity and more powerful phones with bigger screens. It needs to expand its functionality or be squeezed out.
Rating: 4 Votes

elmateo487
I wonder if the crippled mini was a way to combat this, and drive up iPad Air 2 sales.
Rating: 4 Votes

I dunno. A phone is an essential device. I was wrong about iphone sales ranking with full price purchases especially when carriers give 0% financing for cell phones. I Thought $650-850 full price iPhones would drop iphone sales particularly in the USA but it hasn't.

Most of it has to do with people needing an iPhone (upgrade) regardless of full price or financing or subsidy price.

Tablets are not that essential.


How many people actually buy them full price though? It has to be less than 1 percent.

Queue the entrance of all the armchair CEOs and Product Managers, you know the ones who would have made "totally different decisions" (despite their ideas not making *any* real world business sense).

Of course they're all full of ideas about how to turn things around, which is ironic, because if their ideas were indeed so great, I'd assume they'd be quite in demand by lots of companies (or even one company that consumes all their time, something like a major Fortune-ranked multi-national). How do they all find the time to offer such astute suggestions to companies that aren't their clients (or employers), and why are they not charging for their services?

Perhaps not so astute or prescient these ideas, but simply spectator criticisms delivered from the comfort and safety of the anonymous internets, where ideas don't have to be proven, they don't have work, no one cares about your lack of experience, and where the only skill one needs is hubris.

Too bad for Apple all these company saving decisions they'll need in the future are right here, dead before they even had a chance to live. :rolleyes:


Cute rant. But something like giving the iPad Mini a worthwhile upgrade doesn't take a genius.
Rating: 3 Votes

wlossw
The only reason iPhones sell so well and are upgraded so often is carrier subsidies. IPad will never have a 1-2 year upgrade cycle until the perceived cost is closer to 200 than it is to 500. I think moving last years models aggressively lower in price has the potential to jump start iPad sales.
Rating: 3 Votes

koulmj
Well they're so expsensive and people can continue to use old ipads...i wonder how many ipad 2 and originals are still out there.
Rating: 3 Votes
[ Read All Comments ]