Apple is planning to launch its much-rumored 12.9-inch iPad in early 2015, reports Bloomberg. Hints of the tablet, which has been dubbed the "iPad Pro" in rumors, first appeared in mid-2013, with a prospective 2014 launch date. Recent rumors, however, suggested plans for the tablet had been put on hold. 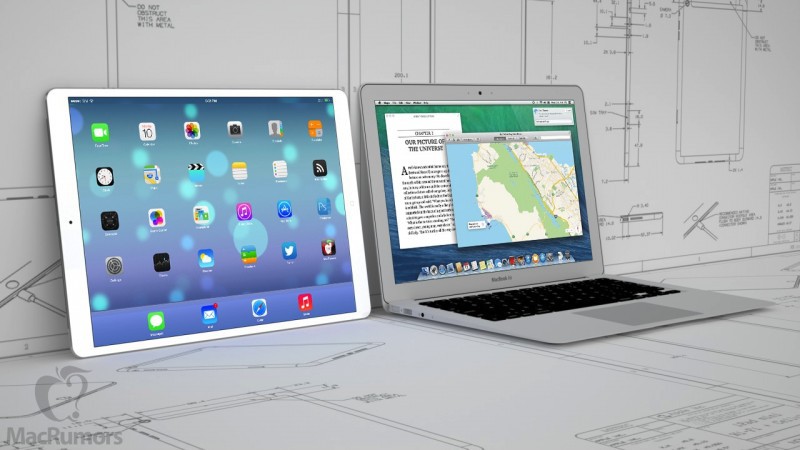 The new iPad will have a screen measuring 12.9 inches diagonally, said the people, who asked not to be identified because the details aren't public. Apple currently produces iPads with 9.7-inch and 7.9-inch displays. The Cupertino, California-based company has been working with suppliers for at least a year to develop a new range of larger touch-screen devices, said the people.

According to rumors, the larger 12.9-inch iPad will include a high pixel density with a display that nears ultra high-definition quality. It will likely adopt many of the design elements offered in the current iPad Air and iPad mini, like an ultrathin chassis and narrow side bezels.

Bloomberg suggests that the larger tablet is an effort to "shake up the iPad line" as sales of the iPad have been on the decline for the past two quarters. The larger tablets may appeal heavily to businesses, a market that Apple is also aiming for with its recent IBM partnership.

Along with a larger "iPad Pro" Apple is also working on a second-generation iPad Air and Retina iPad mini, both of which are expected to include upgraded processors and support for the Touch ID fingerprint sensor.

"Battery issue resolved, iPad Pro is back on schedule"

"Apple having issues with LCD production"

"iPad Pro may or may not be released this year"

"iPad Pro put on hold for some reason"

"iPad Pro back on schedule for early 2015 release"

"Initial production to be in slow supply"
Score: 53 Votes (Like | Disagree)

lewisd25
I won't believe anything until Ming-Chi Kuo tells me its true.
Score: 15 Votes (Like | Disagree)

nepalisherpa
Here we go again! I don't see anything new since the last rumor.
Score: 13 Votes (Like | Disagree)

nagromme
Sounds awesome for artists/musicians/creatives. Or paired with an easily-removed Logitech-style keyboard cover (which, unlike Microsoft's Logitech imitations, have REAL keys that feel like a laptop).

A MacBook Air has certain big advantages over iOS. But iOS has its own advantages as well. I know people with iPads and keyboards that are much better served by that than by a Mac. (I'd call them "low end" users, except they're doing some really advanced creative stuff with that touchscreen!)

If this is real (in the market, not just the lab!) I don't see it being a top-selling blockbuster, and that's OK. The iPad Air size is the sweet spot for me and many, but I'm sure there's also a growing niche for bigger-screen touch computing to fill!

EDIT: And I do NOT think it would go for the same market the Surface aims for (albeit some overlap of course). That's a poor laptop coupled with a poor tablet, and doesn't know what it wants to be. It's for traditional desktop software--or why bother choosing one? Kind of neat in a way, but almost never the best choice. A true competitor to Surface would be a touch-based Mac (please no!) but I see little need for that in the near term. A larger iPad would be just that—with all the benefits of ease and app ecosystem that the iPad already has over Surface. What do people do with an iPad now? Do it bigger!
Score: 12 Votes (Like | Disagree)

maflynn
Didn't Tim Cook promise us (and the investors) a lot of great innovative products in 2014? Seems that list is shrinking down :(
Score: 11 Votes (Like | Disagree)

(Watch me be wrong)
Score: 11 Votes (Like | Disagree)
Read All Comments