The iPhone 6 may incorporate Qualcomm's MDM9625 LTE modem, according to a new photo of the device's supposed logic board shared by GeekBar (Google Translate, via G for Games). 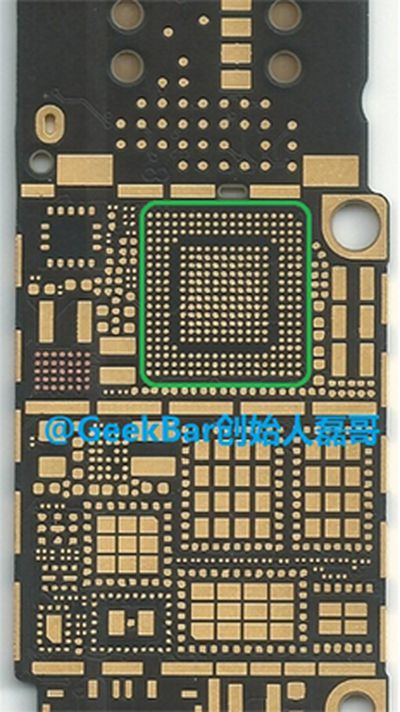 Originally announced in 2012 and featuring support for speeds of up to 150 MBPS and improved LTE networking, the Category 4 chip would mark an improvement over the Qualcomm MDM9615 chip found in the iPhone 5s and iPhone 5. The MDM9625 is also more durable than its predecessor, allowing for lower temperatures under heavy performance thanks to a refined 28-nanometer production process.

Along with those features, the MDM9625 includes support for next-generation LTE Advanced networks, which have yet to roll out in most parts of the world. News of the MDM9625's inclusion in the iPhone 6 also contrast a detailed yet sketchy report from VentureBeat posted earlier this month, which stated that the iPhone 6 would include a Category 6 LTE modem capable of 300 MBPS throughput speeds. That radio however was said to not include support for LTE-Advanced networks as featured in the MDM9625.

GeekBar also posted a supposed schematic from the iPhone 6 yesterday, which appeared to show support for near field communications (NFC) in the device. The schematic also references a NAND flash chip, which was originally interpreted by the website to be 1 GB of DRAM in the device.

Apple will announce the iPhone 6 at an event on Tuesday, September 9. The launch of the 4.7-inch version will probably follow soon after, as production issues may hold back the release of the 5.5-inch version until late this year or early next year. In addition to a larger display, the iPhone 6 will feature a thinner chassis, a faster A8 chip, an improved camera with stabilization, and more.

NAND flash memory is better than RAM I assume?

One is volatile, the other isn't. You can't really compare them.
Score: 12 Votes (Like | Disagree)

You assume wrong. Ram is faster then nand flash storage

Actually, while his assumption was incorrect, it was also an honest question. Your response on the other hand was both dead wrong and unnecessarily flippant.

NAND and RAM have nothing in common. One is a form of permanent storage, one is temporary storage, and they work completely differently. It's like comparing your hand to a storage facility and saying your hand is better because it's more versatile and can move.

Also it's theoretically possible to chain enough NAND together to get higher R/W speeds than RAM, which, incidentally, doesn't scale particularly well with increased # of channels. Latency's another issue, but given these two technologies have nothing in common, it's also a non-issue.
Score: 8 Votes (Like | Disagree)

Who cares... I turn off LTE otherwise my phone doesn't last for 2 hours!


Mines always on 4G here in the UK and last mostly all day... well not all day but more than 2 hours.
Score: 7 Votes (Like | Disagree)

Who cares... I turn off LTE otherwise my phone doesn't last for 2 hours!

Evil Spoonman
Some facts to contribute to this article...

- Presently very few operators are executing Carrier Aggregation. Australia will not have CA active until next year.
- CA is less important in markets where you can already find 20MHz of contiguous frequency. It will be a great advantage in markets which have disparate 5MHz or 10MHz bands which can be then aggregated to a 20MHz+ network.
- Many networks around the world are capable of running up against the boundaries of Category 3 LTE. The move to Category 4 will be good for reasons other than just CA.
- A hindrance for greater LTE capability is the inability to build more antennas into handsets. 2x2 MIMO is currently what the iPhone 5S has (Tx has a switch, which is why Tx is roughly half of Rx). Expect the iPhone 6 to be 2x2 again.
- Do not expect Apple to support another antenna chain for simultaneous EVDO voice and LTE on Verizon. VoLTE is on the way.
- MDM9625 is the obvious choice for inclusion in the iPhone 6. It was quite clear this was going to happen immediately after the 5S was announced a year ago. MDM9635 is not ready for this scale of production yet unless major changes are made to its design (lithography for one).

- LTE should not drain more power than WCDMA/EVDO. As you go further from a tower your phone boosts its transmit power. If you are in an area with poor coverage expect to pay a power penalty which will scale with the amount you use the radio. Note that often LTE can be much more efficient because it is a protocol that does not depend on high power antennas. Rather on wide carriers at lower powers. It is also much faster than 3G so it goes to sleep sooner and more often than 3G can. All of you experiencing power issues on LTE, there is an issue with your device or your environment.


An unrelated thought. Anybody questioning the need for faster LTE, more RAM, faster and more efficient SoCs or similar, really needs to reevaluate their position. Improved specs drive improved experience, drive new experiences. There is no argument to be made today for good enough in nearly any technology we possess. If you think it is good enough, then you don't understand what compromises were made in its construction.
Score: 3 Votes (Like | Disagree)

I'm no expert. But would it be weird to suggest that apple could be looking into using non-volitile memory as the RAM (although possibly slower) so that the memory doesn't need a constant power draw to retain its information? thus increasing battery life... Just a thought

No one is suggesting that. They are just saying the rectangle they first thought was RAM is probably a flash device.
Score: 3 Votes (Like | Disagree)
Read All Comments