Rumors of near field communications (NFC) support for the iPhone surface nearly every year, and this year's iPhone 6 rumors are no different, with reports split on whether the device will include the short-range communications technology frequently used for mobile payments. A couple of new reports do, however, come down on the side of NFC being included in the iPhone 6.

The first mention came in a separate leak showing a purported battery from Apple's 5.5-inch iPhone 6 late last week. That report from Taiwanese newspaper Apple Daily also mentioned in passing that the iPhone 6 will include a PN65V NFC chip from NXP, but offered no specific evidence in support of the claim. 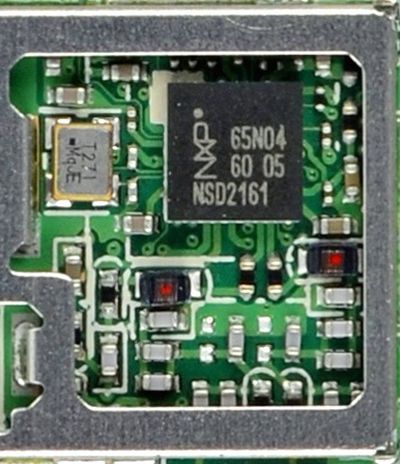 NXP PN65 NFC chip from Nexus 7 (Source: iFixit)
But now Chinese repair firm GeekBar has shared what is said to be a wiring schematic for just such a chip to be included on the iPhone 6. NXP has been the rumored partner for NFC in the iPhone 6, and the company's PN65 NFC package is used in a number of Android mobile devices.

Claimed iPhone 6 schematic for NXP PN65V NFC chip
While GeekBar's interpretation of such schematics is questionable given a leak earlier today in which it claimed the iPhone 6 will contain only 1 GB of RAM as the schematic appears to be addressing NAND flash rather than DRAM, the appearance of a PN65V chip on the schematics seems straightforward if they are indeed legitimate.

Apple has been rumored for some time to be working on a mobile payments system, with a launch coming perhaps as soon as this year in partnership with Visa. Details on the system are unclear, but Apple has reportedly been taking a "go-slow" approach for a number of years as it has tried to figure out the best way to deploy such a system without simply competing with existing providers "all fighting over their piece of the pie."

luckydcxx
not another wiring schematic ... this had people up in arms over "1 GB of RAM" :roll eyes:

I really see no need for NFC, with everyone that has android and the ability to use it, i have never seen 1 person use it in real life ... ever.
Score: 18 Votes (Like | Disagree)

Doubt it. Most retailers don't even have modes for accepting NFC payments. It'd be cool if they included NFC, but most people won't care (prediction).


NFC is required to be in PoS machines by October 2015 as decreed by EMV (EuroPay, MasterCard, Visa), or the retailer is liable for fraud. So, it's most definitely coming.

1Zach1
In 6 hours do we get another schematic update with contactless wireless charging?
Score: 6 Votes (Like | Disagree)

nepalisherpa
Hmmm...will believe it when I see it.
Score: 6 Votes (Like | Disagree)


Apple has this talent to make existing ideas "happen" for lack of a better term.

mp3 players existed long before the iPod but it took Apple's influence to change the music industry and how we consume music.

Tablets existed long before the iPad but it took Apple's influence to make it a household item.

You are correct in stating that no one cares about NFC but if Apple does indeed include it in the iPhone 6 you can bet there is something industry changing behind it.
Score: 5 Votes (Like | Disagree)
Read All Comments

Tuesday July 5, 2022 5:53 am PDT by Hartley Charlton
European Union lawmakers have approved landmark legislation to heavily regulate Apple, Google, Meta, and other big tech firms. The Digital Markets Act (DMA) and Digital Services Act (DSA) were proposed by the European Commission in December 2020. Now, collected in a "Digital Services Package," the legislation has been formally adopted by the European Parliament and seeks to address...
Read Full Article • 654 comments

Wednesday July 6, 2022 4:59 am PDT by Joe Rossignol
Apple today announced that the new MacBook Air equipped with the M2 chip will be available to order starting Friday, July 8 at 5 a.m. Pacific Time. Apple said deliveries to customers and in-store availability will begin Friday, July 15. MacRumors exclusively reported that Apple planned to launch the new MacBook Air on July 15, and the date has now been confirmed by Apple. Customers will be...
Read Full Article • 158 comments