Slated to arrive sometime next month, Kickstarter-funded iStick will allow iPhone and iPad owners to easily transfer files between their computers and iOS devices that are equipped with a Lightning connector. 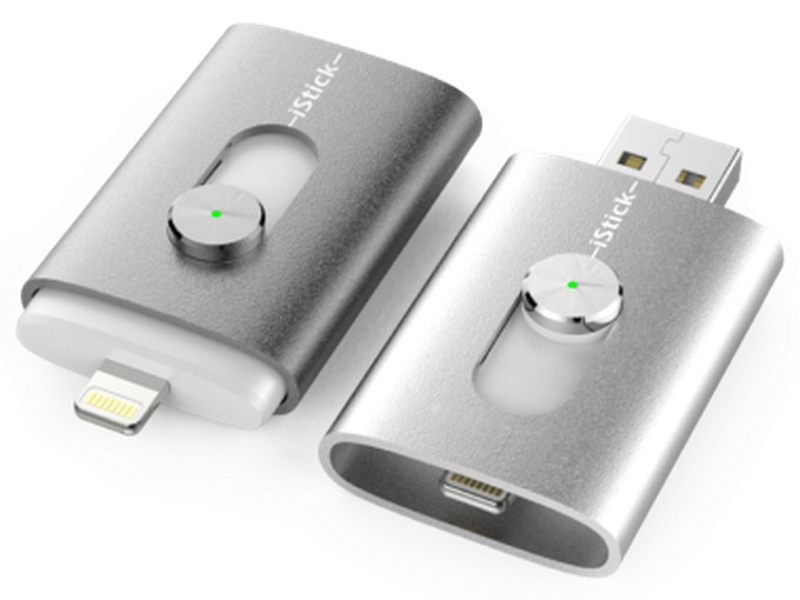 The thumb drive, which raised $1.1 million on Kickstarter, features a slider that allows users to switch between a standard USB connector and a Lightning connector that plugs into an iPhone 5/5s or a recent iPad model. Inside the plastic housing is a flash memory module offering 8GB, 16GB, 32GB, 64GB or 128GB of storage space.

While the iStick is automatically recognized by computers as a USB storage device, the iOS file system requires users to install an app to manage files. On the iOS side, you can use the USB stick to transfer files or play them directly from the connected thumb drive.

Recode's Walt Mossberg recently tested a pre-production model and found that device transfer files as advertised, but it is not as easy to use as a basic USB thumb drive.

In my tests, iStick file transfers worked between a variety of devices, including an iPhone 5s, an iPad mini, an iPad Air, a Mac and a Windows laptop. I was able to move and use files ranging from pictures, songs and videos to Microsoft Office files and PDFs — in both directions. [...]

The cumbersome part comes in when you want to use a file transferred to the iStick local storage area with another app on your iOS device, and it’s due to the way iOS manages files, not an issue with the iStick itself. Unlike on a computer, iOS devices don’t have a visible, system-wide file system. Instead, files that can be used by an app can only be fully used, beyond just viewing them, via that app.

The iStick is made by Sanho, which also produces the popular Hyper charging accessories. When it is available for retail sale, pricing for the iStick will start at $129 for the 8GB model and climb to $399 for 128GB, although Kickstarter backers who got in early were able to receive significant discounts on that pricing. The relatively high pricing is said to be related to Apple's Lightning licensing fees and its strict quality requirements.

cambookpro
Hmm, sounds good, may be useful, pretty good idea, Walt Mossberg likes it, sure it's not that easy transferring files on iOS, but looks OK, made by a reputable compan---$199 to $399?! :eek: :eek:

I'll stick with emailing myself everything.
Rating: 17 Votes

azentropy
I remember reading about this a couple months ago and thinking how cool it would be, until I saw the price.

The relatively high pricing is said to be related to Apple's Lightning licensing fees and its strict quality requirements.

For this price, no thank you.
Rating: 4 Votes

cmChimera
With all the cloud storage options and airdrop, why would this be a good option? Particularly at those prices?
Rating: 4 Votes

Gee, I must have missed where the article said it didn't work with either of those OSes... wait, no, I just re-read and there's nothing there about that.

Do you think that, just maybe, someone producing a product like this might have beta test versions of the new OSes to make sure it continues to work with them? Or that they might include the ability to apply a firmware patch to the device to keep it compatible in the future? Your assumption that this becomes obsolete with the new OSes is ludicrous.


You entirely missed the point. With the new versions of OSX and iOS in the fall it will be possible to transfer big files between Mac and iOS devices with both AirDrop (that doesn't need internet access) and iCloud Drive. That is what obsolete that ridiculous expensive dumbstick.
Rating: 3 Votes

Hmm, sounds good, may be useful, pretty good idea, Walt Mossberg likes it, sure it's not that easy transferring files on iOS, but looks OK, made by a reputable compan---$199 to $399?! :eek: :eek:

I'll stick with emailing myself everything.

Hah that was exactly what went threw my head as I read along. Dead On! I even had a dumb open jawed look on my face after reading the price.
Rating: 3 Votes

Jovian9
Nice idea but wow on that price. Seems way too high for my taste.
Rating: 3 Votes

roadbloc
This crap wouldn't even have to exist if Apple opened up the filesystem in iOS and allowed the dragging and dropping of files. Like every other phone out there.

This iStick is an expensive solution for an issue that shouldn't even exist.
Rating: 2 Votes

For this price, no thank you.