Analysts were sour on Apple last year, believing the company's stock would not climb over the $700 mark it crossed briefly in September 2012. Now with a 7-for-1 stock split and a continuing stock repurchase plan, this negative sentiment is changing with analysts revising their price targets for the again-hot stock, reports Fortune. 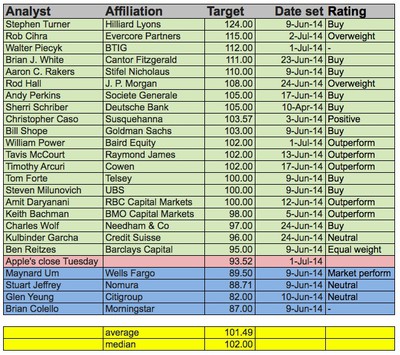 Table compiled by Fortune's Philip Elmer-DeWitt.
In recent weeks, analysts have adjusted their price targets by as much as 30 percent, with prices now ranging from a low of $87 from Morningstar's Brian Collelo up to a high of $124 from Stephen Turner of Hilliard Lyons. With the recent upgrades, the analysts' average price targets are now above Apple's all-time high once the stock split is accounted for.

As noted by BTIG's Walter Piecyk, some of this optimism stems from new U.S. carrier plans that will expand the number of customers eligible to upgrade to Apple's next generation iPhone and new leasing options that offer upgrades with a minimal upfront cost.

“Historically we estimate that ~20% of AT&T’s subscriber base was eligible for an upgrade during an iPhone launch quarter. That eligibility dropped to a low of the mid-teens in the second half of 2013 due to the stricter upgrade policies. We expect AT&T's new Mobile Share Value plan to increase the percentage of AT&T post-paid subscriber base eligible to upgrade to over 65% by the time the next iPhone launches. In absolute terms that is the difference between 10 or 11 million eligible for upgrades and 45-50 million.”

Wireless carriers in the U.S. have been modifying their consumer cellular and data plans, introducing no-contract options and new incentives that make it easier for customers to upgrade to new phones. Much of this change has been initiated by T-Mobile, which started its Uncarrier promotion in early 2013 with a no-contract Simple Choice plan that lets you pay for a phone in installments with a low upfront cost and early upgrades. Other carriers, such as AT&T, have followed suits with similar plans.


Until the iPhone 3G release, I never felt the need for a 'smart phone'. And today cant go without it for more than a few hours

Maybe after the release of a stupid wearable product you will see the need for it.
Score: 15 Votes (Like | Disagree)

"It's really hard to design products by focus groups. A lot of times, people don't know what they want until you show it to them."
— Steve Jobs
Score: 11 Votes (Like | Disagree)

GeneralChang
I have a plugin on my browser that replaces analyst with medicine man. It makes articles like this really quite entertaining.
Score: 10 Votes (Like | Disagree)


So you are shorting the stock, right?
Score: 8 Votes (Like | Disagree)

Eadfrith
Aren't these the same people who were trashing Apple not that long ago? :rolleyes:
Score: 4 Votes (Like | Disagree)
Read All Comments

Sunday May 9, 2021 2:00 am PDT by Sami Fathi
Zoom, a hallmark platform used by millions during the global health crisis, has been given access to a special iPadOS API that allows the app to use the iPad camera while the app is in use in Split View multitasking mode. This case of special treatment was first brought to attention by app developer Jeremy Provost, who, in a blog post, explains that Zoom uses a special API that allows the...
Read Full Article • 262 comments