As we creep closer to the fall release date of the iPhone 6, component leaks are becoming more frequent. While we originally saw the alleged front panel of the 4.7-inch iPhone 6 back in April, 9to5Mac has shared additional photos of the component.

Depicted in both black and white, the front panel in the photos features a slight gloss and somewhat tapered edges, lending credence to both rumors and mockups that have suggested the iPhone 6 will have rounded iPod touch-style corners. 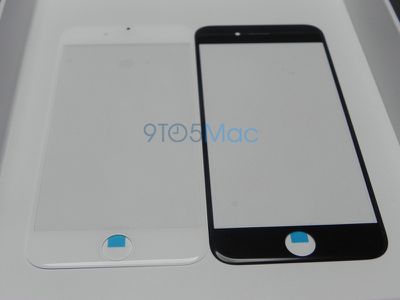 The black front panel was also compared to the front panel of the iPhone 5s, showing the size differences between the two devices.

In addition to these photos of the 4.7-inch iPhone's front panel, we have also seen images that depict manufacturing molds, backlight panels, and rear shells, but the latter component may not be from the actual iPhone 6 as a new rumor from Japanese site Nikkei has suggested the finished device may not have the thick antenna breaks that have been depicted on mockups thus far.

Though only the 4.7-inch iPhone front panel has been seen, Apple is expected to be releasing the iPhone 6 in a larger 5.5-inch size as well. It is unknown at this point if the larger iPhone 6 will be released at the same time, as there have been some conflicting reports on its potential launch due to production issues. The most recent rumors indicate a simultaneous release, however.

Both versions of Apple's iPhone 6 are expected to be thinner and lighter than the existing iPhone 5s, with an A8 processor and various camera improvements. Rumors have suggested the larger iPhone will be positioned as the premium version, offering features like optical image stabilization, a higher storage capacity, and a $100 price increase over the 4.7-inch version.

Update 1:10 PM PT: We've updated the information on the front-facing camera hole on the front panels based on new images.

I hope that it doesn't have the curved glass. These are terrible.

Samsung did this on the Galaxy S3 and switched back to flat on the S4 and S5.

It is impossible to have a screen protector that looks decent. Even protectors with curved edges just aren't the same.:(

I really never understood why people spend all this money on a gorgeous phone only to spend more money covering it up and life proofing it with crappy plastics. Why? I hope it has that glass, it looks sexy as hell.

Naked and not afraid here. Have been with all my phones 4 and up. No regrets and never any damage.
Score: 29 Votes (Like | Disagree)

SPNarwhal
how about you guys just make one unified post about allllllll of these little comparison "possible" fronts/backs/shells and just keep adding to that rather than jamming up the front page with the same exact post every other day?

I see people complain about this problem all of the time, and usually I feel they are unjustified and kindof just whiny, but this really is getting ridiculous.
Score: 20 Votes (Like | Disagree)


but i keep my iPhone in my pocket that is filled with diamonds, so i will still need a screen protector. :D
Score: 17 Votes (Like | Disagree)

how about you guys just make one unified post about allllllll of these little comparison "possible" fronts/backs/shells and just keep adding to that rather than jamming up the front page with the same exact post every other day?

I see people complain about this problem all of the time, and usually I feel they are unjustified and kindof just whiny, but this really is getting ridiculous.

The iPhone is the biggest product...
Score: 16 Votes (Like | Disagree)

how about you guys just make one unified post about allllllll of these little comparison "possible" fronts/backs/shells and just keep adding to that rather than jamming up the front page with the same exact post every other day?

I see people complain about this problem all of the time, and usually I feel they are unjustified and kindof just whiny, but this really is getting ridiculous.


That would not make good business sense. This is a commercial for-profit blog above all. More pageviews, hits and ad impressions generate revenue to keep it going. Otherwise, it just won't survive. Not worth complaining about a few extra clicks to obtain free content.
Score: 11 Votes (Like | Disagree)

bonaccij
No, Just hard to see on Black

They are both identical. The sensor is just harder to see on the black one. The Camera hole is an actual cut out... it appears on the left on both screens.
Score: 10 Votes (Like | Disagree)
Read All Comments