Back in late May, a single photo of an alleged rear shell from the iPhone 6 surfaced, showing what appeared to be a thin metal part with cutouts on the rear for not only the camera, microphone, and flash, but also the iconic Apple logo.

A new photo set shared by Nowhereelse.fr [Google Translate] now shows a similar part from various angles, with its apparent high quality bolstering speculation that this may indeed be a genuine iPhone 6 shell. 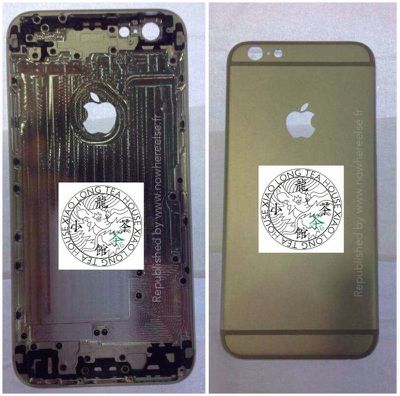 Interior (left) and exterior (right) of alleged iPhone 6 rear shell
Side views of the shell show the now familiar cutouts expected for the iPhone 6, including the standard mute switch and elongated volume buttons along the left side. The right side features a SIM tray toward the middle and what has been reported to be a relocated power button, with Apple perhaps moving the button from the top edge to the side to make it more accessible on the larger device.

Left and right sides of alleged iPhone 6 rear shell
The report mentions that the cutout for the Apple logo points to the possibility of a lighted logo that could be used for notifications, but we believe this to be unlikely. Shell cutouts for the Apple logo are not uncommon for iOS devices, although they have not been seen on the iPhone before. But for iPad models, Apple has traditionally preferred to use a shell cutout with an embedded Apple logo rather than printing the Apple logo on the shell, in some cases such as in the original iPad placing antennas in the region to help overcome the shielding effects of the metal casing.

For the iPad mini, the Apple logo was printed on the first-generation models, but for the current generation the company has shifted to an embedded logo. As a result, we expect an embedded iPhone 6 logo to similarly be for aesthetic or perhaps antenna reasons rather than for illuminating the logo itself.

The iPhone 6 is expected to debut around the September timeframe, perhaps initially with the rumored 4.7-inch model while an even larger 5.5-inch model arrives up to several months later. Apple should also be releasing iOS 8 to the public at around the same time based on past patterns, and Apple's iWatch is tentatively targeted for an October unveiling.

Sky Blue
after all the excitement of wwdc, back to iPhone rear shells and mockups for 3 months!
Score: 44 Votes (Like | Disagree)

Jamiet361
Is it just me that thinks that the back would look much better without those breaks?
Score: 34 Votes (Like | Disagree)

AngerDanger
It's nice to know that the next iPhone will come in its own ugly case, so you don't have to buy one. :p

The :apple: logo looks small to me.

Dude, do you know anything about growing apples? By the time it's released, those apples will be bigger and ripe!

Lapidus
I think it's a big watch.
Score: 25 Votes (Like | Disagree)

seble
wow the thickness of those separators on the back, ugly... Apart from that looks nice ;)

Please, just please, give me one thing.


Give me a power button on the side. I don't care if it's 4.7in or if its made of paper, I just want a side power button.

FuNGi
I don't understand why the antennae breaks are visible as a unique material on the outside but the inside looks like solid metal.
Score: 22 Votes (Like | Disagree)
Read All Comments