At today's Google I/O event in San Francisco, Google demoed its Android Wear platform and announced availability of the first Android Wear devices. First announced in March, Android Wear is designed to bring the Android platform to a range of wearable devices from several of Google's manufacturing partners. 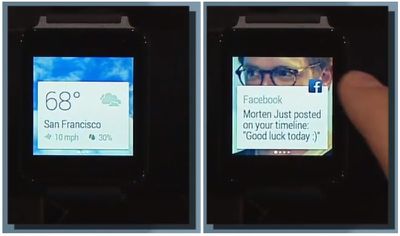 As described on stage, Google has designed Android Wear with many of the features and functions that rumors have suggested Apple's own iWatch might include. Android Wear supports screens of multiple sizes and styles, including both square and circular. With its always-on display and card-based UI, it displays information like notifications and location-based reminders.

Largely controlled by voice via Google Now integration, Android Wear also supports contextual apps that display information at a glance and it also integrates with several sensors, such as those that monitor steps taken and even heart rate on supported devices. It includes Google Maps support, offering turn-by-turn directions on the wrist and it can be used to control other devices, such as speakers.

On stage, demonstrations of Android Wear gave a clear idea of what we might expect from other wearables in the future, including the iWatch. A Lyft car was ordered via a simple voice command, with the watch automatically detecting a location. Ordering the car, payment, and update notifications on the driver's location were all displayed directly on wrist, without the need to access a smartphone.

Samsung Gear Live
Google announced the release of the full Android Wear SDK, along with the launch of the first devices supporting Android Wear. The LG G Watch is available for order today, as is the Samsung Gear Live, a new Samsung watch that supports Android. The platform's first circular watch taking advantage of the round UI, the Moto 360, will be available later this summer, and additional devices are in development by various partners.

By focusing on a platform rather than a device of its own, Google has managed to get Android onto wrists several months ahead of Apple. According to the most recent rumors, Apple's much-rumored smart watch won't launch until later this year, possibly at an October event. The iWatch expected to have a strong focus on health and fitness, with more than ten sensors to collect various types of data.

Frankied22
After watching the demo in I/O this is exactly what I hope the iWatch is not. I don't want a clunky 2.5" laggy touchscreen bombarding me with notifications and trying to shoehorn the smart watch experience onto a small screen.
Score: 53 Votes (Like | Disagree)

Been watching the Google I/O - They really have excelled themselves this year.

I hate to say it, but after watching the I/O, it makes it appear Apple take 1 step forward but then take 3 steps back.

Half the demos didnt work, lag in demos, flickering in videos, etc

The smoothest part was when they demoed something in iPhone 5 lel.
Score: 33 Votes (Like | Disagree)

Dave.UK
Been watching the Google I/O - They really have excelled themselves this year.

I hate to say it, but after watching the I/O, it makes it appear Apple take 1 step forward but then take 3 steps back.
Score: 29 Votes (Like | Disagree)

Cali Fornia
I am not hating, but this looks incredibly useless.
Those few sensors are also very limited in functionality.

I especially like how they always show pictures of such watches with unrealisticly short sentences displayed  just to make the UI look good and hide the scrolling necessity. I'll just tell my friends now to only message me 3 word sentences on facebook for maximum convenience!
Score: 22 Votes (Like | Disagree)

Been watching the Google I/O - They really have excelled themselves this year.

I hate to say it, but after watching the I/O, it makes it appear Apple take 1 step forward but 3 steps back.


Looks like a solid presentation from Google, but I don't see how it exceeds Apple's WWDC. Google shows a lot more things at earlier stages of development- which makes it look like they're "doing more".
Score: 19 Votes (Like | Disagree)
Read All Comments