Alongside the second iOS 8 beta released earlier today, Apple also released a new version of the Apple TV software. The two updates appear to have laid the groundwork for Family Sharing, as there's a new section for "Family Purchases" in the iOS App Store's Purchased tab and a new iCloud Family setting for the Apple TV.

As noted by 9to5Mac, Family Sharing on the Apple TV (and on the App Store) is not yet functional, but as described by Apple during the Worldwide Developers Conference, it allows users to share purchased content across accounts. 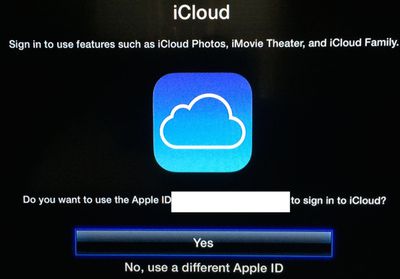 Image courtesy of 9to5Mac
Families of up to six people with iTunes accounts that use the same credit card can share content like apps, iBooks, music, movies, and more, across all of their devices using iCloud. Family Sharing also lets families share photos, videos, a calendar, reminders, and more, to keep everyone in the family connected.

On the Apple TV, it is likely Family Sharing will let users access TV shows, movies, and music that has been downloaded by family members.

Though it is not yet available, Family Sharing will be implemented before OS X Yosemite and iOS 8 are released to the public this fall.

Sol
I just wish that the Apple TV hardware upgrade would come out already. I held out from buying the 2nd and 3rd gen for so long that I expect a new model to get announced the moment that I purchase either of them.
Score: 6 Votes (Like | Disagree)

According to that screenshot Family Sharing is now called iCloud Family?

I'm starting to see what Apple meant when they said iCloud was the centre of their strategy for the next 10 years. It makes perfect sense now: its not a technology strategy, its a sales strategy. iCloud features demand the latest OS on all devices. Dropbox doesn't, Google Drive doesn't but iCloud only works if you are completely current on every device. If you fall behind, your access is cut. Why's that? So they can hold your data and services for ransom if you don't have modern hardware.

How many people lost sync services when Mobile Me got 'upgraded' and their hardware wasn't new enough. How many lost sync access when iWork got that upgrade/downgrade fiasco. How many lost Aperture with the non-backwards-compatible mandatory update. We'll lose home sharing next. Then our photo roll. All these free updates and services aren't the free handout they appear to be. iCloud as a service has no need whatsoever to be so demanding on the currency of your hardware and OS. This is all a big scheme.
Score: 5 Votes (Like | Disagree)

iCloud as a service has no need whatsoever to be so demanding on the currency of your hardware and OS. This is all a big scheme.


Your complains about being pushed to the latest and news are certainly valid (if nothing new in the world of Apple), but you're mistaken about this one.

Adding new features to a service integrated with software always requires new software. You don't get new Dropbox features without updating the software, either. And at some point, support is going to be dropped. For example, Dropbox shut down V1 of their mobile API recently, leaving a lot of unupdateable apps (on older devices) unable to sync.

Apple could certainly backport support for this new feature to older OS versions, but as a software engineer I can tell you there is significant effort involved in maintaining multiple active development branches. No matter your resources, it will slow you down. So much for "no need".
Score: 4 Votes (Like | Disagree)


I suspect this is a maintenance release, to add in stuff that Yosemite compels them to add. They don't want any major element of their ecosystem to not be compatible.

Odds are, there's going to be a big hardware upgrade, and with that, a big OS upgrade. Can't come soon enough. I wish there was a "default to Netflix" setting on my Apple TV.
Score: 4 Votes (Like | Disagree)

I just wish that the Apple TV hardware upgrade would come out already. I held out from buying the 2nd and 3rd gen for so long that I expect a new model to get announced the moment that I purchase either of them.


Well for heavens sake, go buy one so the rest of us can get the new one. It sounds like Apple is just waiting on you. :)
Score: 3 Votes (Like | Disagree)

I just wish that the Apple TV hardware upgrade would come out already. I held out from buying the 2nd and 3rd gen for so long that I expect a new model to get announced the moment that I purchase either of them.


Sol, PLEASE BUY ONE. That way everyone will soon benefit from a new release. :)
Score: 2 Votes (Like | Disagree)
Read All Comments