Apple today released the second beta of iOS 8, which brings a number of improvements, changes, and bug fixes to the beta software that was introduced on June 2.

iOS 8 beta 2 also includes several minor interface tweaks and modifications that make the beta feel both faster and more polished. We've gathered a list of the enhancements that have been bundled into the release below.

Podcasts: Following iOS 8 beta 2, the Podcasts app is a default iOS app that comes pre-installed on iOS devices. This means it can no longer be deleted. 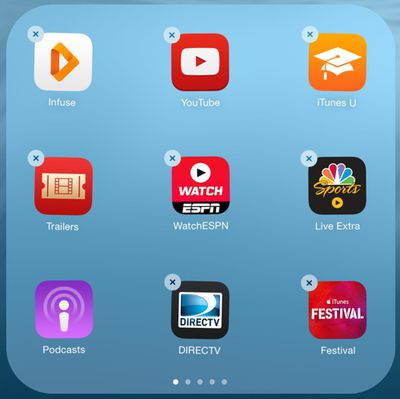 Safari: According to the release notes, Safari will now block ads from automatically redirecting to the App Store without user interaction. Safari also includes a new pinch to tab view.

App Store Purchases: Apps in the App Store's purchased tab are once again sorted by purchase date. In iOS 8 beta 1, they were sorted alphabetically. It's also possible to leave reviews in the App Store again, a feature unavailable in beta 1 due to a bug, and the App Store now displays Family Purchases.

Brightness: In beta 1, the Brightness toggle in the Settings menu under Wallpaper and Brightness was broken. It is now functional again.

Messages: Icons for the camera and the microphone in Messages are now gray rather than blue and there's a new setting to mark all messages read.

Settings: There's a new "Raise to Listen" setting for Messages.

Notifications: There's a new "Allow Notifications" setting available for each app, which works as a sort of global mute to let users to mute notifications from an app on an individual basis. Previously, there was only an option to disallow apps from showing notifications in Notification Center.

Handoff: According to several of our forum members, Handoff between iOS 8 and OS X Yosemite is now far more functional.

Additional features in iOS 8 beta 2 will be added here as they are discovered. Apple is likely to continue pushing regular updates to iOS 8, bringing minor performance boosts and changes ahead of the operating system's public release, which is expected to come in the fall. For more information on iOS 8's features, big and small, make sure to check out our roundups.

rorschach
Another default app that can't be deleted. Hurray!
Score: 34 Votes (Like | Disagree)

nepalisherpa
Ugh...more pre-installed apps! Just make them Appstore apps. Not only will you allow users to have a choice but you can also update these apps without pushing out a system update.
Score: 23 Votes (Like | Disagree)

Great new features, but we need apps to crash less.


Considering 3rd party apps need to be updated by, uh, the 3rd parties, I'm sure Apple will get right on that. :rolleyes:
Score: 16 Votes (Like | Disagree)

Yea are you new to iOS?


He is saying it because of newsstand inability to be hidden before iOS 7. Maybe you are the one "new" to iOS. :p
Score: 10 Votes (Like | Disagree)

Unbelievable. This is the final straw. I'm switching to Android. I can't understand why Apple feels it needs to force such a stupid app on to everyone. Podcasts is such an integral experience to iOS that it needs to be a stock app? Really? Who listens to podcasts? Nobody cares. Just like Health, Newsstand, Stocks, Compass, Phone, iMessage, Maps, Passbook, Reminders, FaceTime, Safari, iBooks. No. One. Cares, Cupertino. Just amazes me why they can't put in actual useful features.

AngerDanger
You've gotta love how the thumbnail view of the photo stream looks like a corrupt analog broadcast.

Can the Podcast app be put in a folder at least?

Ah, I see you use the 'comment first, look at article later' strategy. ;)
Score: 8 Votes (Like | Disagree)
Read All Comments