Tuesday November 26, 2013 6:57 am PST by Eric Slivka
Supplies of the iPhone 5s have been steadily improving since the device's launch two months ago, and according to a new survey by Piper Jaffray analyst Gene Munster, supplies are now approaching demand levels at Apple's U.S. retail stores with 90% of model/location combinations currently showing as available. Munster's survey is a weekly tracker of 60 U.S. stores and has seen significant improvement in iPhone 5s availability from just 31% two weeks ago and a paltry 10% back in early October. 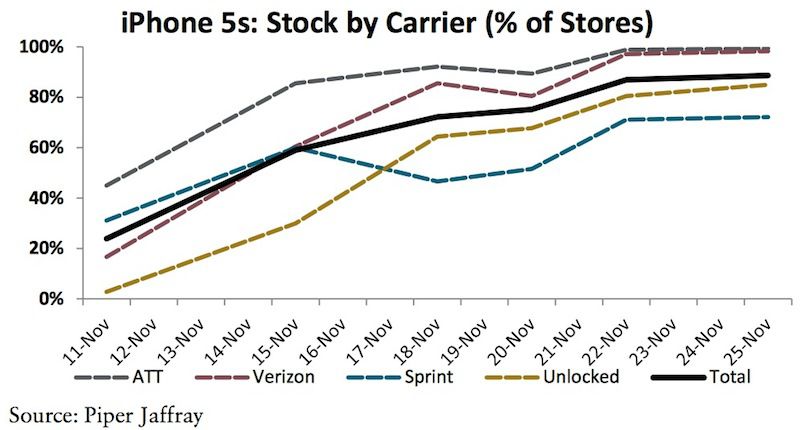 Total available iPhone 5s SKUs (excluding unlocked) have increased to 90% from 31% two weeks ago, and 10% at the beginning of October. Separately, we note that the lightest stocked store we checked had 67% of available SKUs. We view the improvement in supply as an encouraging sign that Apple has begun to catch up to demand. We continue to believe that Apple will reach supply-demand equilibrium by early December.

While overall iPhone 5s availability of 90% slightly lags that of the iPhone 5 at 95% at this time last year, Munster notes that supplies of the iPhone 5s actually better reflect the current popularity mix of the various carriers, with AT&T and Verizon models seeing almost universal availability and only the less popular Sprint models lagging. 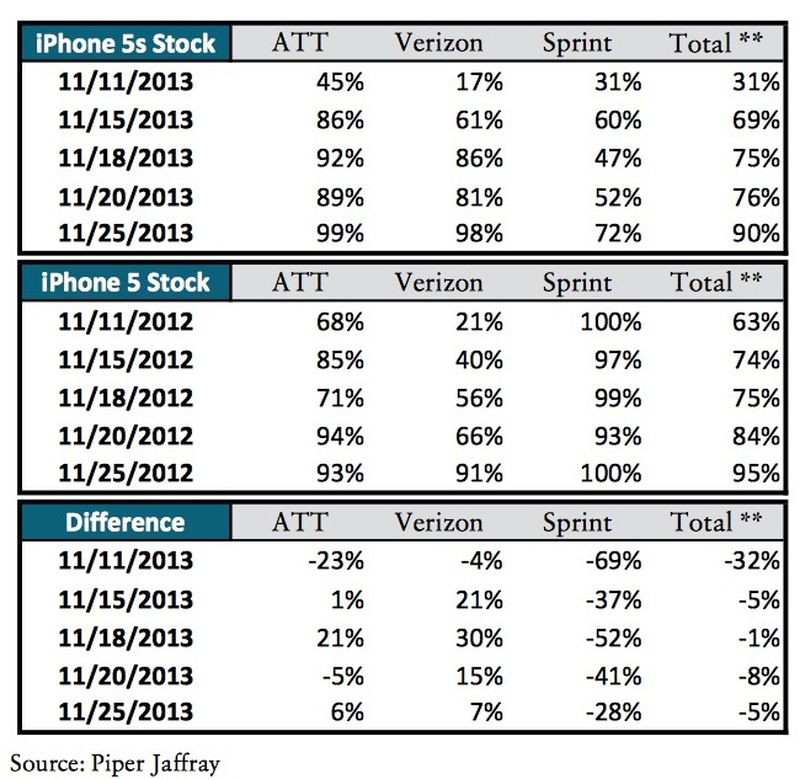 Munster's tracker currently omits the just-launched unlocked SIM-free models, as those devices are still showing 1-2 week shipping time and in-store availability is not shared through Apple's online store for those models. Munster appears to have been considering the unsubsidized T-Mobile models as representative of the broader category of unlocked for tracking purposes, as users have found that many of the carrier-specific iPhone 5s models are in fact already unlocked.

jaijaibinx
My brain is telling me I might as well wait for the next one... but my soul is still longing for one of these badboys...
Rating: 2 Votes

Can't believe it took over two months since release to actually stabilize supply/demand. Too long imo.


It's a success story. So many consumers want to get their hands on the latest cutting edge technology from Apple it's literally impossible to meet demand for months. The problem stretches out further and further with each product launch as more and more people discover how incredible these products are, and have a great desire to upgrade to the latest and greatest.

We should all feel good about being on the winning team.
Rating: 2 Votes