Apple today updated its U.S. online store to begin offering sales of unlocked, SIM-free iPhone 5s models, with shipping estimates currently set at 1-2 weeks compared to 3-5 business days for carrier-specific purchases (via 9to5Mac). Pricing is the same as for other unsubsidized iPhone 5s models, with the 16/32/64 GB models available for $649/$749/$849 respectively. 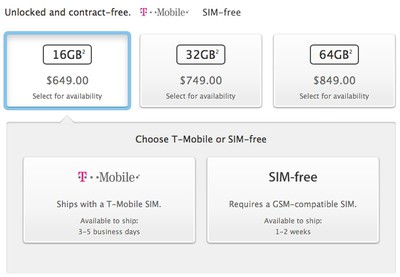 While the launch brings official unlocked device sales to Apple's stores for the first time, many of the carrier-specific models sold by Apple have been unlocked all along when purchased at full retail price. For example, the T-Mobile iPhone 5s models sold by Apple have been unlocked since launch, although the company has not been specifically marketing them as such. There had been some early confusion about the issue, as Apple initially listed some iPhone 5s models as unlocked leading up to the launch, but the company removed that text at launch time.

With today's addition, the company is now more clear about offering unlocked models without the need for any SIM card to be included at the time of purchase, with the models available for use on a number of carriers around the world.

As Apple notes on the store page, unlocked iPhone 5s devices are model are A1533 and are compatible only with GSM networks.

iwbyte
A word of warning: If you get a SPRINT phone, and later want to unlock it for use on AT&T or T-Mobile domestically, they WILL NOT unlock it for you regardless of if you are still under 2 year contract or not.

What's more, if you get an unlocked phone and then bring it to Sprint for their network, you are now PERMANENTLY locked to Sprint and CANNOT get it unlocked for AT&T/T-Mobile.

They will unlock it for INTERNATIONAL use, but not domestic use.
Score: 4 Votes (Like | Disagree)

talmy
I bought the T-Mobile 5s at launch. Even though I use it on T-Mobile it did not come with the certificate necessary to set it up on-line, but it did come with a T-Mobile SIM. It was a hassle to get set up.

I don't see why anyone would buy the "SIM-Free" version with the extra wait when they could just buy the T-Mobile version and toss the SIM.
Score: 4 Votes (Like | Disagree)

Just thinking the same thing. Here in the UK we could also get sim free on release day.


My guess is that since unsubsidized phones are such a small part of the US market, they waited until supplies stabilized before offering them rather than divert manufacturing capacity away from the more popular subsidized models.
Score: 4 Votes (Like | Disagree)

LFMNX
Isn't it simply incredible how expensive this stuff is?
Score: 3 Votes (Like | Disagree)

The Verizon version is even better (unlocked and works on Verizon, AT&T, T-Mobile too). And it ships immediately (with free 2 day Fedex).

Well, that AT&T iPhones are not SIM unlocked.

The Verizon iPhones are unlocked because they're required to be as a result of the 700mhz spectrum they bought.

The TMobile ones you buy from Apple are unlocked because you're paying full price for them to begin with.

Read what I said. If you purchase from Apple retail store "device only" the AT&T version is unlocked.

Verizon, AT&T or T-Mobile device only full priced from Apple retail or website are unlocked. Always have been. Always will be.
Score: 2 Votes (Like | Disagree)
Read All Comments