Apple is set to reveal its revamped fifth-generation iPad later this month, and ahead of the event, new high-resolution images of the upcoming iPad’s casing and front panel have been released by Australian writer Sonny Dickson, offering a clear view of what can be expected from the redesign.

Though the iPad’s components have been shown off in multiple photos and videos, these high-quality images provide a better look at the slimmer, mini-style iPad 5. 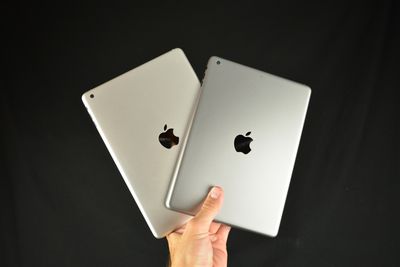 The fifth-generation iPad has been designed to look similar to the iPad mini, adopting smaller side bezels that cut a significant amount of bulk from the tablet. As a result, it is thinner, lighter, and smaller in size than the existing fourth-generation iPad.

Apple’s newest iPad is expected to include a new 64-bit processor from the A7 family introduced in the iPhone 5s, and it may also include an improved 8-megapixel camera. There has been speculation that the company could include the Touch ID fingerprint sensor that debuted with the iPhone 5s on both its revamped iPad and iPad mini, but thus far, there have been no physical signs of the feature.

As depicted in the photos, the iPad will be offered in both silver/white and black/space gray. Space gray, introduced alongside the iPhone 5s, is a lighter color that replaces the existing slate color. While it is possible that Apple will also offer the fifth-generation iPad in gold, there have thus far been no confirmed part leaks depicting the color.

Apple is expected to unveil both the fifth-generation iPad and the second-generation iPad mini during an October 22 event that will also showcase other Apple products such as Mavericks and the Mac Pro.

Unless you use your iPad nude the colour of it means nothing.


I don't think one's state of dress is related to what case one might have on an ipad.
Score: 12 Votes (Like | Disagree)

macchiato2009
the new size is not a surprise

what matters is: how much weight did the iPad lose ???
Score: 9 Votes (Like | Disagree)

3N16MA
Apple needs to offer Silver/Black. Take me back to the original iPad.
Score: 5 Votes (Like | Disagree)

SvenSvenson
What? There's a new iPad coming out?
Score: 5 Votes (Like | Disagree)

Oh yeah, its the money burning a hole in my pocket!!!
Score: 5 Votes (Like | Disagree)
Read All Comments