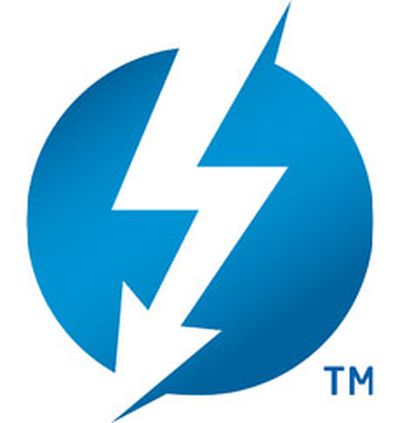 Intel announced the next generation of Thunderbolt, codenamed "Falcon Ridge," back in April, but today the company shared some a few additional details about the upcoming release.

As previously announced, Falcon Ridge, now officially dubbed Thunderbolt 2, supports up to 20Gbps bi-directionally, doubling the bandwidth of the original Thunderbolt. The new version of Thunderbolt will support both DisplayPort 1.2 and 4K video.

Named "Thunderbolt™ 2", this next generation of the technology enables 4K video file transfer and display simultaneously – that's a lot of eye-popping video and data capability. It is achieved by combining the two previously independent 10Gbs channels into one 20Gbs bi-directional channel that supports data and/or display.

Current versions of Thunderbolt, although faster than other PC I/O technologies on the market today, are limited to an individual 10Gbs channel each for both data and display, less than the required bandwidth for 4K video transfer. Also, the addition of DisplayPort 1.2 support in Thunderbolt 2 enables video streaming to a single 4K video monitor or dual QHD monitors.

Thunderbolt 2 is backwards compatible with current generation cables and connectors, so existing hardware will continue to function with the updated controller. Intel expects Thunderbolt 2 to begin production before the end of the year, ramping up into 2014.

Nicky G
For some people's edification

I feel it's important to mention, in such threads...

Thunderbolt is really mostly oriented at pro users. If you don't use it, big whoop. Most people don't use a fraction of the power their computers offer. For the folks who need it, it's a Good Thing, and not "overpriced," in that Thunderbolt peripherals are actually pretty reasonably priced, compared with PCIe alternatives.

Used to be a day, people really liked the fact that Macs were a "Pro" platform. I guess now that Apple is all hip and trendy, people just want to moan about everything. And ironically, the casual users moan about Thunderbolt being there, and the "Pros" moan about the platform not being "Pro" enough.

iMikeT
How about better support for and making Thunderbolt 1 more widespread before announcing Thunderbolt 2 Intel?
Score: 17 Votes (Like | Disagree)

Millah
Hmm, they even dropped the gloss from the lightning logo ;)
Score: 13 Votes (Like | Disagree)

3282868
It's embarrassing that the top line professional system, the Mac Pro, doesn't have Thunderbolt while the entire line currently does. If there is a Mac Pro refresh announced this month, it better include Thunderbolt along with the hints at a return to the pro-market.
Score: 11 Votes (Like | Disagree)

If you're a "pro user" you aren't using desktop attached storage.

And if you're solely using thunderbolt for secondary or tertiary displays, who cares?

This problem was already solved decades ago. So what, you only one cable, who CARES?

I do.
Score: 8 Votes (Like | Disagree)
Read All Comments