With shipping estimates for new pre-orders of the iPhone 5 through Apple's online store slipping to two weeks just an hour after pre-orders began earlier today, customers are also snapping up Apple's supplies of Lightning adapters and cables.

Alongside the iPhone 5 announcement on Wednesday, Apple introduced a pair of adapters to allow users to continue using older cables and accessories based on the long-standing 30-pin dock standard: a $29 direct plug adapter and a $39 short-cable adapter. 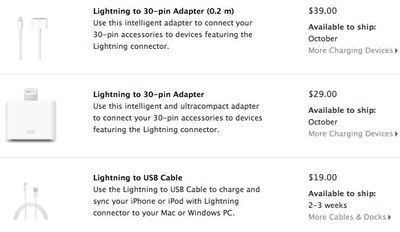 Availability of the new adapters has already begun to slip significantly, with Apple now quoting shipping estimates of "October" for new orders through its online store. The company's $19 Lightning to USB cable, which comes standard with Apple's latest devices but which should be popular as a standalone purchase with customers wanting to set up multiple charging locations, has also slipped from 1-3 business days to 2-3 weeks.

Apple has also acknowledged that it will be launching HDMI and VGA cables for Lightning-equipped devices, but the company has not yet made them available for order.

Update: A number of readers have noted that the adapters have been listed as shipping in October since they first showed up in Apple's online store on Wednesday. Shipping estimates on the USB cable have, however, indeed slipped.

andalusia
This just shows how easy it is for Apple to make money, even at ridiculous prices. They are very, very clever.
Score: 19 Votes (Like | Disagree)

daneoni
Should be including these for free...especially the adapter. Why can't they just be nice to their customers once a while.

I read an estimate that these things alone will fetch Apple north of $100m in profit.
Score: 18 Votes (Like | Disagree)

iReality85
I think this is completely unreasonable. $29 for a compact adapter, and $39 for the wired version? I understand that Apple wanted to update the ten year old connector, but to not even include a compact adapter along with the iPhone 5? This is borderline gouging, and to make it worse its forced gouging. There's going to be a lot of unhappy customers. Keep in mind- most Apple users aren't geeks; they don't post on these forums and don't watch the events. They are literally going to buy the iPhone 5, open it, and go, "it has a new connector? I can't plug it into all my accessories? I can't use my sound dock anymore at work? Not in my car?" The right thing for Apple to do would be to include a compact adapter with the iPhone 5 (at the very least, or even just for the first few months). I mean, it's bad enough that Lightning doesn't support video-out, or even guaranteed to work with some sound docks, so customers will need an adapter for that too.
Score: 14 Votes (Like | Disagree)

This just shows how easy it is for Apple to make money. They are very, very clever.

DMVillain
They were never available immediately, even after the keynote it said October.
Score: 11 Votes (Like | Disagree)

thatisme
I believe they should have included (1) of the adapters with each of the new phones. I know they will make more by selling them, but there is a certain amount of good will that they would have generated and they could have lessened the harsh feelings people have toward the overpriced cables.

It'll be interesting to see if they do a bit of price adjusting later on, or if they will continue to sell enough of these at the current price points. And, I wonder how quickly the 3rd party guys like monoprice will make Lightning cables and adapters available.
Score: 10 Votes (Like | Disagree)
Read All Comments