Renowned Apple journalist Jim Dalrymple -- known for his "Yep" confirmations to Apple rumors -- has posted a cryptic message suggesting that Apple will hold two separate media events this fall for the new iPhone and iPad mini. 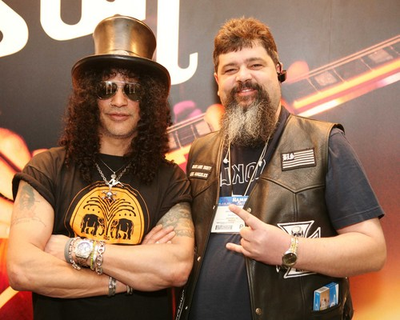 Jim Dalrymple (right) with rock guitarist Slash
The message was written in response to a theory postulated by John Gruber of Daring Fireball, saying that he is a "smart fellow" for this post:

I’m thinking it makes more sense for Apple to hold two events. First, an iPhone event, focused solely on the new iPhone and iOS 6. Then, the iPhone ships nine days later, and there’s another wave of iPhone-focused attention as the reviews come out. Then, in the first or second week of October, Apple holds its traditional “music event”, exactly along the lines of the events at which they’ve been debuting new iPods for the last decade.

It has previously been all but confirmed that Apple will hold a media event on September 12th to announce a new product, initially presumed to be the next-generation iPhone and an iPad Mini. With Dalrymple's track record, however, it seems possible that the new iPhone will come first and a smaller iPad will be announced later in the fall at a separate event.

Thanks for clearing that one up! :D
Score: 54 Votes (Like | Disagree)

GBrooks
I got distracted by Slash, wut?
Score: 39 Votes (Like | Disagree)


And when it is released will you cancel your account forever so we don't have to read anymore of your nonsense?
Score: 32 Votes (Like | Disagree)

If your definition of a "dumb idea" is a product that will sell in astounding numbers and be enjoyed by millions, I'd say you're spot-on in your analysis!
Score: 23 Votes (Like | Disagree)

freedevil
That so cryptic how did macrumors crack his sayings? :)
Score: 14 Votes (Like | Disagree)


So if you're right, you'll gain some bragging rights. If you're totally wrong, youll lose nothing. What is your point? Do or say something that'll cost you. Otherwise it's just empty words.
Score: 12 Votes (Like | Disagree)
Read All Comments

Thursday May 13, 2021 12:10 am PDT by Sami Fathi
Apple has fired Antonio García Martínez, an ex-Facebook product manager and author of the controversial book "Chaos Monkeys," following public and internal calls for removal and investigation due to past misogynistic statements, The Verge reports. Apple hired Martínez earlier this week to join its ads team, however, comments that Martínez made in the past sparked condemnation from users...
Read Full Article • 314 comments