The dispute between Apple and Samsung continues to play out in U.S. court, with Apple working its way through its list of witnesses as it seeks to convince a jury that Samsung has infringed upon patents and designs related to the iPhone and iPad.

Among the interesting developments yesterday was the admission into evidence of an internal Samsung memo acknowledging that the company had suffered a "crisis of design" after the introduction of the iPhone, with Apple's lawyers arguing that the memo is evidence of Samsung's strategy to shift gears and copy the iPhone's design. AllThingsD has more on the memo:

It’s a memo that Samsung didn’t want admitted into the trial, and until now had kept it out. But this morning, when Samsung legal counsel John Quinn mentioned the “crisis of design” moment in a question to Samsung strategist Justin Denison, all bets were off, and the memo was in.

“Influential figures outside the company come across the iPhone, and they point out that ‘Samsung is dozing off.’ All this time we’ve been paying all our attention to Nokia, and concentrated our efforts on things like Folder, Bar, Slide,” Shin wrote. “Yet when our UX is compared to the unexpected competitor Apple’s iPhone, the difference is truly that of Heaven and Earth. It’s a crisis of design.”

Today has seen early Apple designer Susan Kare on the stand testifying based on her expertise in user interface and icon design. The Verge is providing live updates on Kare's testimony in which she is expressing her belief that Samsung's products and user interfaces are confusingly similar to the iPhone. In support of her testimony, Kare notes that even she was confused during a pre-trial meeting about her role as an expert witness in the case, mistakenly picking up a Samsung phone when she was attempting to reach for an iPhone.

It is my opinion that the overall collection of graphic features that makes the overall visual impression could be confusing for a consumer. Partly I base that on my visual analysis. Partly, I remember when I was at the law firm about being a expert witness in this case there was a big conference table with many phones on it... I could see the screen and went to pick up the iPhone to make a point about the UI graphics, and I was holding a Samsung phone. I usually think of myself as someone who is pretty granular about looking at graphics, and I mistook one for the other. So, I guess in addition to my formal analysis I had the experience of being confused.

Cross-examination of Kare has primarily focused on walking through granular details of differences between Apple's and Samsung's icons, where Kare has admitted some differences. Samsung followed a similar tactic with Apple's previous expert witness in industrial design, Peter Bressler, with Apple's witnesses acknowledging some differences between Apple's and Samsung's products but emphasizing their belief in the overall impression being similar enough to cause consumer confusion.

As Apple moves through its witness list that was headlined last week by Phil Schiller and Scott Forstall, Samsung will be preparing to bring its own experts in to provide testimony arguing against Apple's claims that Samsung copied Apple's designs and intellectual property. Samsung has repeatedly tried to call into question Apple's claims that Samsung did not shift to its current design aesthetic until after the introduction of the iPhone, and will certainly seek to press that point as the case continues.

So samsung decided to simply mimic the iPhone icons too. 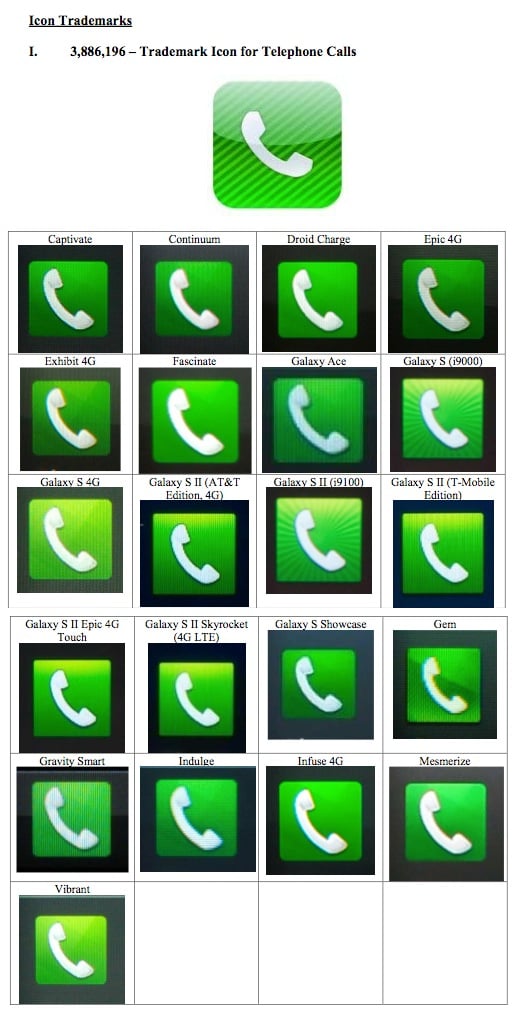 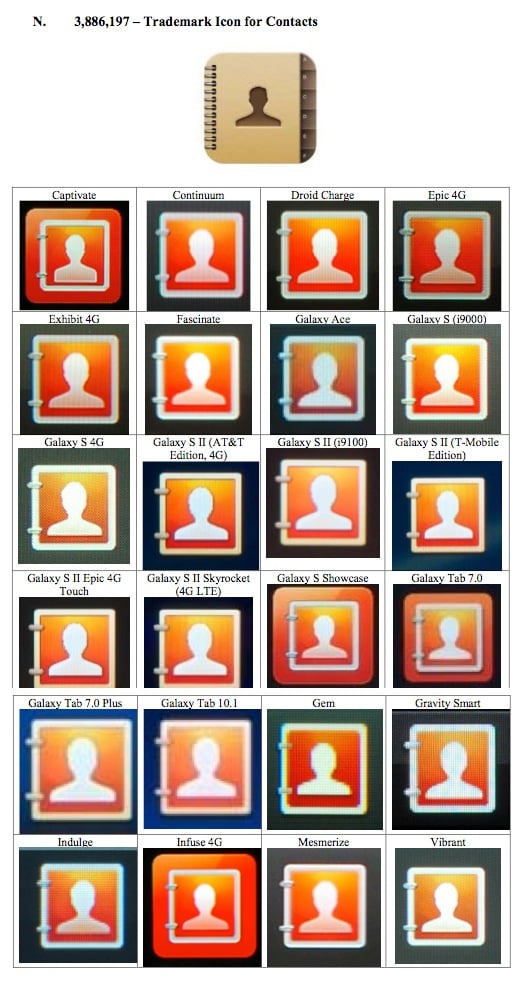 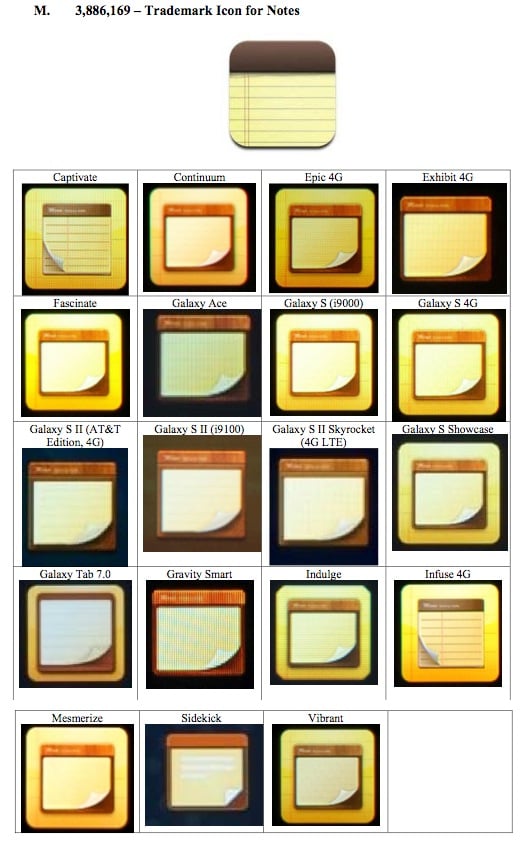 
If you can't see the obvious difference then just wow.
Score: 29 Votes (Like | Disagree)

My guess is the Fandroids will find a way to discount Samsung's own admissions.

It's already gone on record that "crisis of design" is a common phrase over at Samsung. So it in itself is not damning.

And the icons which were posted here are a ridiculous proof point. The green phone icon has long been the icon of choice way before the iPhone. And in a very similar way.

How many ways can you show an address book? Notepad?

Yes, of course Sam, and the only way to represent music is with a pair of blue or purple eighth notes overlaid on the image of a CD. :rolleyes:

sbrhwkp3
If Samsung isn't guilty of patent infringement, they're definitely guilty of not going very far out of their way to be different. :apple:
Score: 24 Votes (Like | Disagree)

Uncle David
My guess is the Fandroids will find a way to discount Samsung's own admissions.
Score: 19 Votes (Like | Disagree)


Um, I think you need to turn your computer display on. You obviously can't see what you're posting.
Score: 18 Votes (Like | Disagree)
Read All Comments