Last week, Primate Labs summarized its Geekbench 2 database results for Apple's new MacBook Air and 15-inch MacBook Pro models, but did not address the 13-inch MacBook Pro as not enough data had been collected at that time.

But over the past week more data has come in, and the firm now shares its results which show the new 13-inch models are yielding approximately 10-15% higher Geekbench 2 scores than both the corresponding previous-generation 13-inch MacBook Pro models as well as the current 13-inch MacBook Air models against which they are directly competing. 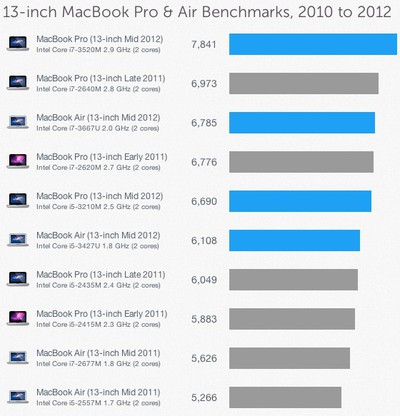 The popular Geekbench tool also provides a glimpse into the relative popularity of various models, and with the 13-inch MacBook Pro and MacBook Air coming in at the same base price points at both low and high ends, the frequency with which those machines appear provides an interesting perspective on how customers are deciding between the two lines.

junkster
Here's the thing: performance benchmarks for laptops no longer matter. Or at least there's absolutely no reason to benchmark laptops that get super hot and loud when you take advantage of all the processing power that's available.

Remember, people were returning the high-end 2011 MacBook Pro because of heat and fan noise issues, exchanging it for the lower specced model (e.g., http://www.marco.org/2011/09/20/heat-and-fan-issues-with-2011-15-inch-macbook-pro).

Whenever benchmarks like these get posted, there should be a decibel level, ambient temperature, and battery life estimate that goes alongside them.
Score: 17 Votes (Like | Disagree)


Apple doesn't realize a laptop will NEVER be able to keep up with a real Pro machine...


Idiotic sentence of the day.
Score: 10 Votes (Like | Disagree)

TheMacBookPro
This just in: new computer is better than old computer!
Score: 10 Votes (Like | Disagree)

Glad to see that new technology is faster by the exact margin everyone predicted it would be long before Ivy Bridge Macbook Pros were released.

Can't wait to see the benchmarks for the "NEW" MacPro.