Several readers have noticed that Universal Studios' movies are now available for re-download through Apple's iCloud service. In March we reported that both Fox and Universal were not yet participating in iCloud video streaming due to contractual obligations with HBO. HBO was reportedly working with both Fox and Universal to loosen these restrictions.

HBO agreed to loosen its arrangement with Warner Bros., which is working with iCloud, and also is in talks with Universal and Fox to do the same, the spokesman added.

When searching for movies in iTunes, Universal movies no longer contain a warning that the movies are not available through iCloud, while Fox's movies retain the warning: 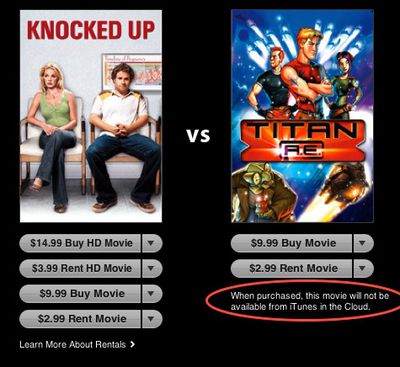 Universal Studios (left) vs 20th Century Fox (right)
Another reader was able to confirm he was able to re-download 40 Year Old Virgin. Previous movie purchases from Universal should now be available for redownload in your previous purchased menu on iTunes.

Fox is also said to be in negotiations with expectations that their movies would also become available through iCloud in the near future.

Forget it, no way. I won't buy any movie in iCloud. I buy the movie and 2 years from now when Apple and a movie studio start bickering, the studio pulls the movie from iCloud and I get screwed.

not sure you understand how iCloud works.

You buy the movie, it gets downloaded to your device/machine.
If you later want to redownload it you can in iCloud (if available).


You can. go to itunes preferences and change it to 1080p and redownload.
Score: 9 Votes (Like | Disagree)

lordofthereef
The prices of these movies is preposterous, IMO. A lot of this stuff can be had for so much cheaper on bluray. I don't think I have paid more than an average of about $15 per film (Disney Films excluded). If this was more affordable and licensing wasn't as stupid as it is, I would certainly be more open to the idea of going all digital.
Score: 6 Votes (Like | Disagree)

I still can't believe the prices. I can get Bluray versions of several of these movies for $10 or less and I can rent them as part of Blockbuster or Netflix. Why are they so expensive? I have never bought or rented from iTunes store for that reason. Plus I am spoiled by the lossless audio on the Bluray movies.
Score: 5 Votes (Like | Disagree)

Forget it, no way. I won't buy any movie in iCloud. I buy the movie and 2 years from now when Apple and a movie studio start bickering, the studio pulls the movie from iCloud and I get screwed.

Well, you could always save a copy of all purchased iTunes content locally. I'm sure you backup your critical data just in case "two years from now you might have a hard drive failure". I don't see any difference.
Score: 4 Votes (Like | Disagree)
Read All Comments