The Associated Press reports on a new initiative from the U.S. government to help push schools and textbook companies make the transition to digital textbooks over the next five years. With Apple pushing itself to the forefront of the digital textbook discussion with its iBooks Textbooks launch just two weeks ago, the company stands to significantly benefit if its iPad hardware becomes a primary tool in the move to digital textbooks.

Tied to Wednesday's announcement at a digital town hall was the government's release of a 67-page "playbook" to schools that promotes the use of digital textbooks and offers guidance. The administration hopes that dollars spent on traditional textbooks can instead go toward making digital learning more feasible.

The report notes that the K-12 textbook industry is an $8 billion per year market in the U.S. and that textbook companies have been working for a number of years on digital initiatives. The primary roadblock, according to the textbook publishers, has been that schools simply don't have the hardware necessary to make the full commitment to digital learning. 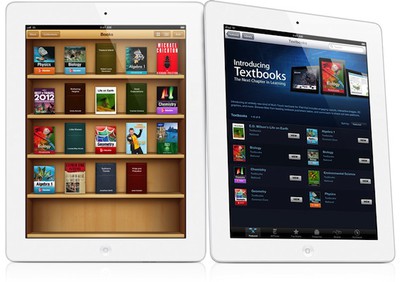 With the iPad starting at $499, pricing is undoubtedly still a significant hurdle for schools that will need to purchase the devices in significant quantities, although Apple has been rumored to be looking to bring the entry-level pricing down in the coming months by continuing to offer the iPad 2 alongside the new iPad 3.


While I normally would agree with you, paying $300+ every semester for books seems like a unnecessary waste.
Score: 12 Votes (Like | Disagree)


Never mind that, they've got the next 5 years all figured out, at the very least.
Score: 9 Votes (Like | Disagree)


Other than the fact that they are big, heavy, hard to store, don't update, and are outrageously overpriced, no. My summer job was moving books from the local schools and it is a HUGE pain. Digital books would benefit schools immensely.
Score: 9 Votes (Like | Disagree)

Good, it's about time. Heavy, expensive non interactive textbooks are unnecessary relics in the digital age.


While I like the idea of digital textbooks, the iPad is $500 before you even have a single book loaded on it. Since the books cost $14.99 and assuming you get the entire book instead of just chapters, you are looking at $630 just to provide six textbooks on a device that will last between 3 - 5 years. The cost of the average K-12 textbook is ~$60 to $80, which puts the cost around $360 - $420 and will last between 3 - 5 years. Even if the government does subsidize the iPads, schools are government funded entities anyway, so, as a taxpayer, you are still paying more for something that does the same job as a regular textbook.


I think the digital textbook idea will eventually replace printed textbooks, but the cost has to come down considerably before it can feasibly replace a printed book.

The other thing I worry about is that the area data density and total display area is a lot lower for the iPad textbooks as compared to a printed textbook. This makes comparisons harder and forces the authors to break ideas into smaller and smaller junks of information while emphasizing a "powerpoint" or presentation style of data display versus a the paragraph writing styles that tend to have better information and context transfer capabilities.

Overall, there are a number of issues that need to be addressed, but it is good to see that we are starting the process.
Score: 7 Votes (Like | Disagree)

I'm sorry, but realistically, most textbooks do not need to change every year at the K-12 level.


Yes, but you still just READ them. Have you seen the free text book? The videos and interactivity are invaluable, IMO. It's becoming clear that children learn in many different ways. My son is developmentally disabled and while he knows how to read, it is extremely difficult for him. Those who are resistant to this leap forward in learning are not getting the full picture. You are not replacing a paper text book with the same book on an iPad. You are replacing it with an amazing enhancement to the entire learning process.
Score: 6 Votes (Like | Disagree)

While I normally would agree with you, paying $300+ every semester for books seems like a unnecessary waste.


Shoot, I spent upwards of $500 some semesters, and I was a lowly business major. Some of my pre-med / bio friends were closer to $1k. As long as they lower the cost of the e-textbooks in conjunction with moving to an iPad as the primary "book," this is actually going to be a financial benefit to college students.

A $499 iPad at the beginning of your first year would more than pay for itself if they can reduce prices of the books by a substantial amount.
Score: 6 Votes (Like | Disagree)
Read All Comments

Friday May 7, 2021 1:51 am PDT by Tim Hardwick
An early look at an ongoing analysis of Apple's App Tracking Transparency suggests that the vast majority of iPhone users are leaving app tracking disabled since the feature went live on April 26 with the release of iOS 14.5. According to the latest data from analytics firm Flurry, just 4% of iPhone users in the U.S. have actively chosen to opt into app tracking after updating their device...
Read Full Article • 183 comments