At its education-focused media event today, Apple introduced iBooks 2, an updated version of the company's e-book software for iOS devices. The update comes as part of a push into interactive digital textbooks in partnership with a number of major publishers. 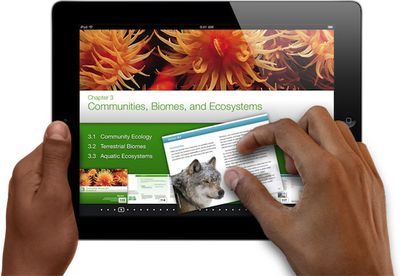 From the iBooks 2 description:

- Experience gorgeous Multi-Touch textbooks designed for iPad
- iBooks textbooks are filled with interactive features, diagrams, photos, and videos
- Tap to dive into images with interactive captions, rotate 3D objects, swipe through image galleries, watch videos in full screen, and more
- Use a finger as a highlighter when swiping over text in a textbook
- Take advantage of Study Cards to help you memorize important highlights, notes, and glossary terms
- Tap glossary terms to see definitions of key topics and concepts without leaving the page

Apple is partnering with McGraw-Hill, Pearson, and Houghton Mifflin Harcourt on the textbook front, with the three companies currently responsible for 90% of textbook sales in the United States. McGraw-Hill and Pearson are rolling out a handful of introductory titles today, with more coming soon.

Apple's initial focus for its textbook effort is on high school textbooks, with books priced at $14.99 or less. Authors can continually update their content, and the students get to keep their copies indefinitely.

iBooks 2 is a free download from the App Store, available as an update to the existing iBooks app.

iTunes 10.5.3 allows you to sync interactive iBooks textbooks to your iPad. These Multi-Touch textbooks are available for purchase from the iTunes Store on your Mac or from the iBookstore included with iBooks 2 on your iPad.

skellener
So...still no way to read iBooks material on a Mac huh?
Score: 9 Votes (Like | Disagree)

iDemiurge
I'll voice it here again. No iBooks for Mac is very frustrating. Will have to take my readings elsewhere.
Score: 9 Votes (Like | Disagree)

This means the average textbook author makes $12,000 on sales. The problem is that to write the textbook, the author needs to work nearly 24-hours a day for at least 5 years. That is very little money for that much work.

This is awesome! But it still doesn't change the price of high school text books. The books are bought by the students. So if the school plans on paying for them, it will have to buy a new set of books every semester for $14.99 per student. Typically high schools use books for 3 to 5 years and they cost about $100, but they can pass them from student to student. With this price point, the cost of the books for the schools will be $14.99 * 5 years * 1 to 2 semesters per student (depending on whether it is a 2 or 1 semester course). So really, it will cost schools $75 to $150 per 5 years, which is about what they pay now for a single text book.


Yes but your forget, the students get to keep their textbooks (not give it back), new kids get brand new books (not a book full of highlighted material, and doodles on the sides), plus the content is more interactive.

So if the cost is the same for schools, they can give their students more for the same price. Plus I think Apple must be setting up some volumen purchasing scheme, where Schools can get a decent discount for buying say 50+ books.
Score: 7 Votes (Like | Disagree)

Textbooks are not overpriced.

A single author usually has to work nearly 24 hours a day for 5 years to write a single textbook on a single topic of a subject.

Since the total sales of a textbook are usually less than 1500 copies, it is a huge investment to write a textbook.


oh thats funny how exactly is a new edition released every 2-3 years then?

I suppose they're writing brand new textbooks are they? Pretty sure they're just trying to get as much money out of students as they can so they don't but used ones.

But yeah, I'm sure writing 1 textbook takes a long time, revising and rereleasing it to screw students over though, does not.
Score: 6 Votes (Like | Disagree)

This is awesome! But it still doesn't change the price of high school text books. The books are bought by the students. So if the school plans on paying for them, it will have to buy a new set of books every semester for $14.99 per student. Typically high schools use books for 3 to 5 years and they cost about $100, but they can pass them from student to student. With this price point, the cost of the books for the schools will be $14.99 * 5 years * 1 to 2 semesters per student (depending on whether it is a 2 or 1 semester course). So really, it will cost schools $75 to $150 per 5 years, which is about what they pay now for a single text book.


If your theory holds up, at the very least the 5 year old textbook has up-to-date information if it were an iPad version.

Students purchasing a textbook at $15 is a lot better than what I paid for textbooks. Schools would also have a different buying plan I'm sure, since students don't get to keep the iPad.
Score: 4 Votes (Like | Disagree)
Read All Comments