Apple's forthcoming iOS 5 contains code that, if activated, would allow users to connect a Bluetooth wireless keyboard to the second-generation Apple TV. The new Apple TV contains a combination Wi-Fi/Bluetooth chip, but the Bluetooth functionality is not enabled in its present state. 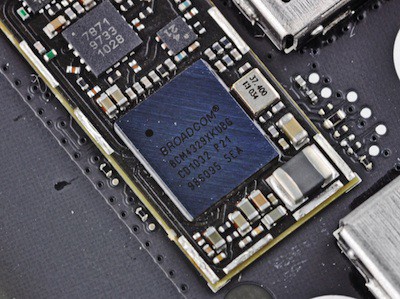 
- "Your Apple TV is paired with this %@"
- "The pairing attempt was unsuccessful. Make sure your device is in range of this Apple TV, turn on and 'discoverable.' When ready, click Continue to try again."

The ability to pair a Bluetooth keyboard with the Apple TV would obviously make for significantly easier text entry, simplifying such tasks as initial setup with iTunes Store accounts and Wi-Fi network passwords as well as day-to-day content searching.

But activation of the Apple TV's Bluetooth capabilities could also open the door to a host of other developments on the platform if Apple were to allow third-party apps on the Apple TV. Such possibilities include the ability to use other Bluetooth peripherals such as gaming controllers.

With the Apple TV running on the same iOS code base as the company's mobile devices, app development for the Apple TV should be a relatively straightforward process once design considerations for the lack of direct touch input and other differences in usage are accounted for. Apple CEO Steve Jobs even acknowledged at the time of the Apple TV's debut last September that the company could launch an App Store for the device when the time is right.

nate13
a $100 fully functional iOS/ basic computer on an existing piece of hardware? With awesome connectivity to the most popular PC music player/ smartphone/ tablet/ iTouch, access to a wide range of existing application code? FOR $100 DOLLARS!?

I'm sorry, but that would be absolutely genius- we truly are in the Post PC era.
Score: 7 Votes (Like | Disagree)

Yes please! YouTube is so impractical without a keyboard.

definitive
would be nice if apple tv had a safari browser built in. would go nice with a wireless keyboard.
Score: 5 Votes (Like | Disagree)

macduke
Magic Trackpad for Safari and simple games like Angry Birds would be even better.

I love playing my iPad 2 on the aTV with iOS 5. I think Apple should release a remote app for games on aTV. That way if you only owned the aTV version, you could still play from your iOS device. It could provide an SDK for devs that could load in the custom UI for controls and provide other feedback such as inventory or in-game map. This has three benefits: eliminate some of the lag of streaming from one device to another (controls can sometimes lag when streaming the whole game over video), provide better battery life for the controller device, and simplify all the separate remote apps into one, provided by Apple, with an SDK.
Score: 4 Votes (Like | Disagree)
Read All Comments