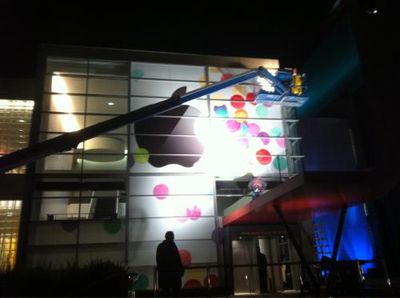 Andrew Stern provided this photo of Apple already preparing the Yerba Buena Center for the Arts a week ahead of schedule. Apple just today invited select media to an event on March 2nd at 10 a.m. Pacific. While Apple is expected to release the new MacBook Pros tomorrow (Thursday), Apple is not holding a special media event for that launch.

The image doesn't match up with the invite which clearly hinted at an update to the iPad. Instead, it shows colorful dots surrounding an Apple logo.

Update: MacLife posts several more shots from tonight as the panels were still being put up.

Update 2: Kiel Oleson (@kielo) was kind enough to take this photo of the finished display:

Monday September 26, 2022 7:34 am PDT by Sami Fathi
Today marks exactly two weeks since Apple released iOS 16 to the public. Besides the personalized Lock Screen, major changes in Messages, and new features in Maps, the update has also seen its fair share of bugs, performance problems, battery drain, and more. After major iOS updates, it's normal for some users to report having issues with the new update, but such reports usually subside in...
Read Full Article • 207 comments