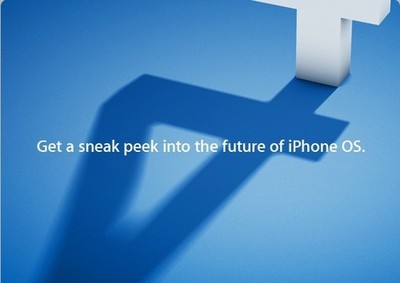 Gizmodo reports that Apple has sent out media invitations for a preview event scheduled for this Thursday, April 8th, to show off iPhone OS 4.0. The event is scheduled to begin at 10:00 AM Pacific Time in the Town Hall on Apple's Cupertino, California campus.

Reports of iPhone OS 4.0 features began to surface in January ahead of the iPad media event, but the software was not included in that presentation. At the time, claims of new multi-touch gesture support, multitasking, and a user interface refresh were making the rounds. Multitasking has been the focus of a number of subsequent reports, with a recent one noting that iPhone OS 4.0 will carry an implementation similar to that of Expos in Mac OS X. Other rumored features include a unified inbox for multiple email accounts and the ability to place contacts directly on the home screen.

Evidence of iPhone OS 4.0 in testing appeared late last year, and the new operating system is presumed to be introduced alongside new iPhone hardware sometime in the June-July timeframe.