Back in March, Hyper released its HyperJuice Magnetic Wireless Battery Pack for the iPhone 12 lineup, promising customers an easy way to wirelessly charge their devices on the go. At the time, there were relatively few options for portable MagSafe-compatible battery packs on the market. Now, though, thanks to Apple's recent release of its own MagSafe Battery Pack, there is a little more competition, and Hyper's battery pack stacks up as a worthy competitor. 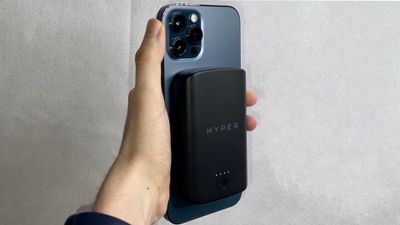 One of the most eye-catching aspects of the battery pack is its size. Like Apple's ‌MagSafe Battery Pack‌, Hyper sells one battery pack for all iPhone 12 models, meaning the size must be unawkwardly big enough for the iPhone 12 Pro Max but remain small enough to fit on an iPhone 12 mini.

I used it with my ‌iPhone 12 Pro Max‌, and I found it to be too bulky with its design, although as a disclaimer, I do have rather small hands. The battery pack has smooth, curved edges on either side, so it's relatively comfortable and natural to hold, but difficult to use your iPhone one-handed normally with it attached.

In practice, I found that the battery pack's design leads it to rotate ever so slightly if you're typing or on a phone call. It's definitely not a deal-breaker, and some blame can be put on Apple for the strength of the magnets. Overall, though, the battery pack stays firm and set in place in casual use.

If build quality is something you're concerned about, you shouldn't be. Hyper's battery pack is an excellently well-built product, made with hard plastic on the front and a softer cushion-like coating on the back. The finish on the back, which attaches to the ‌iPhone‌, is highly welcomed as it not only protects the battery pack, but also the ‌iPhone‌ itself from any scratches or scuffs.

In my normal day-to-day use with it, it's held up very well and any scuffs that do appear can be easily cleaned away.

Each person's use case for a battery pack will differ, but in my experience, attempting to use the battery pack while shopping or while out on a quick jog with it in my pocket proved to be a challenge. In other situations though, such as laying in bed without a wire nearby or at your desk, the battery pack can come in handy thanks to the ease of simply attaching it to the back of the ‌iPhone‌ without the hassle of wires.

On the performance side, the Hyper battery pack features a 5000mAh, 18Wh battery that provides power to Apple devices at 7.5W. You can use the pack as a standard portable power brick with a USB-C port that provides power at 12W, which can be convenient if you have a non-MagSafe device that needs a charge. That USB-C port on the battery pack can also be used to charge both the ‌iPhone‌'s battery and the pack itself at the same time when attached.

Hyper's battery pack has a 5000mAh, 18Wh battery, which given its size is impressive. Each person's direct experience with the battery pack in terms of how much it can charge their device will vary, depending on several factors.

With Hyper's battery pack, however, you should expect to get a sufficient charge. In my experience, with the phone left untouched, it gave me around 73% of a charge on an ‌iPhone 12 Pro Max‌, and you'll obviously get a greater percentage of a refill on iPhones with smaller battery capacities.

The ‌iPhone 12‌ is the first ‌iPhone‌ to bring Apple's MagSafe technology, which originated in a different form on the Mac, to the ‌iPhone‌. ‌MagSafe‌ is the future of the ‌iPhone‌, as Apple will likely eventually rely on it entirely for power with the rumored removal of the Lightning port within the next few years.

Having said that, ‌MagSafe‌ on the ‌iPhone‌ is still a fairly new technology, and the accessory industry that it has begun to create will only become more robust and diverse with options as the years go by.

Hyper's Magnetic Wireless Battery Pack does what it promises to do; it provides your ‌iPhone 12‌ with a enough extra amount of juice to help you get through your day. Depending on your use case, it can be a great accessory for customers of the ‌iPhone 12‌ lineup looking for an easy way to charge their iPhones on the go.

Everyone's lifestyle is different, and some may find that Hyper's offering fits even better into their daily routine than it did for me. Either way, for $39.99 and a 5000mAh battery, Hyper's Magnetic Wireless Battery Pack is a top-tier portable wireless charger, especially when Apple's offering is more than twice the price.

Hyper's Magnetic Wireless Battery Pack can be purchased on its website for $39.99.

Note: Hyper provided MacRumors with a HyperJuice Magnetic Wireless Battery Pack for the purpose of this review. No other compensation was received. MacRumors is an affiliate partner Hyper Shop. When you click a link and make a purchase, we may receive a small payment, which helps us keep the site running.

The biggest problem with these battery packs is you can’t charge them via MagSafe (except for Apple’s, which requires you attach it to the phone). I have MagSafe charging stands in my house and car and can’t juice up any of these battery packs without getting out a cord. Just when you thought cords were going away…

Bought this unit and it was DOA. Hyper demanded a VIDEO of the problem then made me pay for return shipping. They suck.

I bought a hyper 100W usb-c charger and it was DOA. I got a replacement and it was DOA. They must have no QC or something. Thank goodness I bought through B&H who have excellent customer service. DON'T GIVE THIS COMPANY YOUR DOLLARS YOU WILL REGRET IT.
Score: 6 Votes (Like | Disagree)

Sean J
All these battery pack things remind of 20 years ago and the add on sleeves for the original Compaq iPaq…;)
Score: 5 Votes (Like | Disagree)

Taipan
The reply to everyone who said Apple‘s battery pack was too fat and ugly.
Score: 4 Votes (Like | Disagree)

Am I the only one who finds the form factor of the phone based magsafe to be awkward and suspects that Apple will come out with a magsafe 2 sooner than later to address that kind of problem?

MagSafe on iPhone should have just been based on the Smart Connector
Score: 4 Votes (Like | Disagree)

Wouldn't that have been ingenious? I presume more efficient charging, and we could have had interactive accessories (keep the magnet to ensure the phone is properly seated and secured).

Way more efficient. And allows data transfer too! One step closer to a "portless" iPhone
Score: 3 Votes (Like | Disagree)
Read All Comments

Wednesday November 17, 2021 11:28 am PST by Eric Slivka
One of the hottest electric vehicles at the moment is Ford's Mustang Mach-E, and I recently had a chance to spend some time in a 2021 model in First Edition trim to test out all of its features including the SYNC 4A infotainment system on a massive 15.5-inch portrait display with support for wireless CarPlay. I went hands-on with the 2021 F-150 hybrid with SYNC 4 a few months ago, but the...
Read Full Article • 182 comments

Monday November 8, 2021 2:32 pm PST by Juli Clover
Nanoleaf, known for its HomeKit-enabled accent lights, recently launched its most futuristic and modern looking lighting product yet - Lines. Lines are modular LED light bars that are illuminated at the back and can be arranged into different patterns and shapes for a unique design. Prior Nanoleaf products have all been panels in various shapes with LED lights in the corners, but the Lines...
Read Full Article • 40 comments

Monday November 1, 2021 3:00 am PDT by Eric Slivka
Anker's audio brand Soundcore last month announced the Soundcore Frames, modular Bluetooth glasses frames that offer open-ear audio and interchangeable front frames for a variety of looks. The Soundcore Frames start at $200 for a standard kit and begin shipping today, but I've been trying them for the past couple of weeks and have come away impressed with their looks, versatility, and...
Read Full Article • 22 comments

Monday October 25, 2021 6:16 am PDT by Joe Rossignol
Apple's new 14-inch and 16-inch MacBook Pro models will begin arriving to customers this Tuesday, October 26, and ahead of time, the embargo has lifted on the first reviews of the notebooks across media publications and YouTube channels. Image Credit: The Verge We've rounded up more video reviews of the new MacBook Pro models in a separate story, while highlights from written reviews can be ...
Read Full Article • 382 comments

Monday October 25, 2021 9:46 am PDT by Juli Clover
Alongside new MacBook Pro models, the AirPods 3 are set to launch on Tuesday, October 26, and ahead of tomorrow's official release date, reviewers and YouTubers have shared reviews on Apple's latest earbuds. We've highlighted video reviews of the AirPods 3 in a separate article, and excerpts and details from written reviews can be found below. Design Gizmodo reviewer Andrew Liszweski...
Read Full Article • 56 comments